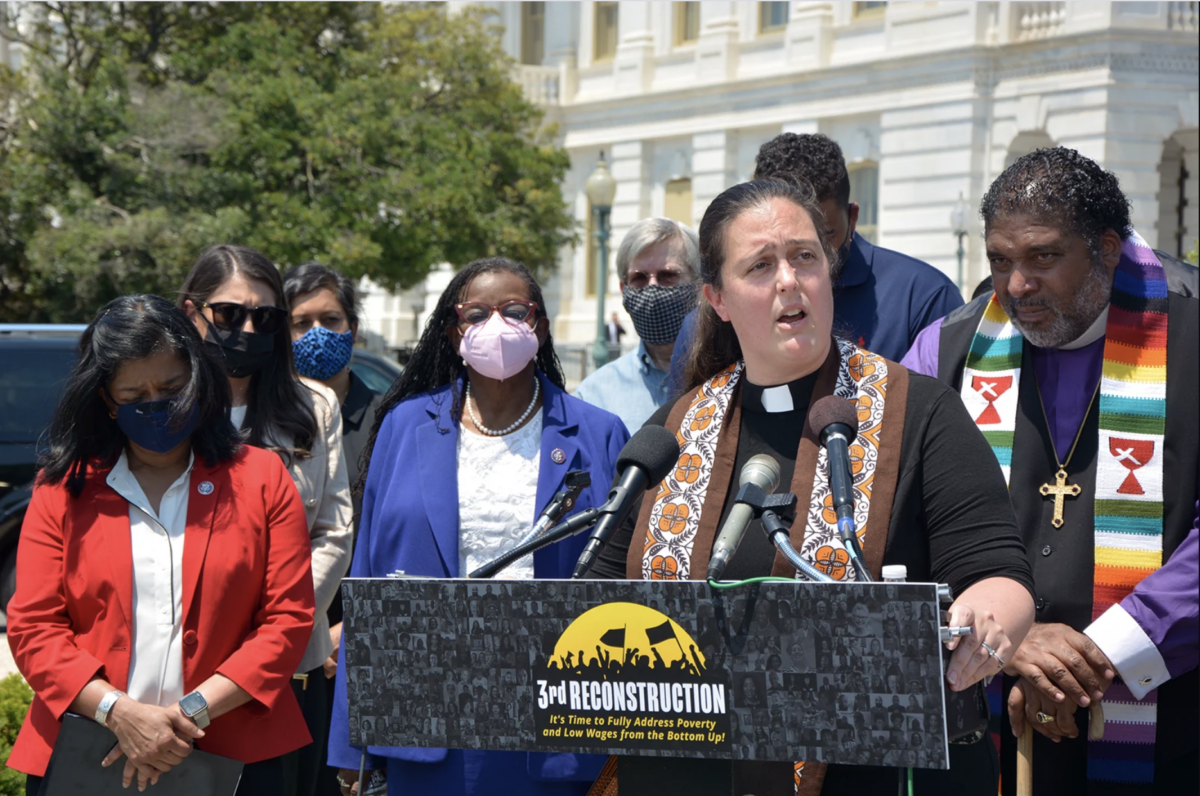 Poor People’s Campaign co-chair the Rev. Liz Theoharis speaks during the announcement of a new resolution titled “Third Reconstruction: Fully Addressing Poverty and Low Wages From the Bottom Up,” May 20, 2021, on Capitol Hill in Washington, D.C. Photo: Jack Jenkins/RNS

[Religion News Service] Nearly 100 protesters were arrested July 19 at a women’s march in Washington, D.C., while advocating for legislation to protect voting rights and demanding relief for marginalized and impoverished Americans.

The Women’s Moral Monday March on Washington, organized by leaders of the Poor People’s Campaign, marked the anniversary of the 1848 Seneca Falls Women’s Convention, the first women’s rights convention in the U.S. and a landmark moment in the fight for women’s suffrage.

“173 years later, we are still being denied voting rights,” said the Rev. Liz Theoharis, the co-chair of the Poor People’s Campaign and among those arrested at the march Monday. “If we are trying to make the country a more perfect nation, it will take the leadership of all people — including women.”

The march began with a rally at the Supreme Court. As they walked down First Street to the Capitol, police began to detain the march’s organizers for blocking traffic.

“Once we took over the street, the cops acted pretty quickly to come and arrest the women who had helped to lead the action,” Theoharis told Religion News Service in a phone interview Monday.

Monday’s protesters wore sashes with the group’s demands emblazoned on them — demands also outlined in a statement signed by 100 female leaders from across the country. They had four: to end the filibuster; to pass all the provisions of the For the People Act; to fully restore the 1965 Voting Rights Act; and to raise the federal minimum wage to $15 an hour.

These demands are part of the campaign’s direct actions leading up to Aug. 6, the 56th anniversary of the Voting Rights Act of 1965. On July 5, Bishop William Barber II, co-chair of the Poor People’s Campaign with Theoharis, called for a month of “Moral Mondays” — days of nonviolent direct action and protest at state capitols and in D.C. — to save democracy and protest autocracy.

Barber was also arrested in D.C. last month while protesting outside the U.S. Senate after legislators blocked the passage of the For the People Act with the filibuster on June 22.

After the women were released from police custody Monday, they gathered at the Lutheran Church of the Reformation to the east of the Capitol, where there was singing and socializing and plenty of clapping and cheering.

Theoharis said the day’s direct action marked how far the voting rights movement has come since Seneca Falls, and how far it still has to go.

“Seneca Falls was a gathering of white women, but the gathering of women today was women from all races, all sexualities, from all parts of the country coming together and saying, ‘We have a leadership role in leading this country to justice,’” said Theoharis.

The marchers also spanned generations. Theoharis said her daughter was among a group of young women leading the march, bearing a banner with the group’s name.

“They’re the next generation of freedom fighters,” Theoharis said.

Next week, the Poor People’s Campaign will move the focus of Moral Monday actions from the nation’s capital to the states. According to a press release, the campaign’s next action will be a “Selma-to-Montgomery style, four-day march” from Georgetown, Texas, to the state capital of Austin.