[Episcopal News Service] The Episcopal Church’s presiding officers welcomed other clergy and lay leaders and Episcopalians from across the church for an online prayer service on July 17 in what was to have been the month of the 80th General Convention until the pandemic forced a one-year postponement.

The convocation of prayer opened with the Rev. Shaneequa Brokenleg, the church’s staff officer for racial reconciliation, leading a Native American direction song. Throughout the service, participants acknowledged they and the wider church worship on land originally occupied by Indigenous peoples.

“I am grateful to The Episcopal Church for honoring and remembering all First Nations peoples of this land, known as Turtle Island,” said the Rev. Cornelia Eaton, an Executive Council member from Navajo Nation. “We are sacred people of this sacred island.”

Although the threat of COVID-19 continues to shape much of the church’s work, the widespread availability of vaccines in the United States has coincided with a sharp drop in daily cases since January, and the numbers generally have remained low except in regions with low vaccination rates. This is creating opportunities for the church’s governing bodies to resume in-person gatherings. After meeting online last month, Executive Council is scheduled to travel to Maryland in October, and the House of Bishops will meet in September in St. Louis, Missouri.

The presiding officers, with Executive Council’s backing, had announced last year that the 80th General Convention would be rescheduled from July 2021 to July 2022, to ensure the large churchwide legislative gathering can be held in person in Baltimore, Maryland, as originally planned.

The extra year also provides additional time to prepare for General Convention. With one year to go, July 17 was chosen for the prayer service because it is the feast of William White, the first House of Deputies president in 1785 and later the first presiding bishop.

“Thanks be to God for the legacy of William White,” the Rev. Gay Clark Jennings, president of the House of Deputies, said in her opening remarks. “William White led the church in a time of turmoil and confusion. We, too, are preparing for General Convention in such a time, a time of pandemic, violence, inequality and environmental devastation.”

After the Scripture readings, Presiding Bishop Michael Curry preached on Paul’s first letter to the Corinthians, who were plagued by internal quarrels. “The church was dividing itself and being rent asunder,” Curry said. Paul’s guidance then still applies today: “When Jesus and his way of love are not our way, not at the center of our lives, we lose our way,” Curry said. “As his way of love becomes our way of life, we can find our way. We’ll find our soul.”

Curry also referenced a letter he issued last week with Jennings lamenting The Episcopal Church’s past participation in a system of boarding schools that, starting in the late 1800s, sought to assimilate Indigenous children into white American society by taking them from their homes for education.

Christianity often has been used to justify such racist systems and policies, Curry said, but this is based on “distortions and perversions of the faith.”

“We’ve seen such distortions of Christianity even in our time,” he said, citing the prevalence of Christian imagery displayed by the mob that stormed the U.S. Capitol on Jan. 6. “Symbols of Christianity were merged with those of white supremacy, antisemitism, hatred, violence and bigotry against all sorts and conditions of our humanity.”

Those symbols don’t represent the true faith, Curry assured. He closed with a story he has told often, about meeting a man who confessed that he and his family once were members of the Ku Klux Klan. They believed a version of Christianity based in hatred, but the man described how he later was welcomed into an Episcopal church, where members helped him realize a faith based in love.

“My friends, put Christ at the center. Put Christ in Christian,” Curry said. 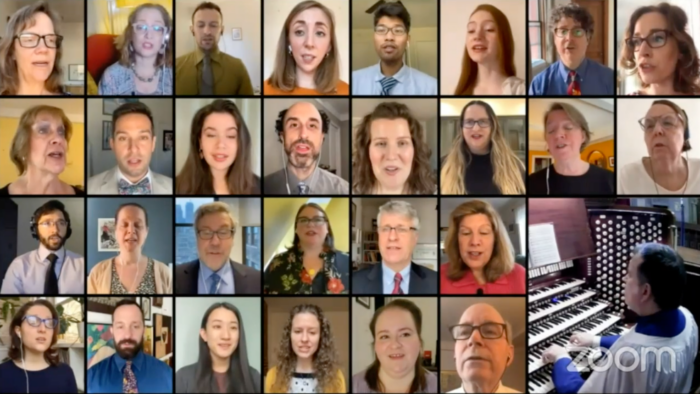 The service also featured music from the Theodicy Jazz Collective; the Diocese of the Dominican Republic’s Ministerio Adonai; a string quartet from Christ Church Cathedral in Hartford, Connecticut; and a choir from St. Bartholomew’s Episcopal Church in New York, as well as video of a lively vocal performance by Sandra Montes, Union Theological Seminary’s dean of chapel, from the 79th General Convention in July 2018 in Austin, Texas.

The 80th General Convention is scheduled for July 7-14, 2022. It is The Episcopal Church’s largest triennial gathering, a hub for legislative activity, networking and fellowship. As the church’s primary, bicameral governing body, General Convention splits its authority between the House of Bishops and House of Deputies. Among its responsibilities is approval of a three-year churchwide budget plan, as well as hundreds of additional resolutions covering everything from liturgical revisions to the church’s positions on a long list of public policy issues, such as food insecurity and comprehensive immigration reform.