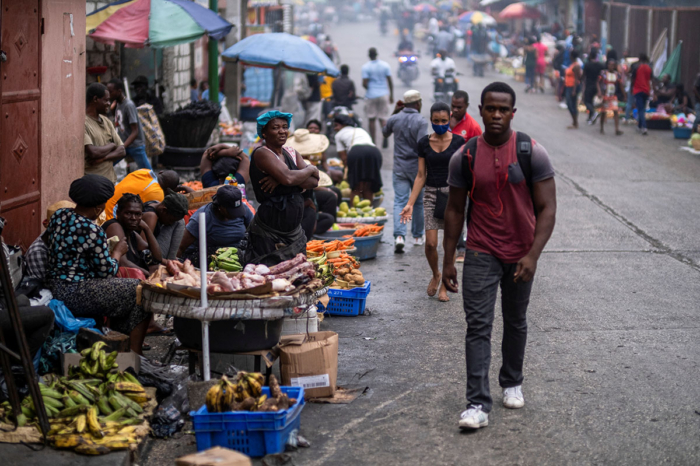 Vendors in Port-au-Prince, Haiti, sell fresh produce at a street market on July 14, a week after the assassination of President Jovenel Moïse. Photo: Reuters

[Episcopal News Service] Despite the uptick in COVID-19 cases in the country and the ever-increasing violence in the nine days since Haitians awoke to the news that President Jovenel Moïse had been assassinated, Episcopalians there are trying to serve their communities.

“Well before the assassination, gang activity, kidnappings and killings were on the rise,” Kenneth H. Quigley, president of the board of St. Vincent’s Center for Children with Disabilities in Port-au-Prince, told supporters via email on July 14. “The violence threatens not only the individual safety of all Haitians, but also exacerbates food insecurity, limits access to fuel and other essential consumables. It threatens the progress of many of our Haitian partners who work with great resolve in the face of uncertainty, including the staff at St. Vincent’s. The daily suffering of Haitian citizens is unimaginable, and has worsened, particularly in the last three years.”

People are scared by the growing threat of violence, the Rev. Markendy Jean said recently via WhatsApp. Writing to Dianne Pizey, who chairs the Haiti Committee at St. John’s Episcopal Church in Minneapolis, Minnesota, Jean added that, in the town of Gressier, “businesses and the supermarket are open” but people are watchful about possible violence. Jean is rector of Gressier’s St. Philippe and St. Jacques parish, whose school St. John’s helps support.

Gressier is west of Port-au-Prince, the Haitian capital. The Episcopal Diocese of Haiti is numerically the largest of The Episcopal Church’s 109 dioceses.

St. John’s partnership with St. Philippe and St. Jacques parish began in 2007. St. John’s raises $22,000 a year to pay the salaries of teachers in the parish’s school. Classes have been disrupted for the past two years because of the pandemic and the political violence. St. John’s has still been paying the teachers, Pizey said.

St. Philippe and St. Jacques’ school is part of an extensive network run by the diocese to educate Haitians from preschool to university level. During interruptions in schooling, however, Haitians could not turn to the internet for online instruction.

“Many higher institutions have tried to give online courses but with great difficulty,” the Rev. Kesner Ajax recently told ENS. His efforts to teach at the diocese’s theological seminary have been hampered by the weakness and quality of the internet connection. The same is true for the rest of the diocese’s schools,” said Ajax who coordinates the diocese’s partnership efforts.

Pizey told ENS on July 15 that she and others from St. John’s have been unable to travel to Haiti for the last three years because of the violence. The main national highway between Port-au-Prince and the Léogâne-Gressier area has become too dangerous because of gun violence and kidnappings, she said. Dr. Frantz Codio, the Haiti director of Haiti Companions, recently told Pizey that he still travels over the road once a month to buy medical supplies in the capital. Codio also said that the organization continues to run its monthly clinics in the villages of Collin, Jasmin and Ti Boukon.

Haiti Companions developed out of the relationships that St. John’s and another church in Atlanta, Georgia, had with St. Philippe and St. Jacques. What began as twice-yearly clinics staffed by American volunteers has grown into a Haitian-run operation of monthly medical and dental clinics that treat about 3,000 people annually.

The clinics began offering face masks early in the pandemic.

Haiti’s instability has been exacerbated by the COVID-19 pandemic. The country had seemingly avoided the worst of the pandemic until recently. Johns Hopkins University’s COVID-19 tracker shows 19,374 confirmed cases and 487 deaths as of July 15. However, health experts say that those numbers are major undercounts.

Among those deaths are three Episcopal leaders. The Rev. Lucien Bernard and the Rev. Robert Joseph, the rector and vice-rector of the Episcopal University of Haiti, respectively, both died of COVID-19 days apart in early June. The Rev. Fritz Lafontant, 94, a veritable icon of the diocese, succumbed to the disease on June 28. Lafontant was a founding member of Partners In Health and founding director of Zanmi Lasante, Haiti’s largest health care provider outside the government, which is based in Cange in the central plateau.

Their deaths were followed by the death from liver failure of the Rev. David César, head of the music school at Holy Trinity Cathedral and director of L’Orchestre Philharmonique, both in Port-au-Prince.

Until recently, Haiti was the only country in the Western Hemisphere without any COVID-19 vaccines. It reportedly missed a paperwork deadline this spring to receive 760,000 AstraZeneca shots from COVAX, the global vaccine-sharing effort. Plus, the country’s health ministry said it was worried about AstraZeneca’s side effects and how it would store and administer the required two shots, saying it preferred a one-shot vaccine. COVAX announced July 15 that a shipment of 500,000 Moderna doses donated by the United States had reached Haiti.

Episcopalians are offering help. Episcopal Relief & Development partnered with the diocese in 2020 on an emergency response program to distribute 3,316 reusable masks to several communities. The masks were all made locally in Haiti through a grant with Episcopal Relief & Development. The organization also worked with the diocese, in collaboration with Haiti’s Ministry of Health, on COVID-19 prevention messaging in the same communities.

Ajax told ENS that the diocese received a $40,000 pandemic relief grant from The Episcopal Church’s Executive Council for churches to buy hand sanitizers, soap, bleach and water containers to put at the entrance of their buildings.

The country’s violence and the pandemic have prevented the diocese from electing a new bishop to succeed Bishop Jean Zaché Duracin, who retired March 1, 2019. The Very Rev. Joseph Kerwin Delicat, dean of Holy Trinity Cathedral, was elected bishop coadjutor in June 2018; however, the validity of the election was challenged. Delicat eventually failed to receive the necessary consents from The Episcopal Church’s dioceses and bishops.

Bishop Todd Ousley, who heads the church’s Office of Pastoral Development that assists dioceses with bishop searches, told ENS that Haiti has not been able to schedule a new election because of the pandemic, government instability and civil unrest, and the challenges of power outages and lack of reliable internet or other communication mechanisms.

“Despite these monumental challenges, the Standing Committee (continuing to act as Ecclesiastical Authority) has met the challenges with grace, even in the face of challenges to some members whose terms expired in January without convention elections,” Ousley said. Those terms are continuing until elections can be held, he said.

Many Haitians and their supporters would like to see the country use the crises to move Haiti from what many call an “aid state” dependent on billions of dollars in foreign aid to one that can stand on its own in peace. One recently formed group, the Commission for a Haitian Solution to the Crisis, includes a diocesan representative. The group met July 13 in a Pétionville restaurant near where the president was assassinated.

During a July 12 Episcopal Church webinar titled “Haiti Below the Surface: Challenge and Opportunity,” Alan Yarborough a church relations officer in the Washington, D.C.-based Office of Government Relations, said all of Haiti’s challenges must be considered holistically when envisioning the country’s future.

Yarborough, who served as a Young Adult Service Corps volunteer in Haiti and now chairs the church’s Haiti Advocacy Working Group, said, “international actors like the U.S. must not silo these sectors in such a way that it limits the imagination or sidelines local actors who are already hard at work.”

Before leading a prayer to close the webinar, Ousley said that The Episcopal Church needs to heed that advice as well. “Our history, which is a long one of over 150 years of engagement with the church in Haiti, is one of not listening as carefully as we should,” he said. “We’ve learned painfully the price we pay when we don’t listen and impose our ideas rather than entering into partnership with the people of Haiti.”