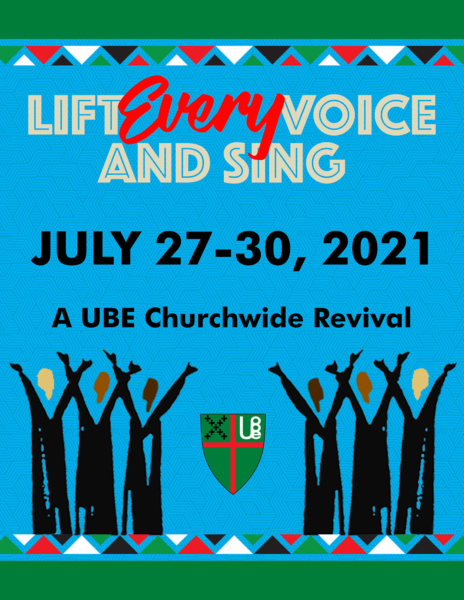 [Episcopal News Service] The 53rd annual conference of the Union of Black Episcopalians this year will include “a fresh wave of divine love, guidance and power,” in the form of a good old-fashioned revival, and everyone’s invited.

The online churchwide “Lift Every Voice and Sing” gathering July 27-30 will feature 7 p.m. EDT nightly spirited worship; daily noon plenary sessions examining systemic racism, inclusion, and challenges to voting and civil rights; a celebration of the late Rt. Rev. Barbara C. Harris, The Episcopal Church’s first woman bishop; and a commemoration of the 40th publishing anniversary of the African American hymnal whose title is echoed in the revival’s name. It will also memorialize the disproportionate number of African Americans who died from COVID-19.

“Revival has always played an important part in our relationship with God,” said the Very Rev. Kim Coleman, UBE national president. “From the days of Ezekiel when God asked, ‘Can these dry bones live?’ to a frightened, disheartened band of disciples locked away in an upper room, people of faith have hungered for a fresh outpouring of God’s Holy Spirit and a renewal in mission, purpose and identity.”

Coleman and others, including UBE Second Vice President Ayesha Mutope-Johnson, said that the isolation and disproportionate effects of the COVID-19 pandemic, coupled with racially motivated police violence and systemic racism, have created a need for revival.

“The idea is to look at our struggles of today, lament if we want, but consider the strength we have brought into today and that will take us into tomorrow with hope and joy,” Mutope-Johnson said.

Black Episcopalians “have been a gift to The Episcopal Church from the church’s early beginnings,” Coleman added. “This is an opportunity for the wider church to glimpse how people of color live into the faith and worship traditions we all hold dear.”

The revival is a partnership between UBE and the church’s evangelism team, said the Rev. Stephanie Spellers, canon to the presiding bishop for evangelism, reconciliation and creation care, in a letter to UBE members.

“The whole church has so much to learn about opening our hearts to revival and joining God’s ongoing work of transformation and renewal,” Spellers wrote. “Episcopalians and our neighbors all need an extra helping of the Holy Spirit, and this revival will unleash a fresh wave of divine love, guidance and power that will bless our church, our communities and our world.”

Revival, in the Black church, is “a complex dance of repentance, refreshment and rededication,” Spellers wrote. “It is not entertainment. It is a necessity. Especially in 2021, as we continue healing from the twin pandemics of COVID-19 and racism — both of which target and deeply wound people of color — we need revival.

“Especially as many of our Black churches hover at the brink of survival — still unable to gather in our home churches, struggling to sustain aging buildings and aging congregations, within a wider church that has always been ambivalent (at best!) about our presence — we need revival. In this moment, we are claiming that need out loud, and we know Jesus will show up.”

Mutope-Johnson said daily panel discussions and breakout sessions will echo themes from “Lift Every Voice and Sing: A Collection of Afro-American Spirituals and Other Songs,” which has “come to be identified with Black religious worship throughout the African diaspora.”

First published in 1981, the collection was the vision of the late Rt. Rev. Franklin D. Turner, bishop suffragan of Pennsylvania, who desired to produce a worship resource for the whole church that reflected the song tradition of the Black church, according to Mutope-Johnson.

Casey Jones, UBE national youth and young adult committee chair, told ENS he is “super excited” about both the upcoming revival and its youth involvement.

“Revival is an invitation to partner, not just with The Episcopal Church but with God, to reimagine tradition and to engage tradition, Scripture and reason, and chart a way forward,” said Jones. “Revivals are a piece of our collective discernment as a church, for what God’s vision and God’s just future is.”

‘Sing a Song Full of Faith’

Presiding Bishop Michael Curry will preach at the opening Eucharist on July 27 and will headline the July 28 “Sing a Song Full of Faith,” plenary. The session will focus on faith sustained through slavery, Jim Crow laws, the civil rights movement and ongoing systemic racism.

“After the civil rights bills were signed in the 1960s … we thought the struggles were over,” said Ora Houston, a former Austin, Texas, City Council member and a three-time General Convention deputy, who is also a scheduled panelist. “We could live where we wanted, ride the interstate transit, check into hotels and [believed] that we had protections if they refused to serve us. But, we didn’t share our stories with the immediate generation … and here they are facing some of the same injustices in 2021 and yet are not prepared for how to deal with those injustices.”

UBE’s revival comes after the latest audit of race in The Episcopal Church and after Executive Council last month announced the formation of a churchwide truth and reconciliation working group.

Houston, who attended her first General Convention and UBE meeting in 1985, said The Episcopal Church, despite its best efforts at racial audits and resolutions, still continues to be a white-dominated structure. “When those of us that are faithful Episcopalians try to interrupt that, [white] people leave [the conversation]. But we still seem to stay within the denomination and keep praying for and working for the justice and accountability and acknowledgment that we, too, are God’s people.”

Similarly, the Racial Justice Audit of Episcopal Leadership released April 19 revealed that The Episcopal Church is still perceived by many, if not most, active Episcopalians of color as a white church, said House of Deputies Vice President Byron Rushing, also a panelist for the session.

That revelation prompts the question, Rushing said: “How are we to be ministers to Black people in and out of The Episcopal Church — Black Episcopalians in Black congregations and in integrated and predominately white congregations — and the people of color who surround many of our churches and rarely are invited into our buildings?”

He added: “And how are we missionaries? More and more, I am convinced that our mission field is white people.”

‘Sing a Song Full of Hope’

A plenary on July 29, “Sing a Song Full of Hope,” will focus panelists on such issues as facing the disproportionate effects of COVID-19, racial injustice, police brutality and the systemic assault on voting and civil rights.

Panelists will include the Most Rev. Julio Murray, primate of the Anglican Church in Central America; the Rev. Gayle Fisher-Stewart, a former police captain and rector of St. Luke’s in Washington, D.C.; and the Rev. Altagracia Pérez-Bullard, a Virginia Theological Seminary professor.

The Rev. Landon Moore, priest-in-charge of St. George’s, Brooklyn, New York, who is also a UBE young adult leader and moderator for the session, said he will press panelists to wrestle with such questions as, “Post-George Floyd, how does love get us out of being Black and still being oppressed nowadays? How does one go about loving our neighbor and yet still combatting the horrendous sin of racism? What is a tangible act of love we can do that would combat the sin of racism?”

On July 30, a third and final discussion, themed “Facing the Rising Sun,” will focus panelists on issues of inclusion, the dispossessed and the marginalized, and will be moderated by Missouri Bishop Deon Johnson.

“It is my hope that we can and will begin a conversation around the renewal, revival and revitalization of Black communities of faith across The Episcopal Church,” Johnson told ENS via email.

“But conversation alone does not bring renewal. My hope is that the panel discussion will be the beginning of a journey, a reorientation towards sharing the Good News of Jesus Christ as uniquely expressed by the people of the African diaspora in The Episcopal Church.”

The Rev. Kim Jackson, the first lesbian elected to the Georgia State Senate, also will be a panelist. She said she wants to talk about the church’s “role as a people who follow Christ in making sure we create a system and, ultimately, a state or a nation or a world in which justice reigns.”

“I’ll talk about that from the lens of being a faith leader who engages with local elected officials, whether school board or state senators, to try to make sure that we do things like provide health care and housing to folks,” she said.

As vicar of the Church of the Common Ground in Atlanta, “a community of people experiencing homelessness, I very much feel that is the other place where the church must be,” Jackson said. “We cannot only stand and use our power in the halls of power. We must be in solidarity and relationship with people on the margins. The church is at its best when we are in both places.”

Vermont Bishop Shannon MacVean-Brown also will serve as a guest preacher. “As pandemic life begins to shift from emergency mode to reemergence, this is our chance,” she said, and people need revival more than ever.

“We’ve learned lessons about ourselves and expanded our hopes for justice even while we lived through such a devastating time,” MacVean-Brown said. “I’ve been praying we would not go back to what was, except I find myself more hopeful about our ability to be a more authentic and creative church since we’ve gone back to some basics.

“Our life together has been centered around the Bible, prayer and the fact that the church really isn’t a building, it is people. As we return, may we be revived for the work ahead. As much as I wish we could be together in person to sing, pray and encourage one another, I’m grateful for the real celebration we will have during the online revival.”

All are welcome. Registration continues through July 27.

The UBE’s annual business meeting — typically held in conjunction with the conference — is themed “Marching on Till Victory Is Won,” and is planned for July 17.

– The Rev. Pat McCaughan is a priest in the Diocese of Los Angeles and a longtime ENS correspondent.