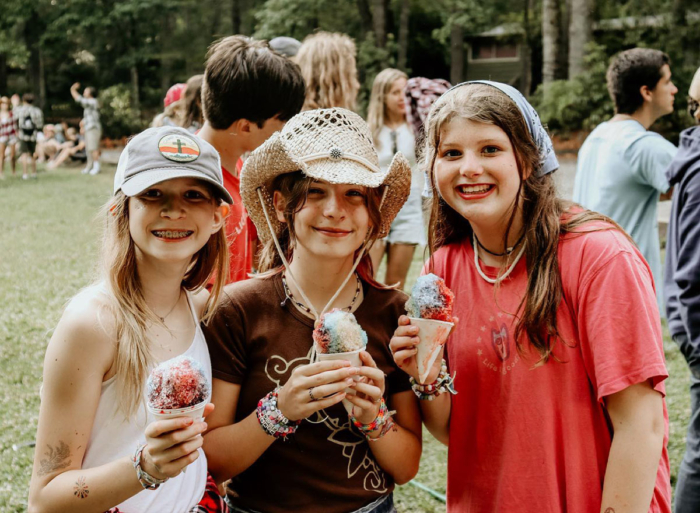 Campers enjoy snow cones at Camp Kanuga in western North Carolina earlier this month. Kanuga, the largest camp facility affiliated with The Episcopal Church, was closed in 2020 due to COVID-19. This year it is operating at 70% camper capacity. Photo: Kanuga

[Episcopal News Service] This summer, Episcopal camps and conference centers across the United States are reopening in-person programs for the first time since the start of the COVID-19 pandemic – for the most part. While a few still face the possibility of being sold, most have adapted to the now-familiar realities of the coronavirus era, adding another layer of ingenuity to a line of work that already requires multitasking and problem-solving on the fly.

For many administrators, the pandemic has been an unimaginable challenge requiring months of behind-the-scenes work to produce an experience that feels normal.

“Most camps did not run anything resembling in-person [events] last summer,” said Ashley Graham-Wilcox, director of communications and events for Episcopal Camps & Conference Centers, a nonprofit organization. Some facilities ran virtual camps or delivered “camp in a box” to participants, while a few offered different kinds of in-person experiences like mountain biking and archery, or rented cabins to families looking for a safe getaway.

“It’s not just adding the COVID layers of running camp in person; it’s also that we’re recovering, coming back from a year of totally not doing the traditional job that all of our directors and staff are trained for,” Graham-Wilcox told Episcopal News Service. “We’re shaking the cobwebs off. … I think there are parallels to what everybody’s dealing with as we figure out how to engage in the world together.” 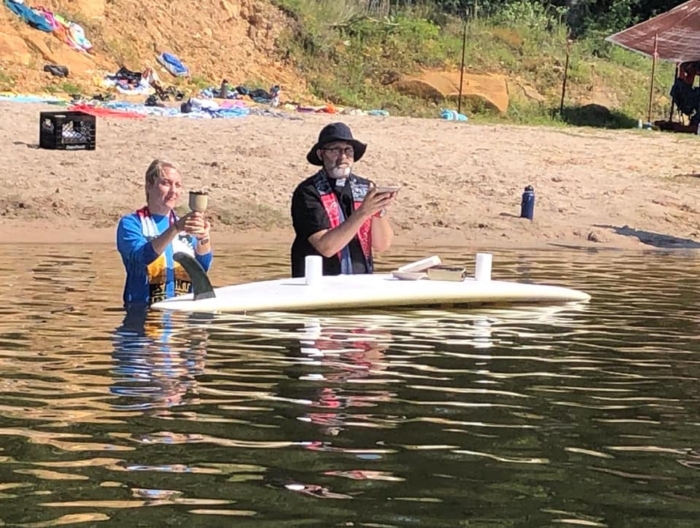 Though every facility has had to make some changes to protect the health of participants and staff, some summer camps found those to be relatively easy compared to other challenges. That’s partly because of the outdoor focus of many summer camps and because some were already operating on what is now familiar to many parents as the “pod” system: smaller groups of children – staying in the same cabin, for instance – who interact primarily with each other instead of everyone mixing together.

“That lends itself pretty naturally to all of the best practices around COVID, like keeping small cohorts together,” Graham-Wilcox said. About 12% of camps in the ECCC network were already doing that before the pandemic, and camp directors have shared tips and compared protocols during twice-weekly calls since November.

Beth Gaertner, program director at the Diocese of Oklahoma’s St. Crispin’s Conference Center and Camp, said her summer camp had been wanting to switch to a small-group model for a while, based on feedback from campers, and the pandemic presented a natural opportunity.

“This year, we are podded with our cabins,” Gaertner said. “So while it is something that we’ve changed, it’s been something we’ve been looking at changing for the past couple of years, so it’s not necessarily a bad thing for us.”

Many children attending summer camps are too young to receive any of the COVID-19 vaccines, so a common practice is to require campers to show up with a negative COVID-19 test or to test everyone upon arrival. St. Crispin’s requires campers to present either a vaccination card or a negative test administered within the past four days and also to wear masks when indoors with campers from another pod or within 3 feet of them outdoors.

Graham-Wilcox said she hasn’t heard of any facilities requiring staff to get vaccinated, but that’s really because it hasn’t been an issue.

“I think that we’ve been pleasantly surprised at how many of our staff have already been vaccinated,” she told ENS.

Instead of requiring staff to present proof of vaccination, St. Crispin’s strongly encouraged it by offering a monetary incentive. It worked, she said; all of her staff members are now vaccinated.

However, hiring enough staff to run the facilities and programming has proven to be the biggest challenge. The U.S. is experiencing a widespread labor shortage for a variety of reasons, including long-stagnant wages, riskier working conditions during the pandemic, fewer foreigners coming on work visas and more people staying at home to care for their families. Camps have been finding it difficult to hire enough employees even to run reduced-capacity programs, and a tradeoff of operating camps in smaller groups is that they often require more staff.

“It’s been challenging,” said Stratt Byars, director of Camp Kanuga in North Carolina, the largest camp facility affiliated with The Episcopal Church. “Our total camper capacity is at 70%. We wanted to hire 100% of our standard staff and probably got into the 85, 87% range.”

“There was almost universally a really hard time finding seasonal staff this year,” Graham-Wilcox said. “A lot of our camps typically use international hiring exchange programs … where we’re getting young adults mostly from Europe and they’re getting assistance with getting visas, getting over here and getting paid. That obviously was not a source at all this year.”

“Traditionally, we have about 20 young people on our staff, and this summer we started with 12,” Gaertner told ENS. “We were lucky enough to hire one halfway through the summer, but 13 is much lower than we’re used to running with, and because of that, our camp sizes have had to be smaller.”

Though there were some concerns last year about whether demand for camps would rebound this year, that hasn’t been much of a problem, camp directors said. If anything, it’s the opposite; there is sometimes more demand than the camp is able to accommodate.

“Places had waiting lists in early spring,” Graham-Wilcox said. “The demand is definitely there. Parents are ready; kids are ready. Everybody’s ready to have something fun, to do something relatively normal.”

Gaertner said many families that had sent their kids to St. Crispin’s in previous years “were excited to come back” for 2021, but the thoroughness of the camp’s COVID-19 protocols also attracted new families who didn’t feel comfortable sending their kids to other facilities.

“We have seen an influx of new families that were looking for someplace that they thought would be safe for their camper because in Oklahoma … they treat COVID like it didn’t exist,” Gaertner said. “So families that are more conscious are definitely flocking to us because we are taking those precautions.”

Fears that demand for conference centers and retreat facilities would evaporate because of the broad shift from in-person to virtual business meetings also didn’t pan out. St. Crispin’s wasn’t able to host those kinds of groups for several months last year, but many of them rescheduled their gatherings to this year.

“Our fall is super-booked up – more so than usual,” she said.

Graham-Wilcox said most Episcopal conference centers don’t cater to the large business conferences that would be more affected by the downturn in business travel. They rely largely on church groups, retreats, recovery meetings and other small affinity groups, all of which are “super-eager to get back together and to get off of being online.”

“The demand is definitely there,” she told ENS. “I’ve heard from several places that said the fall is the busiest calendar that they’ve ever seen.”

The Diocese of West Texas is even expanding its Mustang Island Community Center, adding an open-air chapel and increasing its housing capacity by 65%.

A couple of facilities, however, have not reopened. The Diocese of the Rio Grande has decided to sell its Bosque Center. The Diocese of Mississippi is still deciding what to do with its conference venue, the Gray Center, but it is planning to resume Camp Bratton-Green, which is located on the same property, next year, Bishop Brian Seage told ENS. The Diocese of Arkansas is planning to reopen Camp Mitchell next year after a period of discernment; the camp’s board of trustees will work with the diocesan chancellor to pursue charitable organization status to address the financial challenges it faces.

For the most part, though, staff, campers and retreatants are happy to be back, even if reentry has been a little bumpy.

“People have forgotten how to talk to each other,” Gaertner observed. “We’ve had a lot more campers that needed reminders about keeping hands to themselves and talking things out rather than just hitting. … But at the same time, the campers are so much more excited for everything because they have lived a life of predictability in their homes in the last year. It’s been the same day in and day out, and we are changing it up every day.”