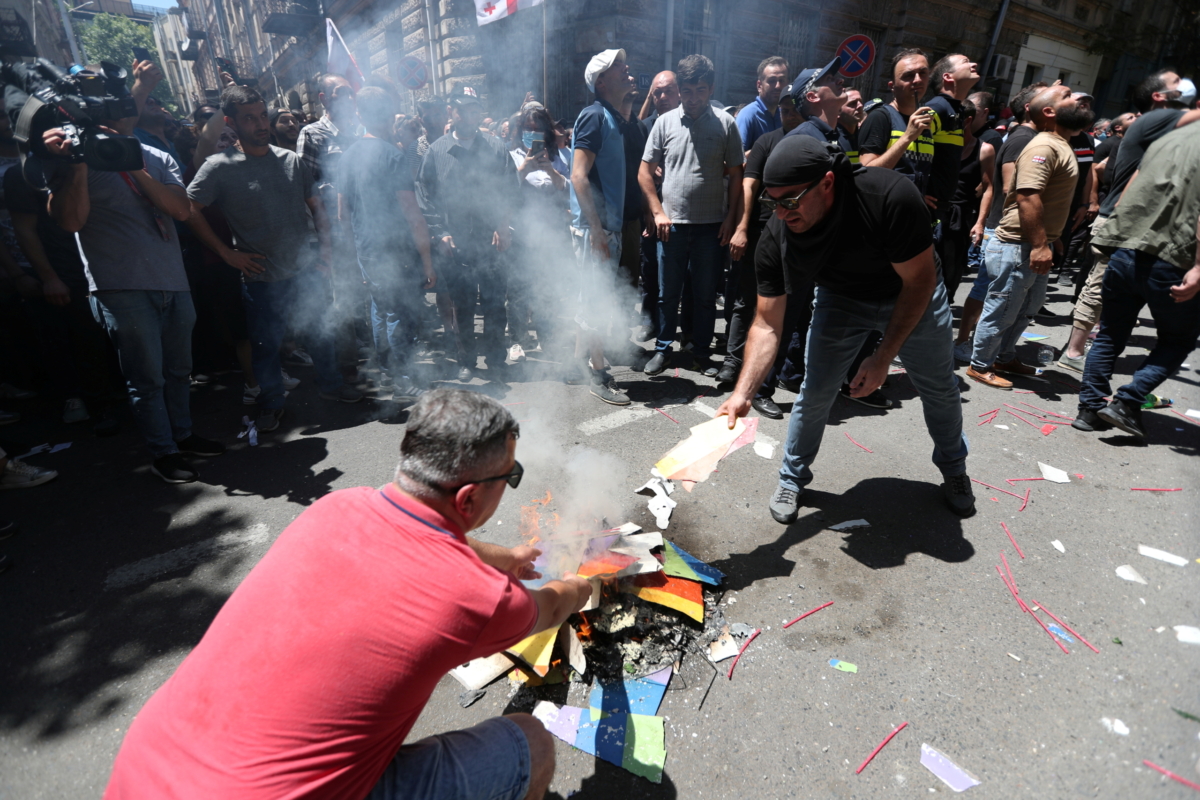 Anti-LGBTQ+ protesters burn a rainbow banner ahead of the planned March for Dignity during Pride Week in Tbilisi, Georgia, on July 5, 2021. Photo: Irakli Gedenidze/Reuters

[Episcopal News Service] Members of one of The Episcopal Church’s most isolated congregations – St. Nino’s Episcopal Mission in Tbilisi, Georgia – have found themselves on the front lines of the country’s violent conflict over LGBTQ+ rights, by virtue of the congregation’s status as one of only two LGBTQ+-affirming churches in the country.

On July 5, hundreds of far-right anti-LGBTQ+ extremists rioted in the streets of Tbilisi in advance of a planned Pride march later that day, according to Agence France-Presse. They ransacked the offices of Tbilisi Pride, destroying the rainbow flags that hung from its balconies, and assaulted more than 50 people, most of them journalists, Reuters reported, citing local police.

The organizers canceled the march for fear of further violence. On July 6, thousands of Georgians held a silent rally outside the Parliament building to protest against the homophobic riots of the previous day and support the LGBTQ+ community. However, anti-LGBTQ+ groups also rallied in counterprotest, throwing rocks at the protesters and police. As the night went on, the far-right groups took over the area and removed and burned the European Union flag flying at the Parliament building, local news outlet Civil.ge reported.

Thoma Lipartiani, the lay worship leader of St. Nino’s, told Episcopal News Service that the anti-LGBTQ+ attacks have hit his congregation hard. A former Roman Catholic and a student of Christian theology, Lipartiani founded the worshipping community in 2018, leading Liturgy of the Word services every week, along with Bible studies and English classes. St. Nino’s, which meets in the Evangelical Baptist Church of Georgia’s Peace Cathedral and is visited regularly by a priest, became an official mission of The Episcopal Church’s Convocation of Episcopal Churches in Europe in 2019. According to Lipartiani, St. Nino’s and the Evangelical Baptist Church of Georgia are the only two LGBTQ+-affirming churches in Georgia, and St. Nino’s is the only one that blesses same-sex couples. (Same-sex marriages are illegal in Georgia.) 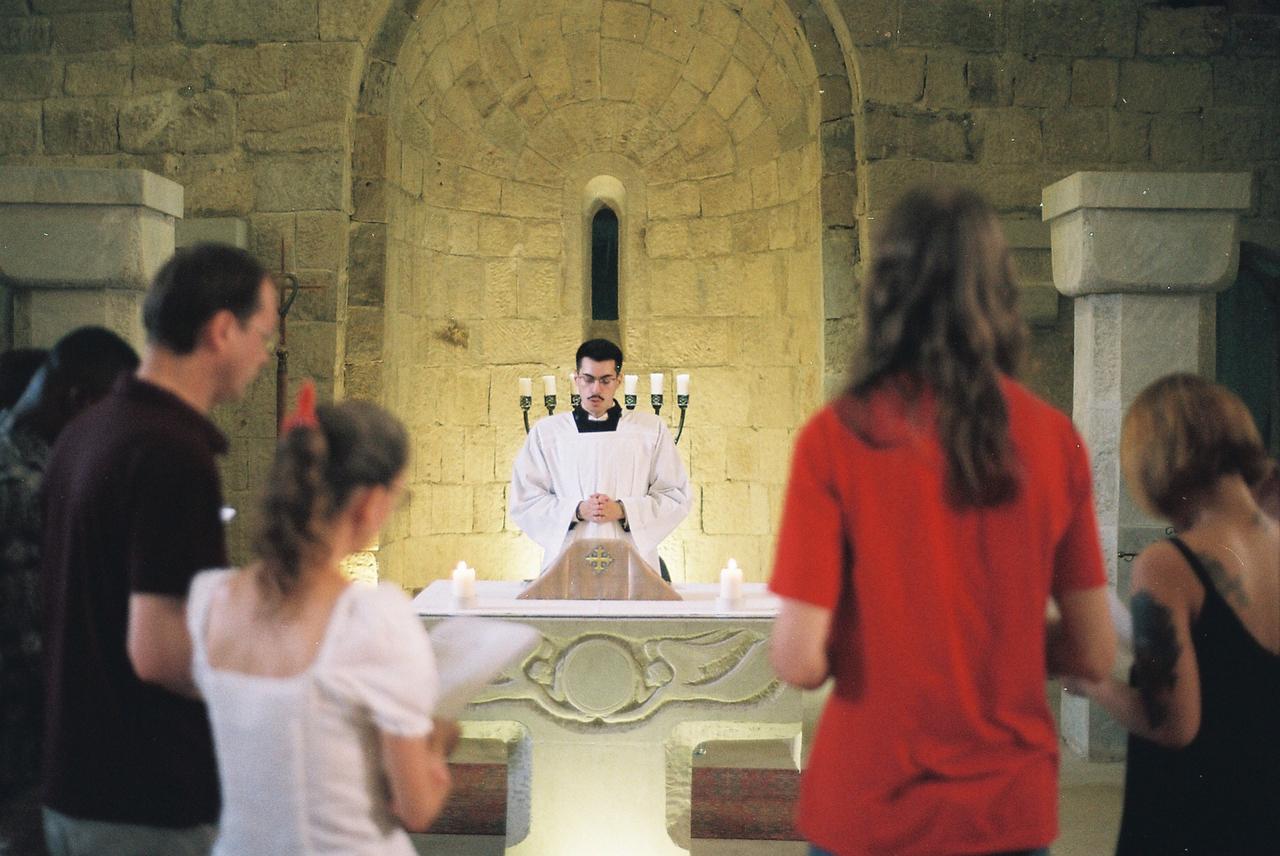 The Georgian Orthodox Church, the dominant denomination in the country, is strongly anti-LGBTQ+ and called for the cancellation of the Pride parade days earlier, saying it “contains signs of provocation, conflicts with socially recognized moral norms, and aims to legalize grave sin.” Its leaders’ condemnations of LGBTQ+ people have led to violence before. In 2013, Orthodox priests led a mob that attacked a small group observing a vigil for the International Day Against Homophobia on the Parliament steps, shouting “Kill them!” and then smashing through the windows of the van in which the group was trying to escape the scene.

In that context, being an LGBTQ+-friendly church has a different meaning than it does elsewhere, Lipartiani said.

“‘Friendly’ means that in these churches, no one will kill you because you’re gay. Because, for example, in the Orthodox Church, maybe you will be killed,” he told ENS.

Many of St. Nino’s members are LGBTQ+ and involved with Tbilisi Pride, including Nino Bolkvadze, a co-founder of Tbilisi Pride and one of Georgia’s most prominent LGBTQ+ activists, and Lipartiani himself. Nobody was in the office when it was attacked on July 5; the organization had warned everyone to stay home that morning as hate groups were gathering in the city, Lipartiani said. Giorgi Tabagari, director of Tbilisi Pride, told CNN that his team had to evacuate to different locations six times on Monday due to violent threats. 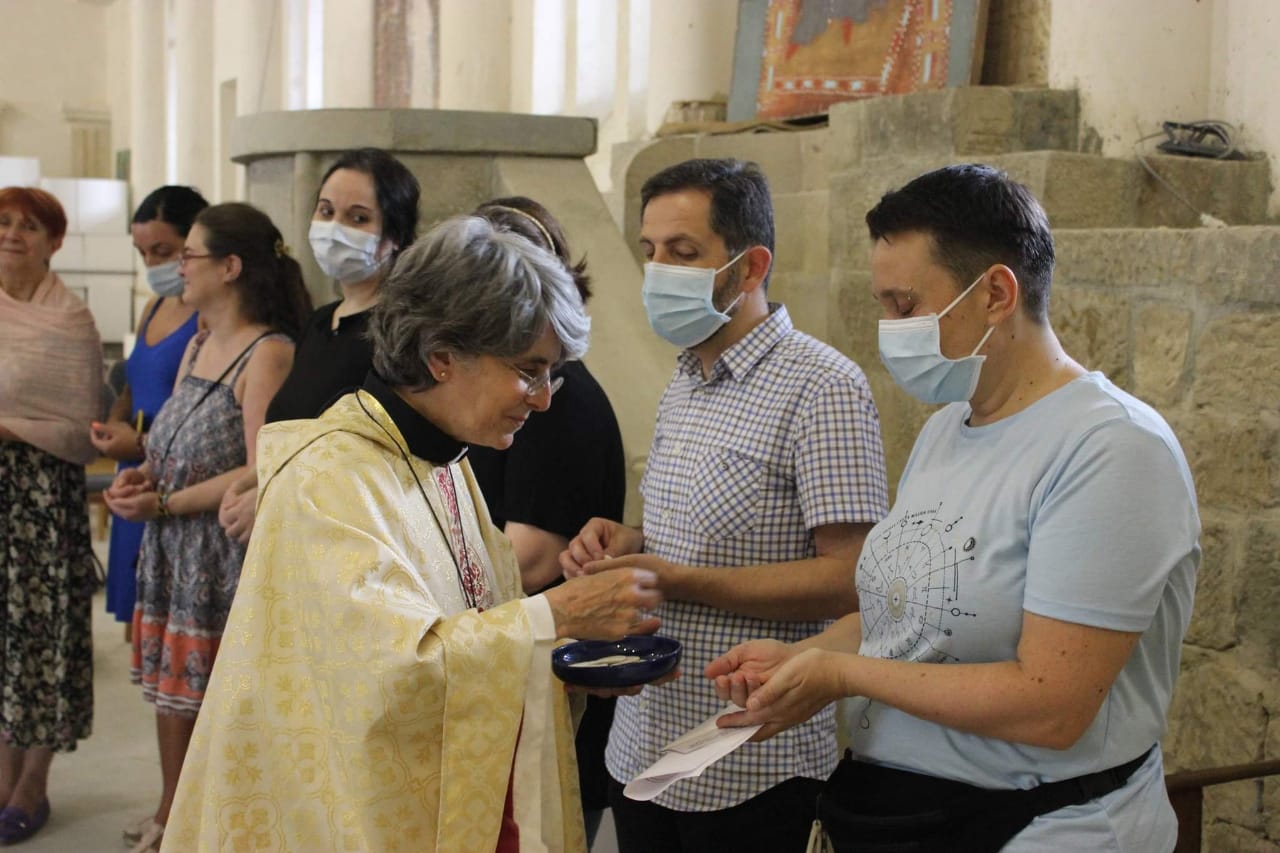 However, Lipartiani told ENS, one member of the congregation was beaten in the street on July 5 by a group led by an Orthodox priest. He was bloodied but is recovering well at home, Lipartiani said.

That evening, a police officer called Lipartiani and advised him not to hold services this week, warning that extremist groups may target the congregation. As a result, St. Nino’s will not have a service this coming Sunday. Lipartiani has also endured vulgar verbal abuse from neighbors because of the rainbow flag he flies in his window at home.

“I feel unsafe, of course,” he told ENS. “I cannot go outside with my earring. I cannot say outside who I am. I cannot say that I’m Episcopalian, even, because they also hate other religions.”

The mantra of the far-right groups, he said, is: “Georgia is for Georgian Orthodox Christians and other people are second- or third-class citizens here, and mostly they hate the LGBTQ people.” And though they don’t represent the views of most people in the former Soviet republic, they have terrorized the country with tactics like the riots this week.

“They are groups led by Russia or Russian propaganda. They still love Russia. They still love the Soviet Union. There are not too many [of them]. Most Georgians are pro-European and pro-American. [The extremists] are not many but they are very [well] organized.” 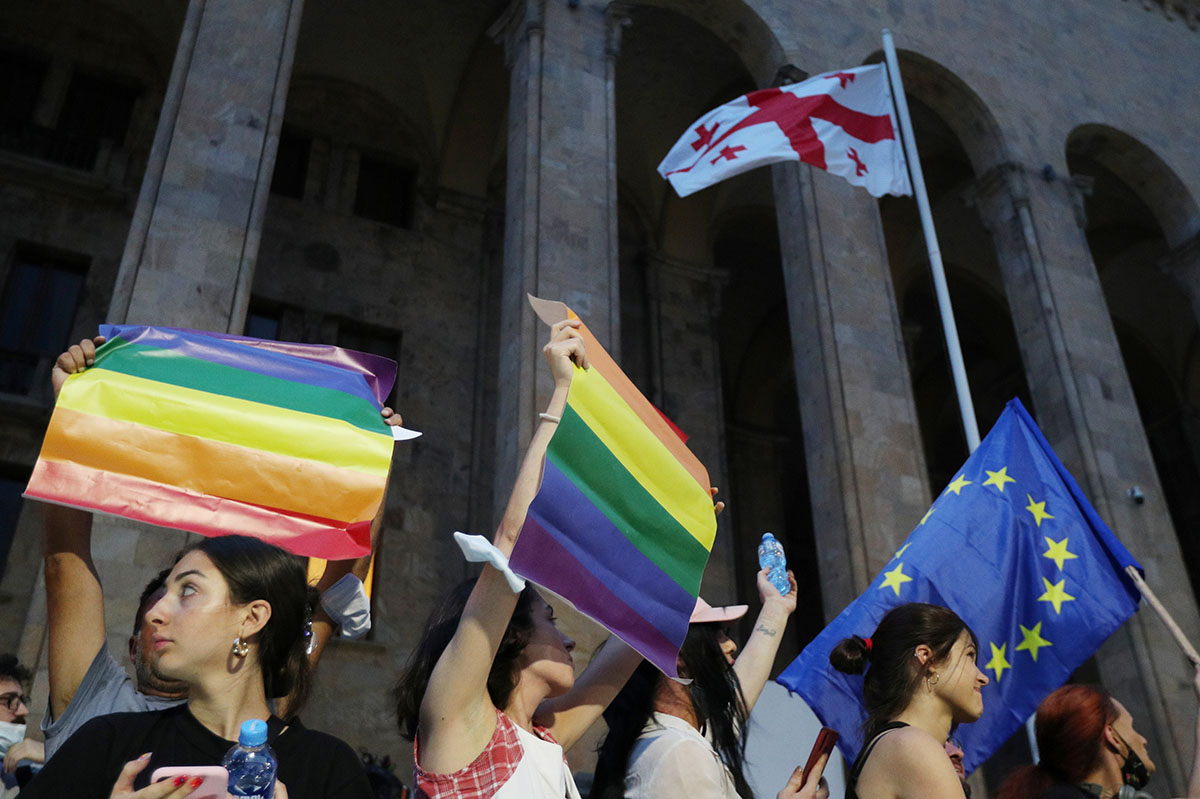 Participants hold flags during a July 6, 2021, rally in support of those who were injured during the July 5 protests, when an LGBTQ+ Pride march was disrupted by members of violent groups before it could begin, in Tbilisi, Georgia. Photo: Irakli Gedenidze/Reuters

Lipartiani said he and other Georgians are deeply concerned about the government’s apparent reluctance to crack down on these groups and to protect LGBTQ+ people and journalists. Before the riot on July 5, Prime Minister Irakli Garibashvili echoed the Georgian Orthodox Church’s call for the Pride parade to be canceled, calling it “unacceptable for a large segment of Georgian society.” Some news outlets reported that police failed to stop the violence, especially during the incident in front of the Parliament.

After the July 5 riot, the United States Embassy in Georgia issued a joint statement with 20 other embassies and diplomatic missions in the country condemning the riot and also “the failure of the government leaders and religious officials to condemn this violence.”

“Why they are not doing something, I don’t know,” Lipartiani. “So I cannot see a bright future – I cannot say.”

The Rt. Rev. Mark Edington, bishop in charge of the Convocation, told ENS he has contacted the American ambassador in Tbilisi and received “a good response there,” and he and Presiding Bishop Michael Curry wrote a letter to St. Nino’s “to let them know that the church stands with them.”

He said his goal is to support the congregation without drawing further attention to them in Tbilisi, which could make them even more vulnerable, but that the wider Episcopal Church should know about St. Nino’s and what is happening to them.

“They’re a really a remarkable and faithful group of people,” Edington said. “I’m glad that they’re there.”