[Episcopal News Service] You may not know Kelly Latimore’s name, but if you’ve been active on any Christian social media pages in the past few years, you’ve probably seen his work. His modern take on the centuries-old tradition of iconography presents familiar biblical scenes in unexpected ways – such as a pietà scene with a fallen Jesus who looks like George Floyd – as well as saintly depictions of modern figures from Dietrich Bonhoeffer to Marsha P. Johnson. 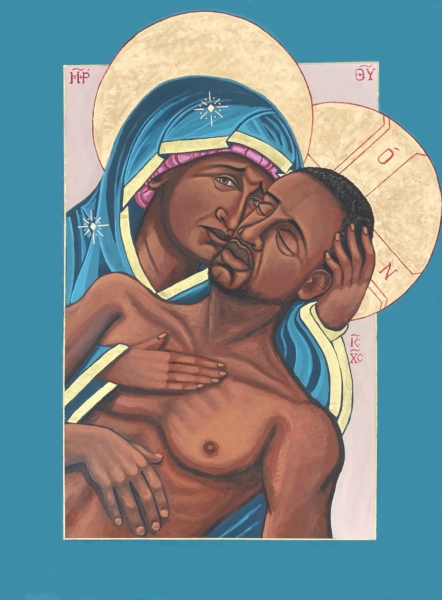 One of his most widely shared images – “La Sagrada Familia” – shows the Flight into Egypt with the Holy Family depicted as Latin American migrants. Painted the day after the 2016 presidential election, the icon went viral on social media and ended up serving as the cover art for a collection of Pope Francis’ writings on welcoming migrants and refugees. That icon and others like it have drawn both praise and criticism, but above all, they have showcased the power of visual art to spark dialogue and draw connections between the ancient and contemporary. 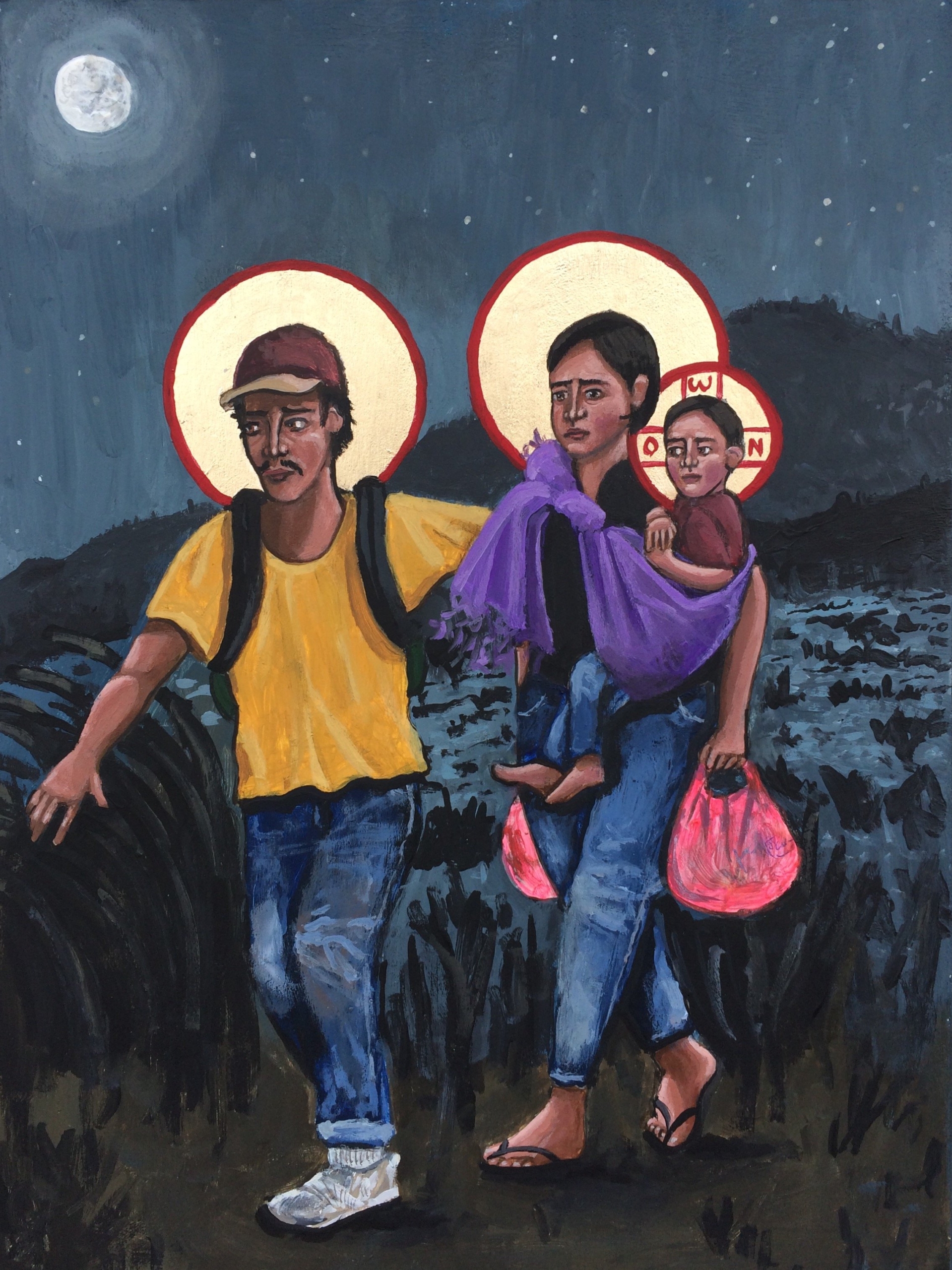 At 6 p.m. Eastern time on June 23, Latimore will participate with Presiding Bishop Michael Curry in a free webinar for Episcopal Migration Ministries, organized by The Episcopal Church’s Office of Development. The discussion will focus on EMM’s past and present work and how visual art can expand people’s understanding of the Christian response to immigration. The discussion will also touch on ideas for a new icon that EMM is commissioning Latimore to paint.

Latimore, a 35-year-old Episcopalian from St. Louis, Missouri, spoke to Episcopal News Service about how his work intersects with his faith and some of the most pressing social issues of our time. The following interview has been edited and condensed for clarity and concision.

EPISCOPAL NEWS SERVICE: What’s your faith background, and how did you come to The Episcopal Church?

LATIMORE: My dad’s an evangelical preacher; I grew up in a very evangelical tradition near Chicago. I ended up going to university in Greenville, Illinois, and I got introduced to the Book of Common Prayer through a small church there while I was studying religion and art. After that, I went to work with the homeless poor in Ohio, and through that, I ended up meeting a couple who had started a farm called the Good Earth Farm – a food pantry farm. They also were right in the middle of starting a community which ended up being called the Common Friars, and it was for men and women, lay and ordained, from all walks of life. I ended up working and then joining that community, which had close ties with an Episcopal parish. That was my first entrance into The Episcopal Church, and I got confirmed in my late 20s. We would have a weekly Eucharist and share a meal afterwards. But doing the work of farming and growing food for people brought me back down to earth. It felt like going home – conversations about spirituality would happen over a bed of carrots. 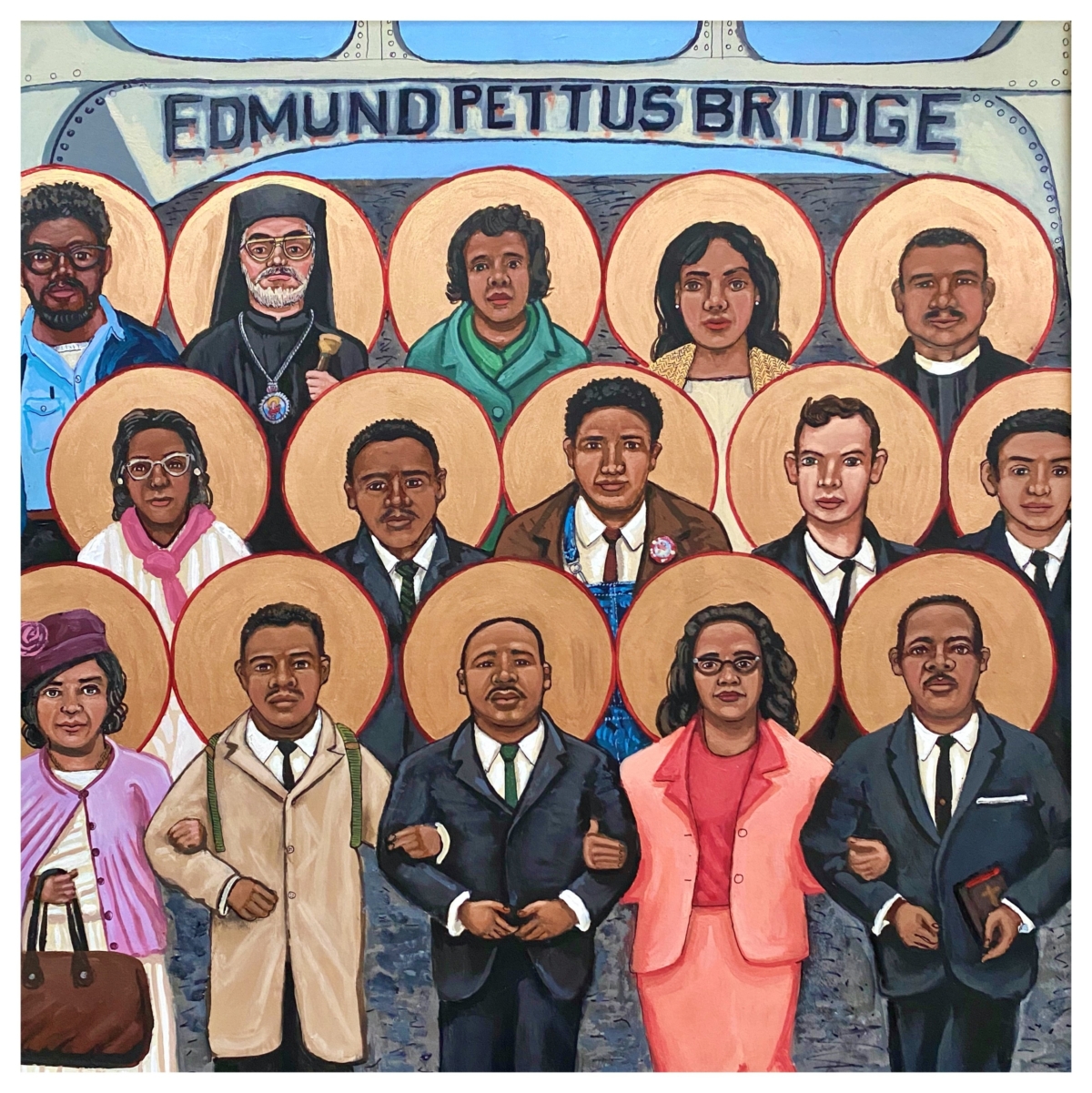 “The Saints of Selma” by Kelly Latimore. Courtesy image

ENS: How did you get started making icons?

LATIMORE: I had always done art – went to school for art. A priest living with us asked me if I’d ever tried painting an icon and I hadn’t, so I just dived headfirst into books and went to visit a few churches that had icons and did what all artists do. I just started tracing the old icons and learning the form and the colors and their meaning. After a while I was interested in trying my first original icon, and it was based on our common experience on the farm, thinking about how we can be like, in Jesus’ words, the lilies of the field. So that became the focus of my first icon. The community really embraced it because it was a part of our common experience, which is really meaningful to me, but that also showed me how sacred art can be a placeholder for thought and prayer but, most importantly, our action and the way that we’re in the world together.

ENS: How do you approach the balance between traditional iconography and your own style?

LATIMORE: What I hope that my work can do is take all these metaphors and symbols that have been around for a long time and just carry them into the present. Some of the older icons, as beautiful as they are, maybe are not going to be as approachable because of their own context. 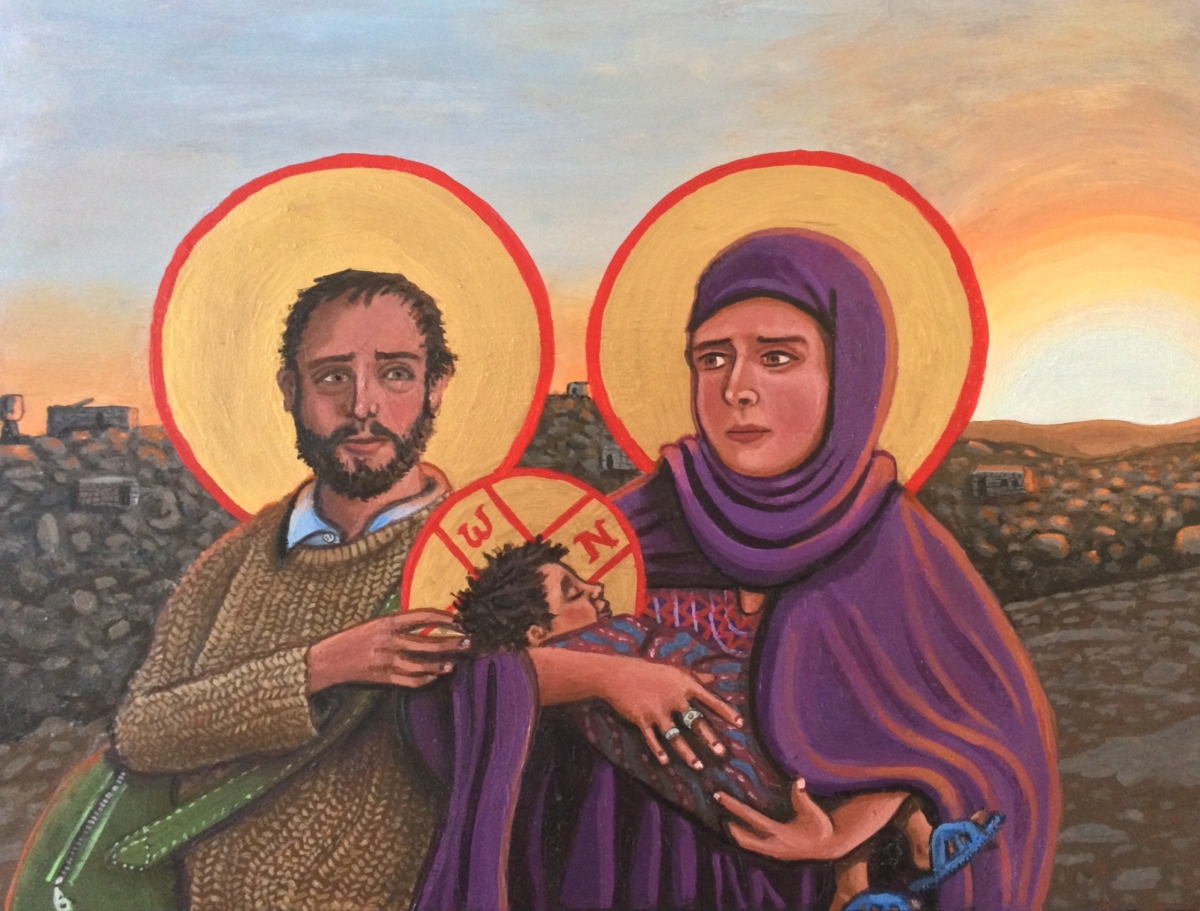 In our age of endless images, with social media and advertisements, we’re constantly being inundated with this stuff. What icons can do is say, this is what we’re choosing to see as a community. These different images – images of the Trinity being seen as three women of color, or Christ being seen in a different representation that is more true to him being a man of color – they can teach us how to see the world in a new way. Hopefully, the work that I can do is seeing the saints that are among us, and the images of God that are in plain sight, here and now.

ENS: What moved you to start depicting migrants and refugees in your icons?

LATIMORE: My partner and I met a young undocumented man from Guatemala around the bonfire one night and heard his story of why he had come to the United States, his hopes and fears and dreams and what he saw on his way. It was profound, and it broke us too. In the era before the 2016 election, you could just kind of tell what was coming, that the country – and unfortunately a lot of Christians – was becoming very anti-immigrant and anti-stranger. 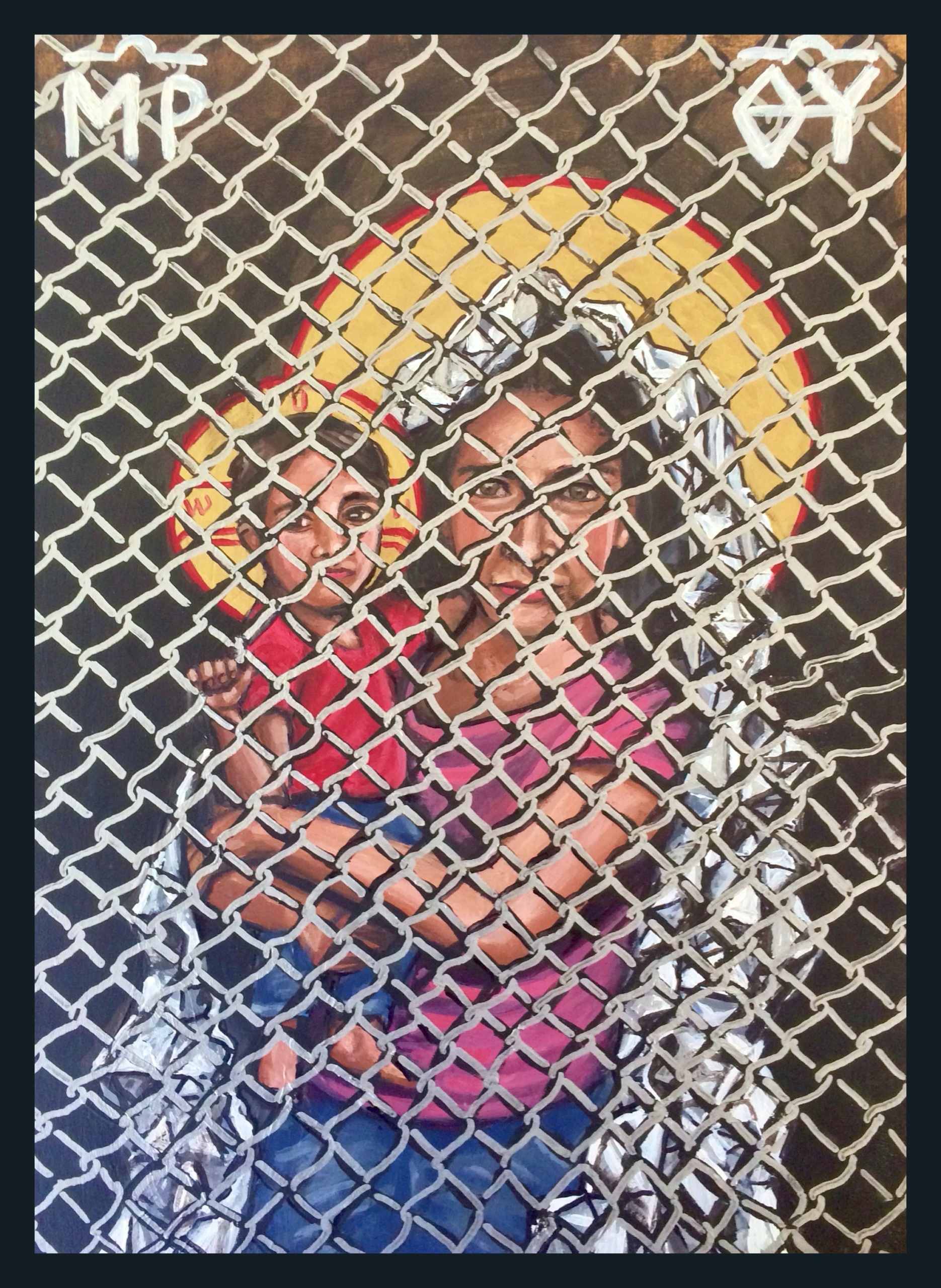 “Mother of God: Protectress of the Oppressed” by Kelly Latimore. Courtesy image

I was thinking about this young man that we met, and how he was vilified. All these “issues” in our country are not issues. They’re people with names and faces and stories. His experience immediately made us think of the Holy Family fleeing as refugees. Most of these people that come into the southern border are possibly having the same feelings and emotions that Jesus, Mary and Joseph were having 2,000 years ago. So it’s trying to use the metaphors I had in the church to create a dialogue about it.

ENS: What kind of emotional and spiritual state are you in when you’re painting?

LATIMORE: So much of art can be really serious, and I just don’t approach it that way. I really love improvisation and the idea of play. The iconography tradition has a very beautiful spiritual component to it – prayerful meditation as you’re doing the work, and I connect to that. Certain images that I’ve painted, like “Mama” – I was in that state the entire time. Prayer can be an action.

ENS: What do you hope people experience when they look at your icons?

LATIMORE: We’re always struggling with the image of God. Maybe by seeing God represented in a different way or in a different form or metaphor, it can break up our own images that we’ve built up and confront us to the otherness that is around us or in ourselves. Putting different images before us can teach us how to see, and then maybe engage each other and understand and wrestle with this kind of holy pondering. Art isn’t necessarily for worship and devotion, but maybe even for dialogue within our churches.

Register here for “The Work of Your Church: An Evening in Support of Episcopal Migration Ministries with Presiding Bishop Michael Curry and Iconographer Mr. Kelly Latimore” at 6:00 p.m. Eastern on June 23.