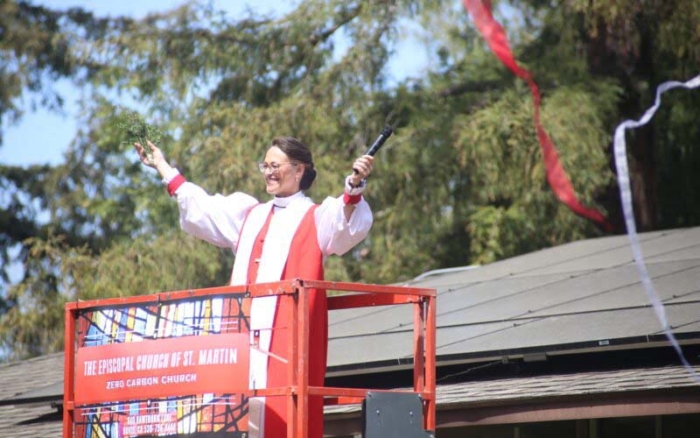 [Episcopal News Service] When it came time to bless the solar panels at the Church of St. Martin in Davis, California, earlier this spring, Northern California Bishop Megan Traquair had to improvise – the Book of Common Prayer, so far, doesn’t include a solar panel blessing.

After reading an abridged version of “A Song of Creation” from the Morning Prayer II lessons, Traquair stood on a scissor lift, sprinkled the panels with holy water, and prayed “that they may continue to capture the light of God’s beautiful creation, the thumb that he placed above us, and that its energy may go to help support the life of those that he has placed here in this community, in this country and in this world.”

Episcopalians and other people of faith have increasingly become aware of climate change and its effects, particularly in places like California where wildfires burn millions of acres annually and force residents to evacuate.

“There’s a justice aspect to our care for creation, making sure the benefits of our creation care are available to all. Some people grow food in their own gardens to take to the food bank to care for the poor,” Traquair told Episcopal News Service. “All of these are ways to care for creation and to love our neighbor.”

St. Martin’s began efforts to eliminate excess waste and protect the environment back in 2002, said Nick Buxton, a vestry member and primary coordinator for the solar project. The church began by replacing worn-out items with eco-friendly alternatives, and in 2018, the congregation decided to be more proactive and began converting utilities that had previously been powered by other sources, such as gas stoves or furnaces, to electric. By making sure everything was powered by electricity — which is sourced from solar energy — St. Martin’s was able to become a zero-carbon campus, meaning it doesn’t give off any carbon emissions.

“By doing it on the church property, you’re modeling what can be done,” Buxton said. “We know the climate crisis is one of the biggest environmental crises humanity has faced and is going to require action at every level, and the church can speak with an even stronger moral voice if it puts into action.”

Nationwide, churches’ interest in converting to solar energy has increased over the past several years, Susan Stephenson, executive director of Interfaith Power & Light, told ENS. The organization, of which St. Martin’s is a member, was founded in 1998 at Grace Cathedral in San Francisco, California, as a coalition of Episcopal churches aggregated to purchase renewable energy. Over the years, it has expanded nationwide and now includes other faith partners. St. Peter’s Episcopal Church in Weston, Massachusetts, is one church joining the interfaith movement on the East Coast.

On June 15, faith leaders from across the U.S., including Episcopalian Susan Stephenson, called on Congress to act on climate, justice and jobs.

“Over decades, religious leaders have been recognizing the threat to our environment posed by climate change, the moral cause that it is and the spiritual elements of this relationship that we have with our environment,” Stephenson said. “I think it’s a wonderful thing to see it building and manifesting itself in churches going solar.”

She noted the growing effort among dioceses to pool resources together, recalling California Bishop Marc Andrus’ challenge to all California dioceses to transition to solar energy.

The Rev. Colin Mathewson, co-vicar of St. Luke’s Church in the North Park neighborhood of San Diego, California, with his wife, the Rev. Laurel Mathewson, described solar energy as a “unicorn” because it can be promoted from multiple perspectives. From a “conservative, financial risk management perspective,” solar energy saves money; from a scientific perspective, “it is wonderful for the environment”; and, from a Christian perspective, it’s “a wonderful way to express and honor God. It’s our own form of praise and worship to care for the earth in this way.”

Panel installation at St. Luke’s was completed at the end of last year. The panels’ visibility provide a “clear expression of our values,” he said. God’s plan for salvation takes place through the created material world, he added, noting that the “heavenly Jerusalem” referred to in the Book of Revelation will be on Earth.

“To me it’s pretty straightforward Christianity,” Matthewson said. “People have different political views around how one cares for the world — and many of those are reasonable and important debates — but that we should care for and steward the world I hope isn’t really up for debate, at least not for churches and theologies that take seriously the Incarnation.”

St. Luke’s was able to convert to solar energy thanks to a partnership initiated by the Diocese of San Diego. In 2018, churches asked the diocesan property committee about implementing solar energy, said Erika Morgan, the diocese’s clean energy consultant and a member of St. Paul’s Cathedral, also in San Diego.

Individual churches may not be able to afford solar panels, but by entering into a diocesan collective power purchase agreement, or PPA, parishes can afford them, she said.

“The bigger companies don’t consider churches to be credit-worthy places. The faith community has had a very difficult time receiving the attention of the solar industry,” said Morgan, who also serves on the cathedral’s solar team. “By coming together and doing it at the diocesan level, we can just cut into that problem and bring resources to them in a way that works for them.”

Catherine Duffy, a postulant in the Diocese of Southern Ohio, noted that people who grew up learning about climate change, like she did, can now create change.

“We have all been talking about this since we were kids, and it’s just taken that much time to move our culture to the place where enough people want to act on it,” said Duffy, a board member for the Center for Religion and Environment at the University of the South in Sewanee, Tennessee, and Christian care convener for Province V.

“We’re not the Sierra Club. We are the church. We do what we do because we follow Jesus, and that’s something we need to keep repeating,” she added. “We’re not just called just to action; we’re called to formation.”

Through its “Solarize Ohio” initiative, the Diocese of Southern Ohio is working with 14 parishes to introduce solar energy to their campuses, said the Rev. Craig Foster, a deacon at Trinity Episcopal Church in Columbus and a member of the diocese’s Christian Care and Environmental Justice Task Force. While there is some resistance to transitioning to solar energy — particularly because coal mining is still a major industry in the region — most people are receptive, he said.

“Now is the time. People are ready. Five to seven years ago, we had this strange conversation about whether we believed in climate change or not,” said Foster. “We have these events like Hurricane Sandy. We have the event that Texas just experienced, which … most likely is related to climate change.”

The Rev. Steve Keplinger, rector of Grace St. Paul’s in Tucson, Arizona, has spent the last 10 years preaching the interconnectedness of humanity and the natural world during the “Season of Creation,” which has been added to the parish’s liturgical calendar. It begins on the Sunday nearest the Oct. 4 Feast of St. Francis of Assisi and goes through just before the First Sunday of Advent.

“The entire liturgy is based on prayers and liturgical pieces that all talk about how we’re connected to nature and what that relationship looks like,” Keplinger said, adding that he continues to use the Gospel from the lectionary.

Grace St. Paul’s installed solar panels five years ago through a PPA with Technicians for Sustainability. Without that partnership, the parish couldn’t have afforded to install the panels, Keplinger said. Other creation care measures implemented on the campus include using eco-friendly lightbulbs, maintaining a vegetable garden to support a food pantry and installing insulated windows. Currently, the solar panels are producing approximately 80% of the electricity the church uses.

“We don’t have any real financial advantage for using solar panels now, and we won’t for 15 years down the road,” said Keplinger. “We thought it was important to do whether we had the money or not.”

The Rev. Pam Hyde, the first canon for creation care in the Diocese of Arizona, is working to establish a collective PPA in the diocese.

“As I began talking to parishes around the diocese, a lot of them were asking me how do they switch to solar energy,” Hyde said. “The churches are understanding this is something we do because we have a responsibility to take care of God’s creation.”

The diocesan initiative — “Harvesting the Sun,” derived from St. Francis of Assisi’s “Canticle of Brother Sun” — invites parishes to reach out to the diocese’s creation care ministry for help in assessing their needs and the feasibility of installing solar panels, she said.

“They’re able to leverage investors by using federal solar investment tax credits. Because churches are nonprofit and don’t file taxes, we can’t take credit, but there are federal investment credits out there,” she said. “We believe we can completely eliminate any requirements to provide capital for this upfront. That means they can pay for the cost of this over time after the solar is actually installed.”

For its PPA, the Diocese of San Joaquin divided 12 sites into two phases. As previously reported in Episcopal News Service, the diocese started the process in 2019. Despite the COVID-19 pandemic, the first six sites just finished installing their panels, putting the diocese at more than 50% of cost-saving on renewable energy, solar consultant Cal Harling said. Once Phase 2 has been completed, diocesan officials hope to be at 90%.

The parishes have been “extremely positive about this and excited about the idea they’re going to get solar,” Harling said. “They constantly bug me about when projects are going to start. There’s a lot of enthusiasm.”

Caring for creation is a part of our baptismal call, said San Joaquin Bishop David Rice, noting that the baptismal covenant in the Book of Common Prayer asks candidates to be aware of and serve their neighbors and to strive for justice for all people. Rice said he plans to visit each site and bless the new solar panels, as his counterpart in Northern California did.

“For the last year amid COVID, I’ve been talking about simultaneous pandemics — the virus, racial and ecological crises — and these pandemics require everyone to respond to this,” the bishop said.

The climate crisis affects people on the margins, many of whom are people of color, he added, noting that healthy food is more expensive and less accessible for the economically disadvantaged, and many don’t have access to clean air or water.

“It’s all connected. Whether we are using up or conserving, it’s all related to the resources we’ve been gifted,” Rice said. “And how we are giving care to all the aforementioned is what our faith is about.”

– Tony Gutiérrez is a freelance journalist based in Cave Creek, Arizona.