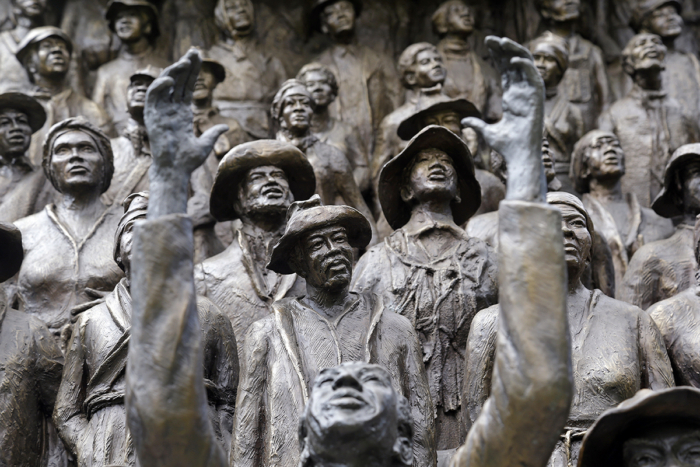 Bronze figures look out from the Texas African American History Memorial on the grounds of the Texas Capitol in Austin, Texas. The monument, erected in 2016, traces the history of African Americans in Texas from the 1500s to the present. The central portion of the memorial, by sculptor Ed Dwight, depicts the original Juneteenth in Texas in 1865. Photo: Associated Press

[Episcopal News Service] Juneteenth is recognized by most states as a secular holiday and celebrated in many American communities on June 19. This year, the Diocese of California is taking its Juneteenth commemorations a step further with its inaugural feast day worship service for the holiday, which celebrates the emancipation of American slaves.

The diocese added Juneteenth to its calendar of feasts by a vote of its convention in October 2020. Since then, members of the regional chapter of the Union of Black Episcopalians, or UBE, have worked with the diocese’s Afro-Anglican Commission to develop a Juneteenth liturgy. It will be celebrated for the first time June 19 at Grace Cathedral in San Francisco and livestreamed on Facebook. The diocese also will propose adding the feast day to the churchwide calendar when the 80th General Convention meets next year.

Jeanette Dinwiddie-Moore, co-chair of the UBE chapter and a member of St. Paul’s Episcopal Church in Oakland, was a leading proponent of the resolution that created the diocesan feast day because she thinks it is important to deepen awareness of the history of slavery. Juneteenth is sometimes called the country’s second Independence Day, Dinwiddie-Moore noted, and stories of emancipation are still relevant to the challenges that people of color face in the 21st century.

“It’s also a fact that oppression and slavery in different forms still exist in the world today, and even in the United States,” she told Episcopal News Service. 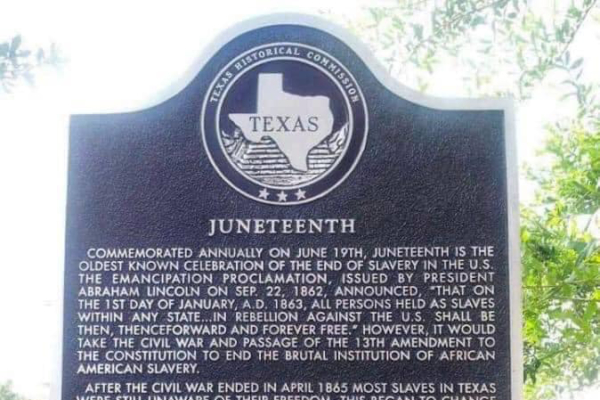 Juneteenth traces its origins to Galveston, Texas, in 1865, though nearly every state now marks June 19 with a Juneteenth holiday or observance.

June 19 marks the anniversary of the day in 1865 when Union Maj. Gen. Gordon Granger and his troops arrived in Galveston, Texas, and announced to slaves there that they had been freed. The Emancipation Proclamation issued by President Abraham Lincoln had taken effect on Jan. 1, 1863, but the order had little effect in the parts of the South still controlled by the Confederacy during the Civil War. And even though the war ended in April 1865, former slaves in Texas didn’t receive news that they were free until two months later.

Celebrations of Juneteenth took on greater resonance last year, when the holiday occurred less than a month after the killing by police of George Floyd in Minneapolis, Minnesota. Cellphone video of the murder of a Black man by a white officer inspired protests against racial injustice across the country and drew attention to the historical roots of racial oppression in the United States.

Episcopalians joined in celebrating the holiday last year while highlighting the church’s continuing efforts at racial reconciliation. More events are planned for this year:

“It’s an important holiday,” the Rev. Mauricio Wilson told ENS. He is rector of St. Paul’s in Oakland and chair of the Diocese of California’s Afro-Anglican Commission. “Things didn’t just magically change on June 19 of that year when the news got to the then-enslaved people in Texas, but when you look back in history, it marks an important date for all of us.”

Wilson was part of the group that developed the diocese’s Juneteenth liturgy, which includes prayers, hymns and suggested readings from Scripture for the day. The group chose Amos 5:18-24, Galatians 3:23-29 and Luke 4:14-21, along with Psalm 137.

California Bishop Marc Andrus, in a written message to ENS, thanked Wilson, Dinwiddie-Moore and other local Episcopal leaders for proposing the feast day and developing the liturgy for its celebration.

“Holding the first of our annual observances in Grace Cathedral locates the Juneteenth celebration in a central sacred space of our wider church,” Andrus said, “a place where the birth of the United Nations in San Francisco is memorialized, a place where the compassionate response to the AIDS crisis is also remembered. Juneteenth now takes its place with these great events.”

Nearly every state has proclaimed Juneteenth as a holiday or observance. In the past year, some also have made it a paid holiday for state employees, from New York to Washington. Martin Luther King Jr. Day was the last holiday added to the federal calendar, in 1983, and some U.S. lawmakers are stepping up their efforts to make Juneteenth a federal holiday as well.

An increasing number of employers are giving their workers the day off and, for the first time, that includes the Domestic and Foreign Missionary Society, the church’s corporate entity. Because June 19 falls on a Saturday, churchwide employees will receive June 18 off in observance of Juneteenth.

“Juneteenth is fundamental to our desire to be a Beloved Community,” the Rev. Geoffrey Smith, the church’s chief operations officer, said in a written statement for this story. “Proclaiming the dream of emancipation may have happened in 1863, but for those still enslaved it was an interminable wait until June 19, 1865, before it truly became reality. As we are learning the truth about racial reconciliation, we go through a process of practicing the way of love that needs to involve change.”

The Diocese of California’s Juneteenth liturgy could become a model for other dioceses – and for a possible Episcopal Church feast day.

“Over the years, I have heard many explanations for why it took from January 1 of 1863 to June 19 of 1865 for news of the Emancipation Proclamation to make it to Texas. The more I thought about it, the more I realized that so many had a vested interest in covering up that the news, especially throughout the Confederacy. In spite of that, the news got there anyway. Slaves heard the word Freedom applied to them with ‘All slaves in the rebellious states shall be henceforth, and forever, free.’ Even though the Emancipation Proclamation didn’t have the force of law, it was a sword of the Spirit. Slaves through the Confederacy escaped and joined the Union Army,” Curry told ENS in a statement.

“And though it would be years in coming, that dawning realization that freedom was for them was the beginning of the freedom movement from within that would eventually break the chains without.

“Today, the observance of Juneteenth might be a subtle awakening to the truth that even painful truths, once told, do not further enslave us to the past; rather, if we learn from them, they set us free to live a new present and a new future. And that is true for the descendants of former slaves and the descendants of former slave owners,” he said.

The Episcopal Church’s calendar of feast days includes just two secular U.S. holidays: Independence Day and Thanksgiving. No feast days are yet on the official calendar for June 19, though 20th-century educator Adelaide Teague Case would be added to that date under a plan for expanding the calendar that received first approval by General Convention in 2018.

The Standing Commission on Liturgy and Music, or SCLM, in its report for the 80th General Convention, outlined guidelines for proposing new feasts for the churchwide calendar and the publication known as “Lesser Feasts and Fasts.” It emphasized first developing liturgies and celebrations locally before proposing them for wider use.

The Diocese of California is following that process with the Juneteenth resolution approved at its diocesan convention. In addition to calling for California to establish Juneteenth as a paid holiday for state employees, the diocese pledged to “work toward the inclusion of the Juneteenth Feast Day in ‘Lesser Feasts and Fasts.’”

Wilson will be an alternate deputy representing California at the 80th General Convention in July 2022 in Baltimore, Maryland. He told ENS that diocesan celebrations will bolster the case for adding Juneteenth as a churchwide feast.

“We’re trying to put it in place here, show that it can be done,” he said, and the diocese is happy to share its liturgy with others across the church who are interested in doing the same.

Dinwiddie-Moore, the UBE chapter co-chair, is looking forward to participating in the inaugural Juneteenth service at Grace Cathedral, the culmination of nearly a year’s worth of work by her and other proponents of the feast.

“I’ve spent a lot of hours on this,” she said. “I’m very happy it’s where it is today. It’s really a blessing.”