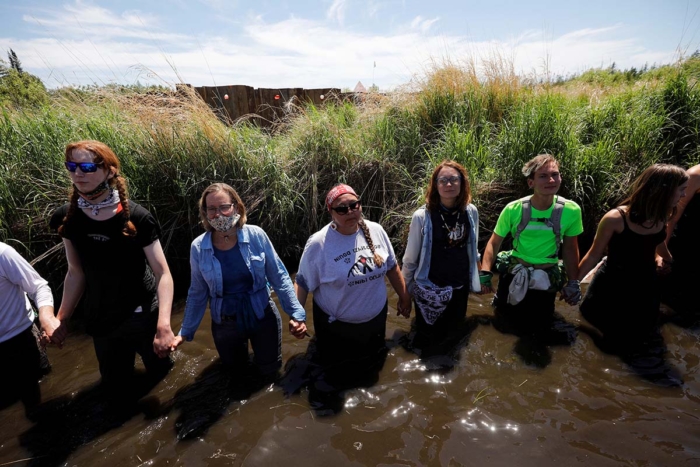 Indigenous leaders and activists participate in a prayer on June 7 at the Mississippi headwaters on the third day of the Treaty People Gathering, an organized protest of the Line 3 pipeline, built by Enbridge Energy, in Solway, Minnesota. Photo: Nicholas Pfosi/REUTERS

[Episcopal News Service] Earlier this week, thousands of people, including Episcopalians from as far as Oregon and Washington, D.C., answered an invitation from Anishinaabe women and traveled to the headwaters of the Mississippi River – Bear Creek, as the Anishinaabe call it – to join them in a nonviolent protest to stop construction on an oil pipeline crossing treaty land in northern Minnesota where the tribe hunts, fishes and gathers wild rice.

“From the Anishinaabe side, their interpretation is that the land is given by God; it is holy land, it’s sacred land. As co-tenants of that land, they are responsible for anything and everything that happens there; it’s not theirs to own, it’s theirs to care for,” the Rev. Matthew Cobb told Episcopal News Service on June 9. Cobb is a priest in the Episcopal Church in Minnesota and serves four congregations in the northern third of the state: two on the Leech Lake Reservation, one on the Red Lake Nation and one in Bemidji.

“That’s why we’re here at the Mississippi. It’s to protect the water because the water is alive and it’s got a soul; it’s got a consciousness; it’s there, it’s a being to be related to, be cared for,” said Cobb, acknowledging that he, a white man, serves but cannot fully speak for the Indigenous people he stands alongside. “It’s really important for us as nonnatives to listen when the invitation is there to come to the sacred land or come to the sacred waters that they’re protecting.”

Wild rice has for thousands of years sustained the Anishinaabe, which is why the women have invited other water protectors to join them in their opposition to Line 3, which originates in Canada’s northern Alberta tar sands and carries low-grade crude oil diluted with carcinogenic chemicals to Superior, Wisconsin.

The Minnesota Court of Appeals heard arguments in March challenging the state’s Public Utilities Commission’s approval of a $9.3 billion, 338-mile pipeline replacement and expansion project across northern Minnesota. Enbridge began construction in December 2020 and is halfway finished. The court’s ruling is expected as early as next week. Line 3 is one of six Enbridge pipelines crossing northern Minnesota and is the largest in the company’s history.

Cobb spoke to ENS from Camp Fire Light, so named earlier this week on the fourth day of a traditional ceremony held on Turtle Island, land the Ojibwe ceded by treaty to the U.S. government in 1855. On June 7, the Anishinaabe and their allies set up tents on untreated railroad ties on wetlands at “Gichi-ziibi,” the Mississippi River’s headwaters that cover over 2,500 miles of inland waterway. “We’re battening down the hatches, putting nails in tents and fortifying the place,” said Cobb, who has used discretionary funds from St. Bartholomew’s in Bemidji to assist the effort.

People of faith for treaty rights! We are here because we are ALL treaty people and we have a moral responsibility to defend the treaties.@POTUS, it is time to stop this pipeline.#TreatyPeopleGathering #Faiths4Climate #StopLine3 pic.twitter.com/In6aGWNkKo

At least 2,000 people answered the Anishinaabe’s call and attended the Treaty People Gathering, which was supported by organizations like Minnesota Interfaith Power & Light, MN350 and GreenFaith, “all with the intention of supporting the leadership of Anishinaabe, from leaders and elders who had put out the invitation for people to come here,” Phoebe Chatfield, The Episcopal Church’s program associate for creation care and justice, told ENS. She joined a 300-member interfaith delegation organized by Interfaith Power & Light, which with others is calling for the Biden administration to stop construction on the pipeline.

In January, President Joe Biden, in an executive order aimed at protecting the environment and addressing the climate crisis, revoked an international permit that allowed Canada’s Keystone XL pipeline to cross the U.S.-Canadian border. This week, the Keystone XL pipeline operators terminated the project.

It’s “baffling” and “lacks foresight,” Buff Grace, an Episcopalian and Minnesota Interfaith Power & Light’s solar coordinator, said of the Line 3 project. “[The Public Utilities Commission] is allowing this company to put in pipelines, to keep going with this old way of doing things with fossil fuels that we know is tragic and has no future and is only going to drive us further into catastrophe.”

At a time when attention is on drought and wildfires and when access to clean drinking water is limited throughout the world, including in the western United States, the movement against Line 3 is the latest Indigenous-led environmental protection action. Protecting water resources is particularly fitting in Minnesota, which has more than 10,000 lakes and a fifth of the world’s freshwater. (The Minnesota Department of Natural Resources has given Enbridge permission to use 4.5 billion gallons of groundwater annually.)

“As people of faith who belong to a church that has refuted the Doctrine of Discovery, this is an opportunity for us to live into that repudiation, to say … that we no longer treat Indigenous people in some kind of inferior way, but we honor the treaties that we’ve written with Indigenous people and live up to them, which means we have to follow those treaties, which are not being followed if this pipeline is built,” Grace told ENS.

The Episcopal Church’s solidarity with the Anishinaabe is fixed in a 2018 General Convention resolution reaffirming the church’s repudiation of the Doctrine of Discovery and support for Indigenous peoples’ sovereignty over territorial resources. The resolution specifically noted the concerns of the Leech Lake Band of Ojibwe in regard to the Line 3 pipeline. When the Anishinaabe ceded the territory to the U.S. government in 1855, they did so with the understanding that they would maintain their rights to hunt, fish and gather wild rice on the land.

“The Episcopal Church, like so many Christian churches, has been complicit historically in the decimation of Indigenous cultures and ways of life. And not only does Line 3 pose a significant threat to our environment and to water in Minnesota and elsewhere, but it violates treaties with Indigenous peoples,” Minnesota Bishop Craig Loya told ENS. “The movement of resistance to Line 3 is being led primarily by Indigenous leaders, and that was certainly true of the events over this past weekend. Part of what we are called to do, as an act of solidarity and repentance for our past complicity, is to stand in solidarity with the Indigenous leaders and do what we can to advocate for the federal government honoring the treaties that we have with Indigenous communities.”

Shortly before the Treaty People Gathering began, the Biden administration on June 1 announced the suspension of oil and gas leases in Alaska’s Arctic National Wildlife Refuge. It was the latest development in a long-fought political battle over whether to develop or conserve the 19.6-million-acre oil-rich coastal plain considered sacred by Alaska’s Indigenous Gwich’in, many of whom are Episcopalians.

The Episcopal Church stood in solidarity with the Standing Rock Sioux Nation in its claims of tribal sovereignty and desire to protect its drinking water and culturally important lands in its fight against the Dakota Access Pipeline, which remains operational.

“I think what is happening with the Dakota Access Pipeline and the Enbridge 3 pipeline and Indigenous communities can be historically traced back to the Doctrine of Discovery,” the Rev. Brad Hauff, The Episcopal Church’s missioner for Indigenous ministries who lives in Minnesota, told ENS. “That is the source of colonization. That is the source of white European domination and privilege. That is the source of environmental racism and the systemic racism that has assaulted the Indigenous people of the Western Hemisphere since the 15th century. And it came out of the church. The Episcopal Church repudiated the Doctrine of Discovery, but that is only the beginning of a response. We must strengthen our partnerships with Indigenous communities and stand with them when they are subjected to environmental racism and injustice.”

Our very own @Rev_Melanie leads all those gathered in a climate and creation justice Prayers of the People in the Episcopal tradition! #Faith4Climate #CreationCare #EcoJustice https://t.co/el9Ia4c0kV

At the same time that some Episcopalians are standing alongside interfaith partners in solidarity with the Anishinaabe, others are calling on the Biden administration to transition the United States away from fossil fuels to clean energy in an effort to stop climate change. The Rev. Melanie Mullen, The Episcopal Church’s director of reconciliation, justice and creation care, joined 100 faith leaders near the Capitol in Washington for a June 9 event co-sponsored by Interfaith Power & Light in support of Biden’s call for 100% clean electricity by 2035 as part of the American Jobs Plan.

Referencing resolutions that repudiate the Doctrine of Discovery and uphold the rights of Indigenous people and that address climate change, Mullen called attention to one particular Executive Council resolution passed in 2019 endorsing and commending the church’s creation care covenant.

“The resolution lays out in a pretty sophisticated way how we as a church understand that fossil fuel use not only impacts climate change but also victimizes those who are least capable of withstanding ecological devastation,” she told ENS. This, she said, is in line with Presiding Bishop Michael Curry’s vision of the Jesus Movement. “We do not leave the least equipped behind. Just as we are committed to using the Carbon Tracker – Episcopalians have a pretty sophisticated understanding of ourselves as an institution, not just our individual use, but our corporate solidarity and responsibility.

“This work with [Interfaith Power & Light] today and the emerging victory in the Alaska wilderness areas and the solidarity working going on in Minnesota around the pipeline is all about peace,” Mullen said. “We are not trying to be just in solidarity with Indigenous communities, we are trying to be co-conspirators in a vision of healing and hope for God’s Earth and all of God’s people.”