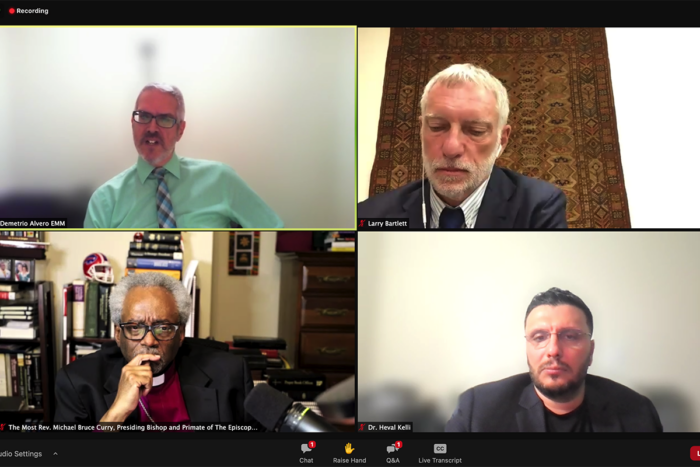 Refugee resettlement was reduced to the lowest level in the federal program’s 40-year history under President Donald Trump, but with President Joe Biden taking office in January, his administration pledged to work with EMM and other resettlement agencies to restore a spirit of welcome to refugees fleeing war and persecution in their home countries.

“Refugees have made positive political, social and economic contributions to the United States throughout our history,” said Larry Bartlett, director of the Office of Refugee Admissions in the State Department’s Bureau of Population, Refugees, and Migration. Welcoming refugees “is who we are as a country. This is frankly how we came about. We’re a country of immigrants and refugees ourselves, and we shouldn’t forget that.”

Bartlett and Curry were joined on the webinar by EMM Director of Operations Demetrio Alvero and Dr. Heval Kelli, a Syria-born cardiologist who immigrated to the United States in 2001 with his family through the U.S. refugee resettlement program. EMM expects to post video of the webinar to its website next week.

Kelli described how his family established their new home in Atlanta, Georgia, with support from sponsoring members of All Saints’ Episcopal Church. It was the parishioners’ sense of humanity and their personal engagement with his family that he remembers most. A few months after his family settled in Atlanta, some of their sponsors invited the family to join them in seeing the movie “Lord of the Rings” – as many Americans were doing at the time.

“For three hours watching the movie, I really felt like a person again,” he said.

Global resettlement needs have only increased in recent years. The United Nations High Commissioner for Refugees estimates there are nearly 26 million such refugees worldwide, and tens of millions more have been displaced within their home countries. The president sets the ceiling, or maximum number, for refugees to be resettled in the United States each year. Trump slashed that number in his term to a historic low of 15,000 this fiscal year.

Biden has said he will increase it to 125,000 – which would be one of the highest annual limits since the program was created in 1980 under President Jimmy Carter. On May 3, his administration raised the cap for the rest of this fiscal year to 62,500 and plans to increase it further in the next fiscal year, which starts Oct. 1.

“The United States is rebuilding its refugee resettlement program, to restore this beacon of hope for those fleeing persecution,” Bartlett said during the EMM webinar. “We recognize that the last four years presented great challenges, and I can assure you that we are committed to working with our resettlement partners to address their needs as we rebuild our refugee admissions program.”

EMM is one of nine agencies with contracts to facilitate resettlement on behalf of the State Department. The number of local affiliates that EMM works with dwindled from 31 to 12 under Trump. Refugee resettlement operations in the U.S. aren’t expected to return quickly to previous levels, but Alvero said EMM is working with affiliates, congregations and interfaith partners to begin accommodating more of the refugees awaiting resettlement.

“We’re now in the process of building back the program, and we hope to build it back stronger and better,” Alvero said.

The Episcopal Church first began assisting refugees in the 1930s and 1940s through the Presiding Bishop’s Fund for World Relief, supporting people from Europe fleeing the Nazis. Since the Unites States created the current refugee resettlement program in 1980, EMM has resettled about 100,000 refugees, providing a range of services for these families upon their arrival in the United States, including English language and cultural orientation classes, employment services, school enrollment and initial assistance with housing and transportation.

Now, with World Refugee Day to be celebrated on June 20, EMM has scheduled a virtual prayer vigil that evening to offer solidarity and support for refugees worldwide.

Curry affirmed that solidarity and support during the webinar and thanked EMM for its work on behalf of The Episcopal Church.

“You all are remarkable. You have been faithful in hard times and in good times,” Curry said. He invoked references to God’s command to welcome the stranger in Scripture across faith traditions. “The truth is, welcoming the stranger, whether refugee, asylum-seeker or immigrant … is something we can all do.”