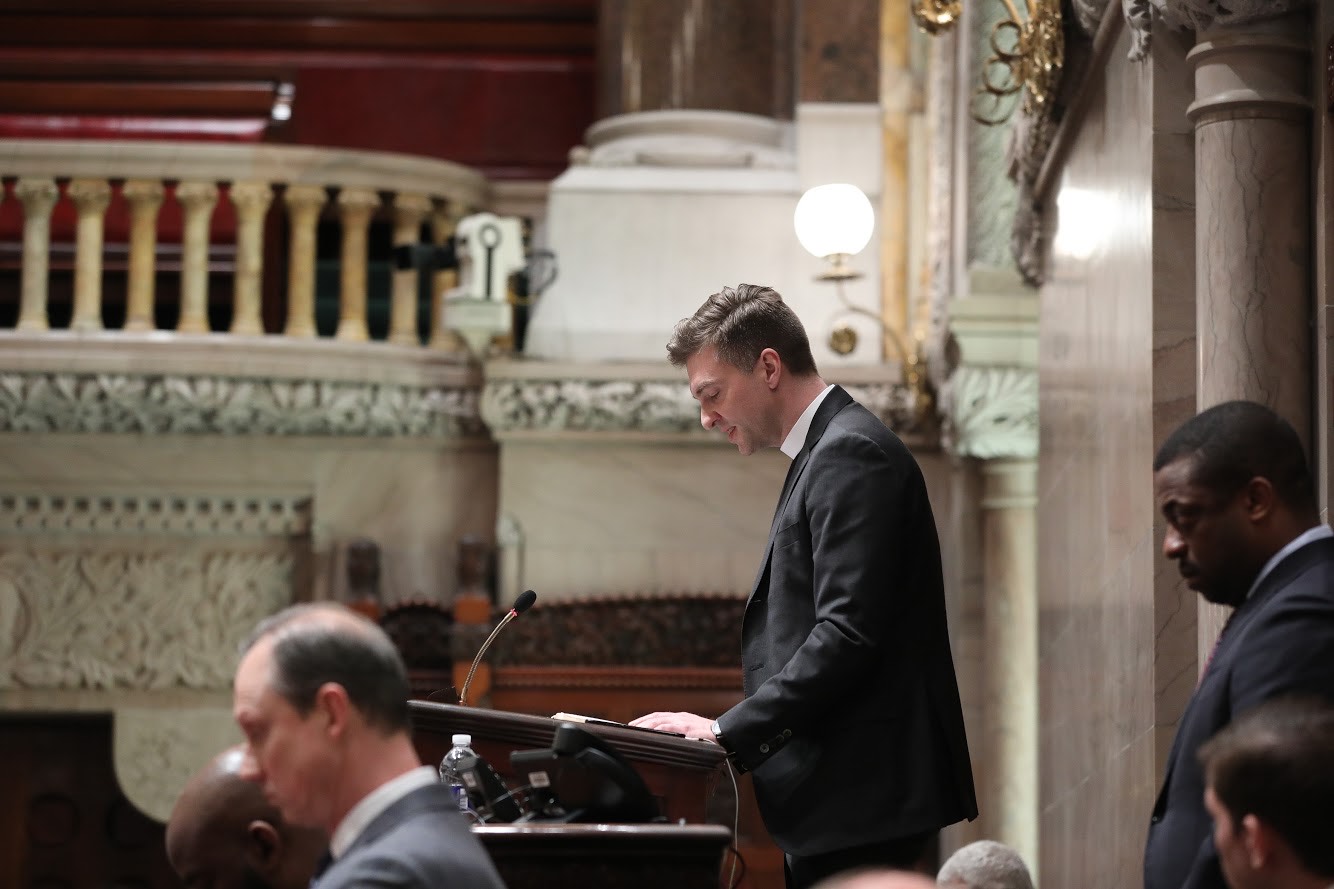 The Rev. Steven Paulikas gives the invocation at the opening of the New York Senate session on Feb. 24, 2020, reading the Collect for Prisons and Correctional Institutions in the Book of Common Prayer. Photo: New York Senate

[Episcopal News Service] The Rev. Steven Paulikas, rector of All Saints’ Episcopal Church in Brooklyn, New York, was already involved with criminal justice reform efforts before one of his parishioners was sent to prison. Maintaining his pastoral relationship with the man, Paulikas saw firsthand the harsh realities of New York state’s prison system. But COVID-19 – and the state’s failure to prevent its spread in prisons – turned the man’s 2-year sentence into a death sentence. He died of the virus at age 68, about a month and a half into the pandemic, after telling Paulikas he was scared that prison staff were bringing the virus into the facility.

Disturbed by the state’s apparent disregard for the lives of his parishioner and other inmates, Paulikas sought answers from government officials – and a sense of accountability for their failure. Getting none, he wrote an opinion essay published by The New York Times on May 31, which criticized the state’s treatment of prisoners. The essay has been praised by many advocates of prison reform, such as Piper Kerman, author of “Orange Is the New Black.” 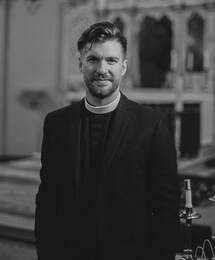 “When the state deprives people of their freedom, it also assumes responsibility for their safety,” Paulikas wrote. “I don’t want to live in a society that is comfortable locking away so many of its members, yet treats their lives with indifference. I can no longer stand a status quo in which someone like my parishioner loses his life for no good reason.”

Paulikas talked with Episcopal News Service about his parishioner’s life and death and why prison reform is a moral imperative for Christians. This interview has been condensed and edited for clarity and brevity. The parishioner was convicted of a sex crime involving a minor, so his name is not being used to protect the victim’s privacy.

Episcopal News Service: How long had you known him?

PAULIKAS: Since I came to the church; I’ve been here 10 years this week.

ENS: How did it impact the parish when he was convicted?

PAULIKAS: For reasons of pastoral sensitivity, and also because this person never wanted the parish to know where he was, I and the other people who knew what had happened did not share what happened to him. So he just kind of was no longer around. Most of all, I wanted to protect the privacy both of my parishioner and of the victim of his crime. Many people didn’t know even though he was incarcerated; people knew he had died because we made that announcement and we had a liturgy over Zoom shortly after he died, which was heartbreaking.

ENS: What was your experience with criminal justice reform before this?

PAULIKAS: I don’t consider myself an activist or an organizer. I got involved in criminal justice reform in New York state because of an extremely talented and influential rabbi in our community, Rabbi Rachel Timoner, who’s the head rabbi at Congregation Beth Elohim here in Park Slope. At the time, we were working on overturning cash bail in New York state, which is a horrible justice issue, and eventually legislation passed the New York Legislature in 2020 to eliminate cash bail. Gov. Cuomo used his executive powers later that year to overturn it, which was just this horrible thing. So that sort of activated me, and then learning more and more about the injustices in the criminal justice system made it very clear to me that the Gospel is just so clearly calling us to advocate for criminal justice reform.

ENS: Why is it important for Episcopalians to be involved in this work?

PAULIKAS: Sometimes Episcopalians can have a self-concept of being advocates from the side or the outside, but this actually happened to an Episcopalian. An Episcopalian died of COVID in prison. It’s our community, and it touches so many people’s lives – not just incarcerated Episcopalians but Episcopalians who work as correctional officers and law enforcement officers and public defenders and prosecutors. We all have our own ministries, many of which touch on the criminal justice system, and pretty much anyone who is thinking about it or looking at it understands that it’s a broken system, and that people are suffering. I am so grateful to fellow Episcopalians and Christians who are working to reform the system, and I know from what I’ve seen that it’s urgent and it’s necessary. There is such moral clarity about it. There are so many issues that the Gospel calls us to act on, but this one, criminal justice reform and reform of the prison system, is just so clearly something that God is calling us to work on. So many Episcopalians are working on it already. I have, through my own experience, understood how important it is, and I hope that more Episcopalians will join us in whatever way they can. 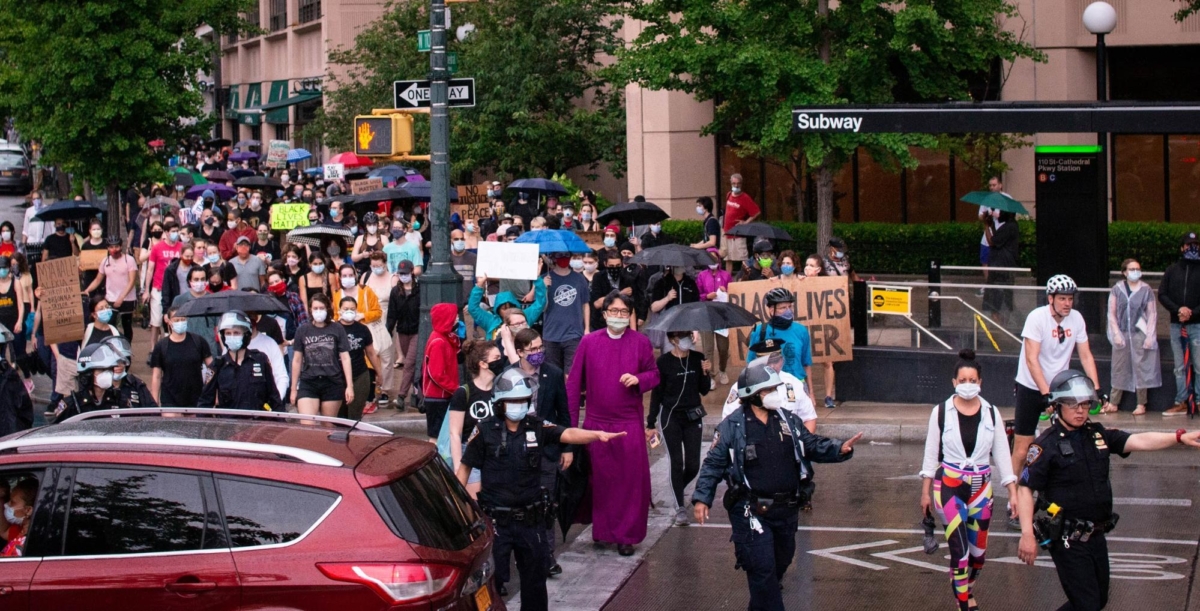 ENS: What prompted you to speak out so publicly about your parishioner’s death?

PAULIKAS: I wanted to tell the story of my parishioner because he couldn’t, and to show that this is something that is active and moving in our church. I will guarantee you that if Episcopalians led the way among all Christians in the United States, from mainline Protestants to evangelicals to Roman Catholics, and we all united on this issue, the system would change overnight. If we made our elected officials responsive to our moral calls, the system absolutely would change and people’s lives would change. Because right now, people’s lives are being destroyed, and it happens disproportionately to people who do not have economic resources and also to people of color.

I learned that he died in May of 2020. I officiated his funeral over Zoom, and I just kept thinking about it. And I watched as the governor was on television every day talking about what a great job the state was doing in fighting COVID, and I knew that my parishioner had died in prison. And there was this surreal moment that I mentioned in the piece, where the governor in a press conference talked about [state-issued] hand sanitizer. The labor was done by incarcerated people, and at the same time, hand sanitizer was not available in New York state prisons. So this sat with me like a lump in my stomach for months and months, and in February of this year, I felt called to tell this story. I just started contacting state officials and asking them – I wanted to find out what happened.

I hoped that it would put a human face on suffering that’s happening in prison. As Christians, we’re not called to solve all problems, but we are called to witness suffering and to confront the powers and principalities when we see people who are suffering. So I hope that in some measure, reading about this would have that effect of highlighting human suffering that was preventable. And of calling out those in power who were trying to cover it up.

ENS: You had some strong criticism for New York politicians in your essay, and criminal justice reform is ultimately a political issue. How would you respond to Episcopalians who think the church shouldn’t get involved in politics?

PAULIKAS: Episcopalians are elected officials on both sides of the aisle. They serve in Congress, they serve in state legislatures, they serve in governors’ offices. We’ve had many presidents who are Episcopalians. Episcopalians are having to make moral decisions all the time. And many of us are leaders in society. When we make decisions, we’re guided by Scripture and our faith and our baptismal covenant. So it’s impossible to separate our faith from our action in the public square. And, especially when we see something as concrete as unnecessary human suffering, we are called to use all of the organs of power, all the points of leverage that we have, to alleviate that suffering, and oftentimes that is engaging in the political process.

Now, in my story that I told, it just so happened that the antagonists – if you want to put it that way – are Democratic elected officials. So it’s not a partisan thing. As long as The Episcopal Church doesn’t become attached to a partisan agenda, and as long as we’re attached to moral issues, then we maintain our integrity. But we actually lose our integrity if we decide not to speak out or act about a given issue just because we’re afraid of “seeming political.” There’s no such thing. Not saying something about obvious human suffering is itself a political act.