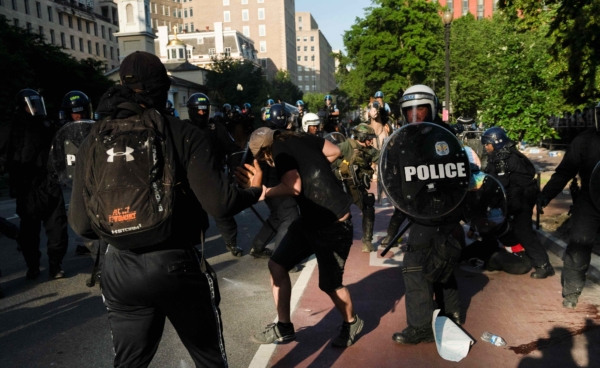 Police rush demonstrators as they clear Lafayette Square, across from the White House, during a protest against systemic racism and police brutality in Washington, D.C., on June 1, 2020. Photo: Ken Cedeno/Reuters

UPDATE: A federal judge ruled against protesters on June 22.

[Episcopal News Service] Last year, when then-President Donald Trump strolled from the White House to St. John’s Episcopal Church to pose for photos holding a Bible, the June 1 photo-op drew intense condemnation, not just for its use of Scripture as a prop – as Episcopal leaders emphasized – but also because protesters were forcibly removed from Lafayette Square immediately before the president walked through the park to the church.

A year later, Episcopal leaders again are speaking out about the incident, joining a groundswell of Christians objecting to a motion by the Biden administration’s Justice Department to drop protesters’ civil lawsuits against Trump and William Barr, his attorney general at the time of the melee. The lawyers for the Justice Department argued on June 4 that Trump and other officials are immune from lawsuits over law enforcement actions intended to protect him.

“I am deeply disappointed that the United States Department of Justice has asked a federal court to dismiss the actions brought against the government by protesters who suffered physical injuries and violations of their First Amendment rights,” Washington Bishop Mariann Budde said in a written statement issued June 7.

Budde responded a year ago when clergy and protesters were teargassed outside St. John’s, one of her diocese’s churches, and she has joined the grassroots Christian organization Faithful America in supporting protesters’ right to sue. More than 12,000 people have signed onto Faithful America’s online petition drive.

“Donald Trump and William Barr are out of office, but the evil white supremacy and violent Christian nationalism on display when they teargassed peaceful racial-justice protesters for a blasphemous Bible photo-op remain deep-seated forces in U.S. politics,” said the Rev. Nathan Empsall, an Episcopal priest who serves as executive director of Faithful America.

Last June 1, about 1,000 protesters had assembled outside the White House and in Lafayette Square across from St. John’s as part of the widespread demonstrations across the country against racial injustice in the days after the killing of George Floyd by police in Minneapolis, Minnesota.

That evening, Trump addressed reporters in the White House’s Rose Garden, declaring himself both “your president of law and order” and “an ally of all peaceful protesters.” Reports indicate the protest in Lafayette Square had been peaceful, and protesters were not yet in violation of the city’s 7 p.m. curfew.

Reportedly under Barr’s order, officers from the U.S. Park Police and other assisting law enforcement agencies, who were outfitted in riot gear, began pushing back the protesters. At least one Episcopal priest was among those who fled the scene when police began using smoke and what eyewitnesses said was some sort of tear gas on the crowd, as well as flash-bang grenades. At least 20 priests and a group of laypeople had been ministering to protesters throughout the day as “a peaceful presence” in support of the demonstrations.

With the square cleared, Secret Service agents and White House officials then escorted Trump to St. John’s, where he was handed a Bible and posed briefly for journalists while video footage showed him giving only a cursory glance at the boarded-up church. The visit lasted about 3 minutes. Trump called some of his aides, including Barr, to pose by his side before he left to return to the White House.

Presiding Bishop Michael Curry was among the religious leaders who spoke out against the federal actions. Trump “used a church building and the Holy Bible for partisan political purposes. This was done in a time of deep hurt and pain in our country, and his action did nothing to help us or to heal us,” Curry said at the time.

This week, Budde repeated her criticism of the incident in her statement about the lawsuits.

“The tear gas, flash grenades and other tactics employed that day injured innocent people and led to the forcible eviction of clergy and others gathered on the grounds of one of the churches of my diocese solely to allow the former President to use images of our church and its Holy Scriptures to convey a message antithetical to the church’s teaching,” Budde said. “The rule of law means little if those injured by these egregious actions are denied the opportunity to challenge their constitutionality fully and fairly. Even a president is not above the Constitution.”

Blocking the lawsuits would “authorize brutality with impunity,” lawyers for the American Civil Liberties Union, or ACLU, said in arguing against the Justice Department’s motion.