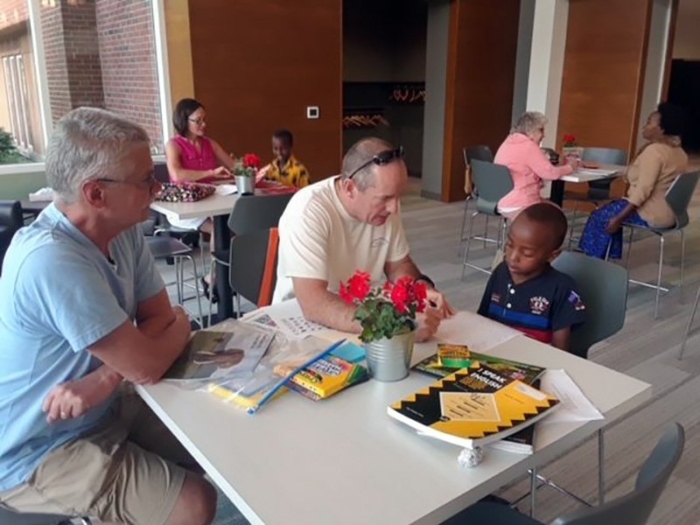 [Religion News Service] When the Sprunger family was matched with their foster daughter, an unaccompanied refugee child from Eritrea, they were told the 16-year-old could join them as soon as a couple of weeks, recalled Jessica Sprunger, 33, who lives near Traverse City, Michigan.

Friends and family collected winter coats for the girl and dropped off a stack of Christmas presents.

That was in October 2019, and the Sprungers — and their foster daughter — are still waiting to hear about a new date from Bethany Christian Services, which contracts with Lutheran and Catholic agencies, as well as the 37-denomination cooperative Church World Service, to resettle refugees. (The nine agencies with federal contracts to oversee resettlement efforts include Episcopal Migration Ministries.)

“Any time I speak with somebody from Bethany, I’m always asking, ‘What’s new? Anything going on?’ and there really has not been a whole lot of movement with her case yet. It sounds like the whole interview process has to have to happen again,” Sprunger said.

If Bethany has few answers, neither does nearly anyone along the chain, from local churches to national and local resettlement agencies to the United States Department of Health and Human Services in Washington, D.C. The organizations that do the work of refugee resettlement were hollowed out by four years of drastic cuts to the number of refugees allowed into the country by the Trump administration and the federal assistance that accompanied them.

The pandemic has also slowed the work of government officials who vet the refugees abroad.

“In a lot of ways, it looks like starting from scratch,” said Kristi Gleason, Bethany’s vice president of refugee and immigrant family services.

In 2017, Bethany served 342 refugees, including unaccompanied refugee minors. Two years later, it managed a surge of Congolese fleeing an Islamist insurgency in their country who were not subject to the Trump administration’s various bans. By 2020, the organization resettled just 150 refugees.

Over that time, Bethany closed its Allentown, Pennsylvania, office and put resettlement on hold at its Philadelphia office because of lower numbers of refugees arriving there. Its office in Kalamazoo, Michigan, also stopped offering resettlement services. That’s fully half of its refugee resettlement programming nationwide.

Some staff members were reassigned. Others left the organization, unable to do the work they had been hired to do.

As damaging as the staff cuts have been, the lack of clients has also allowed a network of volunteers at houses of worship who cosponsor refugees with Bethany to atrophy, as well as relationships with businesses that take refugees on as employees.

“Refugee resettlement is truly a public-private partnership. You do not get a lot of resources to resettle. You need those partnerships to make it happen, and to lose those and have to rebuild those will be a challenge for us,” said Dona Abbott, Bethany’s senior adviser for refugee and immigrant services.

Bethany Christian Services was founded in 1944 as an orphanage called Bethany Christian Home in Grand Rapids, Michigan. Today the organization’s headquarters stands on the same site — a leafy campus close to downtown — where it oversees about 1,500 employees worldwide. It has local offices in 32 U.S. states and half a dozen countries that offer a number of social services.

Its refugee resettlement services in Grand Rapids are run from a low-lying building in a nondescript office park south of downtown. Its rows of darkened cubicles reflect not only the resettlement slowdown, but also the effect of the pandemic that is only now loosening its grip on in-person work.

The organization began serving refugees in 1962, offering in-home services to relatives caring for Christian children sent to the U.S. to escape persecution in Cuba, according to Dona Abbott, Bethany’s senior adviser for global, refugee and immigrant services. Again, in 1975, it answered a call from then-President Gerald Ford, Grand Rapids’ most famous son, to help Vietnamese refugees after the fall of Saigon.

When former President Donald Trump took office, he temporarily halted the country’s refugee resettlement program and changed some criteria to qualify for resettlement. In 2020, he set the maximum number of refugees allowed into the U.S. for the year at just 15,000. By comparison, that number was 110,000 in former President Barack Obama’s last year in office.

President Joe Biden raised that number to 62,500 in May after resettlement agencies and immigration groups pressured him to keep his promise to restore the rate to previous levels. He has said he will move the ceiling to 125,000 in his first full fiscal year in office, which begins in October.

But Biden has also warned that the U.S. refugee resettlement program has a lot of work to do to rebuild the infrastructure that has been lost in the past four years.

“We are working quickly to undo the damage of the last four years. It will take some time, but that work is already underway,” the president said last month.

The White House did not respond to questions from Religion News Service about what rebuilding will entail.

But at Bethany, the work begins with reconnecting the chain of care.

“It’s a lot of communication, a lot of phone calls, a lot of calls with the state refugee coordinators. A lot of planning is happening right now. It kind of feels like I wouldn’t say going from zero to 60 miles an hour, but probably 15 to 60,” said Gleason, its vice president of refugee and immigrant family services.

Bethany will also need to hire and train new staff.

In all, Bethany depends on more than $100 million in revenue annually.

Gleason said Bethany is facing an additional challenge of the Trump era: tackling misinformation about refugees.

“We know this is what God is leading us to do, but it’s not going to be without its bumps and hiccups and challenges — and also, certainly, the rewards and the benefits for the families that we serve,” she said.

Abdoul Havugimana, 26, came to Grand Rapids a decade ago through Bethany with his younger brother and their grandmother, fleeing the Democratic Republic of Congo after nine years in a refugee camp in Rwanda.

After a warm welcome, he has seen his neighbors’ attitudes toward refugees change over the past four years.

“What they don’t understand is that no one leaves home until it’s dangerous,” said Havugimana, who is finishing a degree in political science at Calvin University in Grand Rapids.

Agencies like Bethany will also need to re-energize their volunteers, most of them in churches and other houses of worship, who have been inactive or working at reduced levels for years.

Fifth Reformed Church, nestled in Grand Rapids’ Eastgate neighborhood, has co-sponsored more than 75 Bethany refugees, according to its website, greeting refugees at the airport, collecting needed items for their new homes, acquainting them with local public transportation and tutoring them in English.

Fifth Reformed usually welcomes a refugee family or individual every six months, according to Dave Lubbers, 75, who co-leads Fifth Reformed’s refugee resettlement committee, founded about four years ago by a former refugee the church had welcomed. Last year, they sponsored only four.

To Lubbers, those refugees are “the most amazing people.”

He got involved with the committee after volunteering to drive two men to get their learners’ permits. Realizing the permits were of little value without somebody to teach them to drive, Lubbers asked if they’d like him to teach them — the words leaving his mouth, he said, before he even had time to pray about it.

Lubbers has enjoyed “knocking down barriers” for the refugees he has accompanied, but more importantly, he said, he feels it’s his “Christian responsibility.”

Jessica Sprunger said her family is hopeful their foster daughter will be able to join them before the new school year begins. She has heard that the long delay means the 16-year-old, currently in a refugee camp in Niger, may need to start the interview process over again.

She would love to work with their daughter on her English before she starts school. She has been working on learning Tigrinya, the girl’s native tongue. The language isn’t available on Google Translate, Sprunger said, but she has been learning common phrases and found a Tigrinya audio Bible.

In the meantime, Sprunger and her husband, Josh Sprunger, 35, who already have two daughters, ages 6 and 7, are expecting their third.

“We didn’t know that this was quite the order of how things would go, but God has a plan and a purpose in it, so we’re excited that our foster daughter can join us for the excitement,” she said.

Sprunger said she’s hopeful the new White House administration will “really open things up.” Meanwhile, her family, which attends a nondenominational Christian church, prays for their foster daughter every day, she added.

They can’t wait to “give her the love and support of a family,” she said, “and I’m sure we’re going to have so much to learn from each other.”