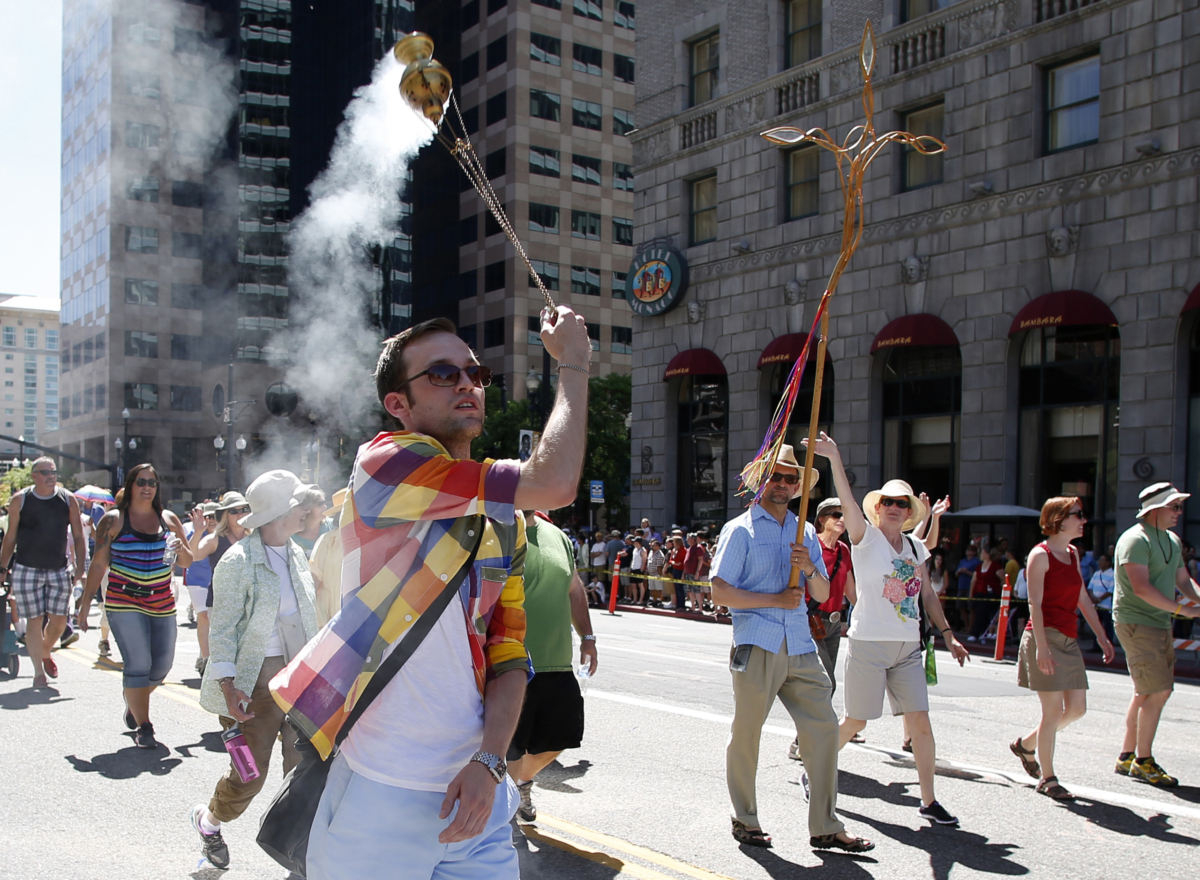 Charlie Knuth of All Saints Episcopal Church swings a censer as he marches in an LGBTQ pride parade in Salt Lake City, Utah, on June 2, 2013. Photo: Jim Urquhart/Reuters

[Episcopal News Service] For years, the LGBTQ movement in The Episcopal Church had a specific primary goal in mind: full participation in the sacraments, including matrimony and holy orders. After decades of activism by advocates like Louie Crew Clay and groups like Integrity, those goals were achieved – at least on paper – by 2018, when General Convention approved a resolution granting full churchwide access to same-sex marriage rites.

Three years later, the question of whether the campaign for LGBTQ acceptance in the church is complete is a topic of increasing discussion. For many LGBTQ Episcopalians, the answer is no, but the path forward is less focused on one legislative outcome and more on cultural shifts. The spectrum of gender and sexuality in America is increasingly diverse and visible, with more Americans than ever identifying as LGBT. However, Pride celebrations this month are coinciding with a record number of anti-transgender bills in state legislatures, largely centered around young transgender athletes and access to medical care.

While The Episcopal Church has been among the most progressive denominations in regard to LGBTQ acceptance, some say it hasn’t evolved enough. Criticism of Washington National Cathedral’s decision to invite the Rev. Max Lucado, who previously expressed anti-gay views, has revealed a rift in the church, with some saying the move was a slap in the face to LGBTQ Episcopalians. And when the Rt. Rev. Gene Robinson, the first openly LGBTQ bishop in the Anglican Communion, tried to assuage those concerns by saying “we’ve won” the battle for LGBTQ inclusion, for some, it has never felt that way – especially those who are not white and cisgender.

“That was a really striking moment to me as a Latino gay man,” said Miguel Escobar, executive director of the Episcopal Divinity School at Union Theological Seminary, during a House of Deputies discussion on May 18 titled “A Full and Equal Claim: LGBTQ+ Episcopalians Discuss the Path Forward.”

“I heard that and thought, ‘Wow, that’s not my experience as a person of color [in] this church, or member of society as an LGBTQ person.’”

Others on the panel agreed that the National Cathedral incident highlighted a disconnect in the church but also presented a learning opportunity, including the Rev. Cameron Partridge, rector of St. Aidan’s Episcopal Church in San Francisco, California, and a transgender man.

“I completely respect Bishop Gene and everything that he’s done,” Partridge told Episcopal News Service. “I think that the work is unfinished. And I think my sense is that the cathedral has heard loud and clear that there’s more work to be done.” 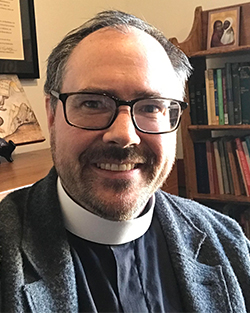 The Rev. Cameron Partridge. Photo courtesy of the Diocese of California

However, the goals now are more diverse and less tangible than they were in the 1990s and 2000s, when Integrity advocated for procedural gains at General Convention. With Integrity now essentially defunct, there is a less unified agenda, but two areas of concern have emerged from those who have been vocal on the issue. In public discussions and interviews with ENS, some LGBTQ Episcopalians have said the official stance of acceptance is not practiced on the ground in some areas of the church, especially when it comes to transgender and nonbinary people and LGBTQ people of color.

“People’s experiences are pretty uneven,” Partridge said. “People across the church should feel fully embraced and their leadership honored, and I think that is happening in a variety of places, but it’s not happening everywhere. And there’s a need to really embrace the gains that we’ve made legislatively within the church and to really embody them more fully.”

Partridge and others say many parishes, even ones that profess to be LGBTQ-inclusive, don’t have the experience or resources to fully welcome transgender and nonbinary people, let alone hire them or include them in leadership positions.

“Probably the biggest area for us to grow is … supporting trans and nonbinary folk in the church,” said the Rev. Charles Graves IV, the Diocese of Texas’ campus missioner in Houston. Graves told ENS he doesn’t feel comfortable referring LGBTQ students, especially those who are transgender and nonbinary, to some parishes because they might not have accepting and inclusive environments. Some of that is cultural, he said, but it also comes down to more practical issues. 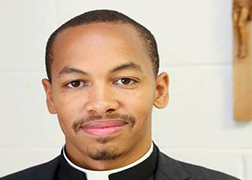 The Rev. Charles Graves IV. Photo courtesy of the Diocese of Texas

“Most churches don’t have a bathroom that a nonbinary person can go to and not feel weird about,” he said. “In a lot of places … if you’re somebody who uses they/them pronouns, you’re going to end up explaining that to people 500 times.”

Some LGBTQ Episcopalians of color have said that they experience additional barriers to acceptance. In a church that continues to struggle with racism within its structures and membership, their race magnifies the exclusion they already feel as LGBTQ people.

The constitutions and canons of some dioceses still officially ban gay clergy – unless celibate – and same-sex marriages, including Albany, Dallas and Central Florida. In the ordination application forms for Central Florida and Dallas, ordinands are asked to affirm that they will abide by the diocesan canons that define marriage as one man and one woman and stipulate that clergy must remain celibate outside of marriage.

According to The Episcopal Church’s canon law, churches in such dioceses that wish to perform same-sex marriages may seek pastoral oversight from another bishop, although even that was still prohibited in the Diocese of Albany as recently as January 2021. And some parishes explicitly state that they only marry heterosexual couples, including The Episcopal Church’s largest parish, St. Martin’s Episcopal Church in Houston.

“In some parts of the church, it may seem like full inclusion is no longer really an issue, like we’ve been there, done that, and we’re kind of on to the next thing,” said the Rev. Devon Anderson, rector of Trinity Church in Excelsior, Minnesota, and a member of Executive Council, “but I just think in so many other places, people … feel vulnerable because either local leaders aren’t supportive or because civil protections seem to be at risk.”

Anderson put forth a resolution that Executive Council passed at its April meeting, which expresses lament for the harm the church has done to LGBTQ people and pledges to do better. The resolution doesn’t mention the Max Lucado incident specifically, but Anderson said she was prompted to write the resolution by the reaction to that, as well as the Vatican’s statement in March that the Roman Catholic Church will not bless same-sex unions, calling them sinful.

“I had parishioners that were like, ‘How do I interpret all of this stuff that’s going on? Where’s the church in this? Am I still safe here? Is this someplace that’s going to use my gifts and deployment fully in ministry and offer me all the sacraments?’” she told ENS.

The resolution “confesses the Church’s continued heterosexism, homophobia, biphobia and transphobia, and the ongoing harmful impact of anti-LGBTQ+ Christian proclamation, preaching, pastoral care, and theology” and expresses a renewed commitment to ensuring that LGBTQ people experience a “full and equal claim” to church life.

Anderson, who consulted with Partridge and other LGBTQ Episcopalians in crafting the resolution’s language, said she thought the church needed to acknowledge the rejection and pain some are still experiencing and reassure them that the church’s leaders are still working to ensure they are welcomed everywhere.

The resolution itself does not solve the existing problems, she said, but it provides a basis for more specific actions to that end.

“You can’t mobilize anybody around a platitude, and in some ways, you could look at this resolution and think, ‘Wow, that’s another platitude,’” but it goes deeper than that, she told ENS.

“[It says,] we’ve committed ourselves resolutely to this vision, and the church is going to make serious mistakes and that doesn’t mean that the vision isn’t still intact or any less sacred,” she said.

A range of more specific solutions have been proposed, including ideas for General Convention resolutions that came up during the May 18 House of Deputies webinar. One potential resolution to address discrimination in hiring clergy might involve “finding ways to make the search and call process truly open and inclusive,” said House of Deputies President the Rev. Gay Clark Jennings during the webinar. Other ideas included a sexuality and gender audit, similar to the racial justice audit the church just performed.

Partridge and Graves told ENS that one of the major challenges ahead is translating resolutions and statements into visible actions on the diocesan and congregational levels. Partridge praised the efforts of the TransEpiscopal advocacy group, which has been active since 2005 and is currently working on compiling a list of readings and resources to help educate Episcopalians on transgender issues. He hopes that parishes will host workshops and reading series that will help them not only welcome the transgender and nonbinary people who may visit, but also embrace and honor those who are already in their congregations or have family members who are.

“It’s not like a not-yet thing; it’s a reality,” Partridge told ENS, “and people need to feel fully embraced and supported, and to really truly feel that The Episcopal Church has their back.”