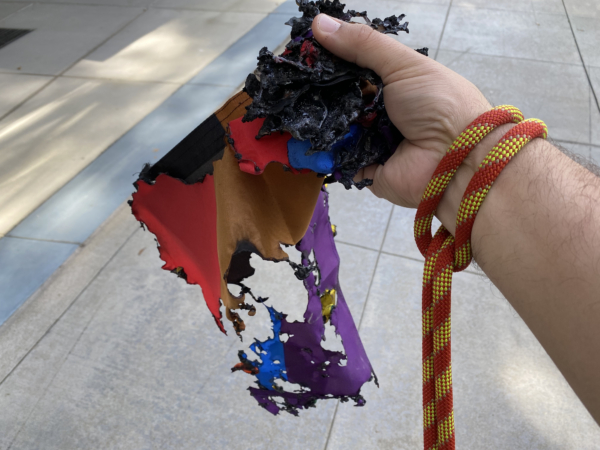 Charred remnants were all that was left of Trinity Episcopal Cathedral’s LGBTQ Pride flag on June 4, 2021, in Sacramento, California. Photo: Matthew Woodward

[Episcopal News Service] On the first weekend of LGBTQ Pride Month, someone ripped down and burned the rainbow Pride flag flown by Trinity Episcopal Cathedral in Sacramento, California.

The Very Rev. Matthew Woodward, dean of the cathedral, told The Sacramento Bee that he discovered the vandalism on the morning of June 4, as Pride events were beginning across the city.

“It made me sad this morning to see that somebody wanted to take down what we think was a sign of love and burn it, but love isn’t that easily defeated,” Woodward told The Bee, his voice breaking with emotion. “So – just gotta buy a new flag.”

In an email to her diocese, Northern California Bishop Megan Traquair said the Sacramento Police Department is investigating. Traquair “condemn[ed] this act of hatred” and asked her diocese to pray for the person who did it.

“While the monetary value of the flag is minimal, the symbolism of the act is immense,” she wrote. “The Pride flag is a symbol of love, of struggle, of sacrifice, by generations of our brothers and sisters. I realize that not all are accepting of our LGBTQ neighbors, but we should all be united in condemning this act. Christ calls us to show love and respect to our neighbors.”

Far from being deterred, Woodward, who is gay, decided to step up his Pride celebration. Though the rainbow flag in front of his church was gone, he wore a rainbow cape as he walked his dog, River Song, in the Ru Paws Drag Race dog parade.

“It felt nice to be among friendly, affirming people this morning,” Woodward said. “We’re trying to have a conversation with each other in public around our lives as gay people and say, ‘God created everybody. God loves everybody. God created me. God loves me.’ There are people that find that difficult to hear.”

According to the most recent statistics compiled by the FBI, anti-LGBTQ hate crimes made up 19% of all reported hate crime incidents in the United States in 2019. Though the number of reported anti-LGBTQ incidents overall has remained relatively steady in recent years, the number of incidents specifically targeting transgender and gender-nonconforming people doubled from 2014 to 2019.

LGBTQ Pride Month, which celebrates the community, culture and liberation of lesbian, gay, bisexual, transgender and queer/questioning people, is marked each June by parades and festivals around the U.S., and has long been celebrated by The Episcopal Church and individual congregations.