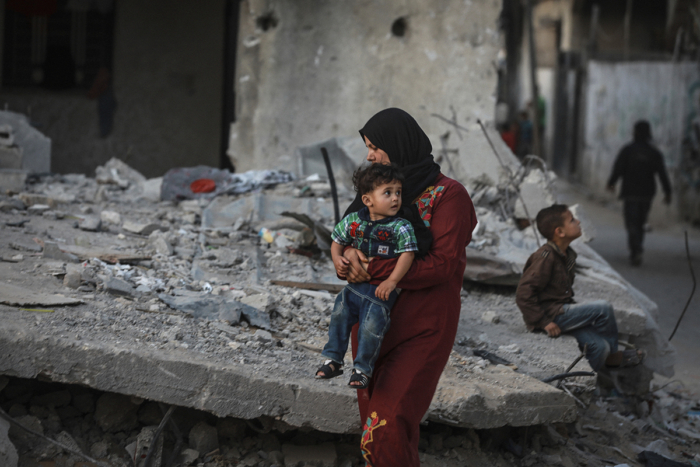 Palestinians are seen June 1 outside their homes, heavily damaged during recent Israeli strikes, in Beit Hanun in the northern Gaza Strip, more than a week after a ceasefire brought an end to 11 days of hostilities between Israel and Gaza rulers Hamas. Photo: NurPhoto via AP

[Episcopal News Service] Tensions over the evictions of Palestinian families in East Jerusalem boiled over last month into 11 days of fighting between Israel and Hamas. Before agreeing to a May 21 ceasefire, Hamas fired rockets from the Gaza Strip into Israeli cities, while Israel launched airstrikes that leveled buildings in Gaza. Those attacks, along with clashes in Jerusalem between Palestinian protesters and Israeli police, reportedly left at least 260 Palestinians and 12 Israelis dead and hundreds more injured.

One constant before, during and after the turmoil has been the ministry of Al Ahli Arab Hospital, a Diocese of Jerusalem facility in Gaza City that saw a surge in patients while sustaining minor damage during the Israeli airstrikes.

“Our ministry is a ministry of healing and love and reconciliation,” Anglican Archbishop Hosam Naoum told Episcopal News Service in a Zoom interview on June 3. His diocese operates Al Ahli as a charity hospital, catering to impoverished families in Gaza, many of them Palestinian refugees. Other public hospitals in Gaza treated most of the patients who were injured during the Israeli airstrikes, Naoum said, and Al Ahli Arab Hospital’s 65 beds filled quickly with other patients who had been diverted there for non-emergency treatment, such as surgeries.

Naoum expressed gratitude for the support his diocese has received from across the Anglican Communion, including from The Episcopal Church’s Good Friday Offering and from the fundraising of the American Friends of the Episcopal Diocese of Jerusalem, or AFEDJ. “That’s the greater sense of the body of Christ,” he said.

AFEDJ updated its donors by email on June 3 with a report from the hospital’s director, Suhaila Tarazi. “There is no family that has not been affected by this war either physically, emotionally, or economically. Families have been shattered by its devastating impact, especially children,” she said. “Due to the closure of government health centers, Ahli now has an increased number of patients coming to us for treatment.”

The hospital wasn’t hit directly by last month’s airstrikes, but one explosion was close enough to shatter windows at the hospital. No one was hurt, Naoum said.

The hospital has about 120 full-time, part-time and seasonal employees. Naoum said one effect of the flareup of violence was that many of those employees camped at the hospital, some bringing their families, because travel between their homes and the hospital was limited by the attacks.

The fighting also disrupted Gaza’s power grid, and money raised by AFEDJ was used to buy fuel for generators so the hospital could remain open during outages. The hospital also was able to purchase medical supplies and increase its free community clinic from one to four days a week.

“We are grateful for your prayers and generosity,” Tarazi told AFEDJ. “Though the situation in Gaza is horrifying and grim, we at Ahli are confident that through your support we will replace despair with hope, mourning with comfort, humiliation with dignity, and injury with healing.”

The clashes across Israel and the occupied Palestinian territories escalated last month just as Naoum was to be installed as archbishop. His installation ceremony was held May 13 at St. George’s Cathedral in Jerusalem amid tightened security in the city.

The COVID-19 pandemic was a primary reason some Anglican bishops chose to watch the installation online rather than come to Jerusalem for the ceremony, Naoum said, though the Israeli-Palestinian conflict also has disrupted some travel to the city. St. George’s College typically hosts Holy Land pilgrims in its guest house; although many pandemic restrictions are being lifted as conditions improve, one group of pilgrims from the United States that had planned to visit in May chose to postpone their trip until September because of the renewed violence, Naoum said.

In a written statement May 17 while the hostilities were still underway, Naoum praised Al Ahli Arab Hospital’s work on the “frontlines of these relief efforts,” but he warned that the conflict was overwhelming the hospital’s resources. “I therefore issue an appeal to our international partners and all people of goodwill to support this humanitarian mission through their generous contributions to Al Ahli Hospital, enabling them to show forth the compassionate love of Christ in real and tangible ways in these desperate circumstances.”

AFEDJ Executive Director John Lent emphasized those needs in a message to his organization. “The healthcare system in Gaza has been overwhelmed by the pandemic,” Lent said. “Many clinics and hospitals closed during the pandemic and never reopened. Hospitals already are at full occupancy with COVID patients. There are severe shortages of medical supplies, medicine and blood. This escalating conflict pushes Gaza’s healthcare system way past the breaking point.”

Presiding Bishop Michael Curry also offered support for the people of the Holy Land on behalf of The Episcopal Church. “We find ourselves full of sorrow and sadness,” Curry said on May 13. “We find ourselves grieving over the loss of life, destruction of homes and the fear that lives in the hearts of tens of thousands of innocent people. We join all people of faith to offer up prayers for healing, wholeness, restoration and reconciliation.”

Those prayers and the church’s support continue in the aftermath of the fighting, as all sides struggle for a lasting peace.

“The Episcopal Church continues to work in solidarity with the Diocese of Jerusalem and organizations like AFEDJ as we work for peace, advocate for human rights, seek to end the sources of violence and raise funds to benefit the ministries of the Diocese,” the Rev. Robert Edmunds, the church’s Middle East partnership officer, said in an email to ENS.

Naoum, in his June 3 interview with ENS, said his Anglican diocese is uniquely positioned to be a force for reconciliation in the area, partly because of ministries like Al Ahli Arab Hospital.

“We are known for being bridge-builders … bringing people closer together in these difficult times,” he said.