[Episcopal News Service] When the Rev. Dr. Marta Illueca was a child, her Roman Catholic family was traditional and powerful. Her father Jorge was elected president of Panama in between stints as president of the United Nations Security Council and General Assembly; her mother was a teacher-turned-nurse who went to graduate school in her 60s before establishing Panama’s first nursing school. Illueca’s focus was different. “I was very spiritual and very curious about the whole process of spirituality, even beyond Christianity,” she said. That interest deepened in 1971, when Illueca was 12 and her 22-year-old sister Linda died of an undiagnosed heart condition. Illueca focused her early studies on medicine — until hearing the call to ministry in her 50s. 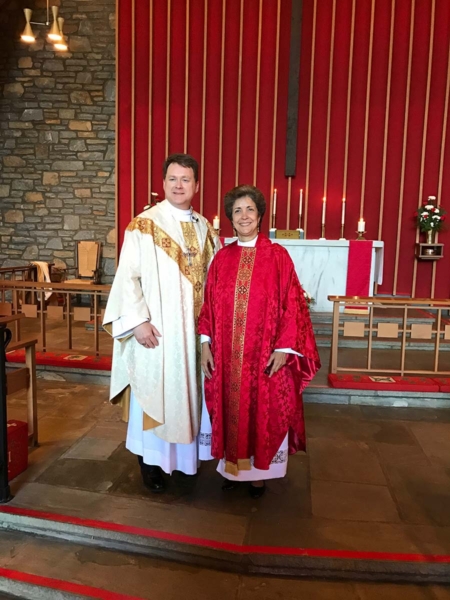 Delaware Bishop Kevin Brown with the Rev. Dr. Marta Illueca after her ordination in 2019. Photo: Courtesy of Marta Illueca

Now 61 and an ordained Episcopal priest at Brandywine Collaborative Ministries in Delaware since 2019, Illueca is bringing her medical and religious expertise to a research project on what types of prayers are most helpful to patients with chronic pain. A 2019 survey found that chronic pain affected approximately 20% of adults in the United States and 7.4% had chronic pain so severe that it limited their activities. Officially launched last fall as the first project of the Pain and Prayer Collaborative, the study is a joint effort of the Episcopal Church in Delaware and Brigham and Women’s Hospital in Boston, Massachusetts.

“Health care is starting to open up to spirituality, but if you don’t have data, then you’re going to be kept at bay, or at a distance,” said Illueca. As clergy-medical liaison, she is co-leading the study with pain psychologist Samantha Meints. Illueca’s position is funded by a 2020 United Thank Offering grant and supported by the Episcopal Church in Delaware.

The investigation, which Illueca calls “the poster child” of a church/academia research model, aims to measure how active versus passive prayers affect chronic pain. An active type of prayer is, “Help me endure this, help me get through this,” Meints said, whereas passive prayer sounds more like, “God, please take my pain away.”

The study focuses on personal prayer, in which one prays for oneself, rather than on intercessory prayers, which are offered by one person on behalf of another. The data will come from the results of an online questionnaire of participants’ prayer practices and pain. From the results, Illueca and Meints will design a prayer tool, written as a brochure outlining the types of prayers most likely to help people cope with chronic pain and, hopefully, feel better. The brochure will be available not only to patients but also to hospital chaplains, clergy and others.

People of all faiths who believe in the power of prayer are invited to complete the questionnaire. As of early May, 140 people had completed it; Illueca and Meints hope to have 400 to 500 by early June. They’ll evaluate their findings this summer, aiming to have results in September.

The study’s connections to the academic, medical and religious worlds make this partnership unique, according to Dr. Benjamin Doolittle, who serves as director of the Yale Program for Medicine, Spirituality & Religion. “That is very unusual. Big academic medical centers partner with each other all the time,” he said. “What we don’t see is academic medical centers partnering with the church in a very intentional way.”

According to a 2018 article in the AMA Journal of Ethics, even though religion is important to their patients, doctors avoid the subject: “Believing the question is outside their expertise, worrying that they will say the wrong thing, or having discordant beliefs regarding religion, physicians are not sure what to say,” the authors wrote.

Doolittle hopes the Pain and Prayer Collaborative will further the conversation about prayer in medicine. “Our patients practice these interventions, and it can be very helpful to say, ‘Yes, these are good things to do. We have data to show it makes a difference,’” he said, adding that it’s equally important if the study shows that prayer doesn’t make a difference.

Delaware Bishop Kevin Brown expressed hope for Illueca and Meints’ work. “It would be tremendous if their thesis [that active prayers have a greater positive impact on chronic pain than other kinds of prayers] is proven true, that they’re able to create a scale that allows medical professionals to use prayer as a viable treatment for chronic pain,” he said. Doolittle agreed: “We need to do these kinds of studies because it’s a way for the medical community to give credence to this important adjunctive therapy for pain. So we need data,” he said.

Earlier in Illueca’s career, when she was practicing pediatric medicine at New York City hospitals, she traveled to sacred places and developed a reading program to further her spiritual development. “My sister’s death was pivotal in opening up my ‘spiritual’ gifts, and it was the start of a lifelong soul search that eventually led me to my priesthood,” Illueca said.

In 2003, nearly two decades into her clinical work and ready for a career change, Illueca moved to Delaware to work for AstraZeneca, eventually becoming the biopharmaceutical company’s medical affairs officer. “In that period of time, I stumbled upon The Episcopal Church,” Illueca said. Christ Church Christiana Hundred in Wilmington became her spiritual home in 2010, and Illueca learned that The Episcopal Church ordained female priests. She became active in her congregation, going on mission trips to the Dominican Republic. “That’s when the vocational calling to priesthood came alive. It just sort of unfolded,” Illueca said. “All of a sudden these new doors were opening.”

She retired early from AstraZeneca in 2014 to enroll in Berkeley Divinity School at Yale University. In her last year at AstraZeneca, she had met Dr. Daniel Carr, director and founder of Tufts University’s Pain Research, Education & Policy program, while working on a medication for pain patients. Illueca sensed an opportunity to combine medicine and spirituality through pain treatment and studied part time at Tufts while completing her master’s degree at Yale full time; upon graduating from Yale, she studied full time at Tufts.

At Tufts, Illueca did a systematic review of existing research into pain and prayer, working with Doolittle, who is also a physician and a pastor. As Illueca analyzed past studies, she realized those that found prayer had no positive effect on pain drew upon the results of one specific coping styles questionnaire. “I thought, ‘Something’s not right here,’” she said. It turned out that the questionnaire only specified prayers asking God to take the pain away.

Then she came across Meints’ research into active versus passive prayer as a tool for pain management across race, which showed that while Black patients prayed more than non-Black patients, their pain tolerance was lower.

“We know in the broader literature that prayer and religiosity are generally predictors of better health outcomes, not worse, so it was a bit perplexing,” Meints said. She found, as Illueca had, that earlier studies had only included passive prayers, as opposed to active and empowering prayers.

Compelled by Meints’ findings, Illueca sought her out, and the two finally connected in person in May 2019. Illueca proposed partnering on a study that would combine Meints’ “pioneering work” and her own theological credentials, she said. Equally compelled, Meints agreed. Their work together, Illueca stressed, continues to evolve, in part because it is so new. “This is happening as we speak,” she said.

Illueca and Meints view their study through slightly different lenses: one guided by data, one by the spirit. “In research, bias is something you want to avoid. I am a religious, spiritual person, so I am biased. There’s no way around it. I believe in prayer in a depth that others may not,” Illueca said. “Samantha [Meints], whom I consider very spiritual, is not religious at all, apparently. So, therefore, she goes strictly by the data, and I tease her because I say, ‘What you call the data, I call the Holy Spirit.’”

Illueca sees in this study the potential for pastoral care workers to “walk into the health care space and say, ‘Science has validated this, and I want my voice to be heard,’” she said. For her part, Meints hopes this will be the first of many Pain and Prayer Collaborative studies: “People pray in response to pain, and we want to be able to capitalize on that and make it the most useful for them.”