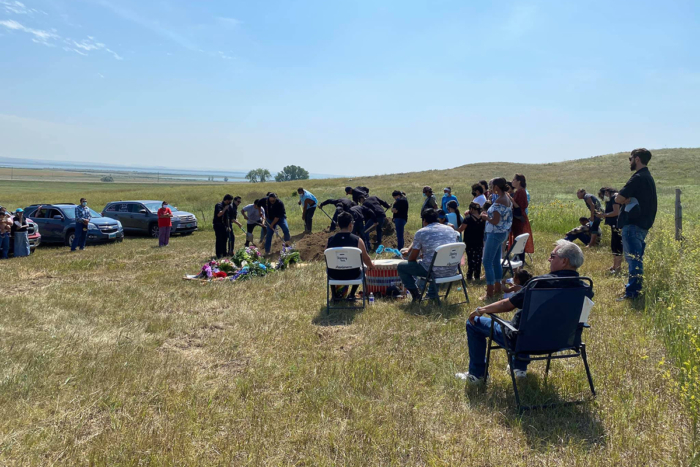 [Episcopal News Service] When a member of the Standing Rock Sioux Tribe dies, the person’s family begins a prolonged period of grieving, spending up to a year in mournful contemplation that is rooted in the sacred Sioux rite of the “keeping of the soul,” said Elaine Brave Bull McLaughlin, chair of the North Dakota Council of Indian Ministries.

At the end of that year, the family typically invites friends and relatives to a memorial feast in honor of their lost loved one, but under the past year’s pandemic precautions, families were forced to postpone such large celebrations to inhibit coronavirus transmission. Now, some families are eager to resume in-person community gatherings like the memorial feasts, McLaughlin told Episcopal News Service. “There are families that would love to do something like that, or just to be prayed [over] and given some sense of normalcy in this whole crazy time.”

Conditions on the Standing Rock Sioux Reservation, which stretches over the border between North and South Dakota, have improved dramatically this spring. COVID-19 vaccines now are widely available to tribal members ages 12 and older, and the number of new daily cases has dwindled to single digits in recent months. Some days, no new COVID-19 cases are reported.

As families look to reschedule memorial gatherings and meals this summer, the Diocese of North Dakota plans to use a $17,000 grant from The Episcopal Church’s United Thank Offering to provide some of the food for up to 30 memorial meals. “We believe that these traditions, these practices, are so central to the grieving process, we thought that we’d come in and assist our members and other people in the community,” the Rev. John Floberg told ENS.

Floberg, as rector of three North Dakota Episcopal congregations on Standing Rock, has seen the toll that the coronavirus pandemic has taken on families and the community. He estimated that he has presided at about three funerals a month over the past year, approximately a third of them related to COVID-19. Those services had to adhere to tribal and diocesan prohibitions on large gatherings. Sometimes the services were limited to a small group of close family members attending a graveside committal.

“Families that had been planning to have a memorial for a death that had happened the prior year, those have also been put on hold,” Floberg said. “A very significant aspect of a family’s grieving process has been interrupted very significantly.”

Last fall, when the weather turned too cold for outdoor services, he was able to move funerals into the churches while following diocesan limits on the length of services and number of people attending. Social distancing was a challenge.

“Those situations are really difficult because, again, we’re dealing with the way that things are normally done, customs and ways that people are used to grieving. So telling people, ‘Please don’t hug each other’ and ‘Even though you’re related, the virus doesn’t care,’ that was difficult to deal with,” he said.

Out of more than 1,000 cases of COVID-19 on the Standing Rock Sioux Reservation, an estimated two dozen people have died, according to North Dakota and South Dakota statistics. McLaughlin, who is a member of St. James’ Episcopal Church in Cannon Ball, North Dakota, said her son contracted the coronavirus in September. He had a high temperature for a couple days and quarantined for two weeks but was fine otherwise. Another relative, a cousin, died in December less than two weeks after testing positive for COVID-19.

McLaughlin described the traditional yearlong mourning period during which Sioux families partly withdraw from community activities to focus their thoughts on memories of the deceased. “At the end of that year, food was prepared to share with people,” she said. “What they called it was ‘letting the spirit go,’ so they would invite people to come and have a meal for them. A special plate was prepared for the person who passed away.”

Families also would provide clothes, quilts and other items as gifts for those who came for the meal, acknowledging their connection to the deceased and thanking them for their kindness during the year of mourning. Turnout could range from 30 people to a couple hundred. Sometimes during the meal, a gust of wind would sweep through the gathering, which mourners interpreted as the final exit of their deceased loved one, McLaughlin said. “They say, ‘The spirit has left us.’”

Floberg said he anticipated that paying for such meals would be more difficult this year for families dealing with pandemic-related job losses, especially in communities already struggling with poverty. The idea behind the UTO grant was to purchase the more expensive part of the meals – the meat – and offer it to the families.

Floberg plans to buy prime-cut beef in large quantities for a better price and then cook it in a large roaster or smoker in his backyard. The meat then will be sealed in bags and kept in freezers at St. James’, St. Luke’s Episcopal Church in Fort Yates and St. Gabriel’s Camp in Solen. When families gather for their memorials, the meat can be thawed and warmed up, enough to feed about 125 people per meal.

The meat also will be served at meals during the Niobrara Convocation, an annual gathering of Indigenous Episcopalians to be held June 26-27 at St. Gabriel’s Camp. The rest of the meat will be served during an Episcopal youth camp this summer aimed at helping young people on Standing Rock recover from a year of disruptions caused by the pandemic.

McLaughlin lauded the work of the tribal government and the federal Indian Health Services in organizing and promoting vaccination clinics on Standing Rock, which have helped reduce the threat of COVID-19 this year. As summer approaches and large community gatherings resume, memorial feasts again will become central to families’ mourning.