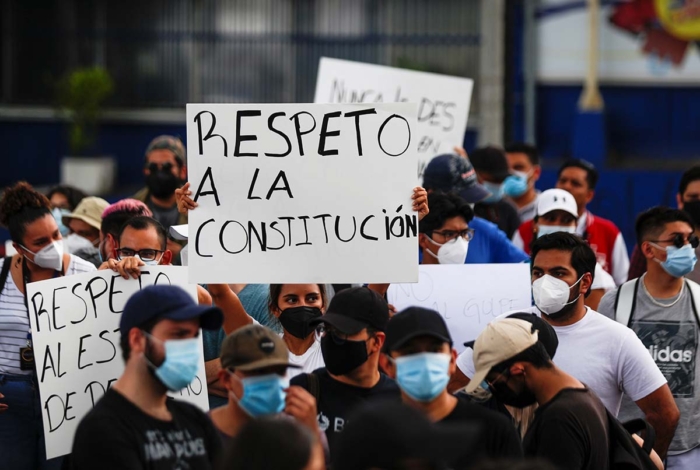 In San Salvador, El Salvador, on May 2, people hold signs reading “Respect for the constitution,” as they protest against the Salvadoran General Assembly’s removal of Supreme Court magistrates and the attorney general. Photo: Jose Cabezas/REUTERS

“As you gather together for your first in-person diocesan convention since COVID-19 began, I write to assure you that we in The Episcopal Church are holding all of you in prayer, giving thanks to God for you all and the opportunity you have to be with one another again. We have a long and deep history of relationship with your diocese, grounded in our love of God and each other,” Curry wrote in the May 26 letter, timed for delivery with the diocese’s convention this weekend in San Salvador, the capital.

“It is in the spirit of this deep relationship that we stand in solidarity with you during this time of both global health pandemic and the challenges of working for peace and human rights. Indeed, we have long been inspired by the ways that the Iglesia Episcopal Anglicana de El Salvador has been a champion of human rights,” he said.

El Salvador’s legislative assembly voted earlier this month to remove the five magistrates of the country’s Constitutional Court, a chamber of the Supreme Court, as well as its attorney general, furthering a move by Bukele, who was elected president in 2019, to consolidate power for his popular New Ideas party.

International criticism followed, with some leaders worldwide calling the government’s action a legislative or “technical coup.” The Biden administration said the move violated El Salvador’s constitution and stands to weaken other democratic institutions, a concern shared by churches and nongovernmental organizations engaged in justice work in the area.

“Our fear is that, just as they did it with the Supreme Court, it’s going to happen to other government institutions, and we consider it a test of democracy in El Salvador. … It’s a hard political moment for us right now,” El Salvador Bishop David Alvarado told Episcopal News Service through an interpreter. Curry’s letter, he said, reminds the church in El Salvador that it is not alone. “We feel the solidarity of the church, and it makes us feel like our church here in El Salvador matters to the rest of the church and that their prayers are with us.”

Curry’s letter follows a letter sent last week by the general secretaries of the World Council of Churches and the global ACT Alliance, who also expressed concern over recent political developments.

“You have experienced firsthand the pain of violence and oppression and have chosen to reflect the love of God in a world that is in great need of that witness. In our Anglican tradition, we promise to ‘seek and serve Christ in all persons, loving our neighbors as ourselves, and to strive for justice and peace among all people, respecting the dignity of every human being.’ We see these same ideals lifted up in the Universal Declaration of Human Rights. … We continue in solidarity with you in the mission and ministry of the Iglesia Episcopal Anglicana de El Salvador, and the larger Iglesia Anglicana de la Región Central de América,” Curry said.

El Salvador’s Protestant churches – members of the Latin American Council of Churches – have not come under direct threat or persecution, though their normally open communication with elected leaders and government officials and agencies has been “blocked,” Alvarado said. “We don’t feel the freedom to participate and raise our voices,” and recent requests for meetings with the vice president and other officials have been denied. They also have been shut out of conversations with the government agency that oversees churches and NGOs, which has expressed “no interest in working with the historic churches,” he said.

The Anglican-Episcopal Church in El Salvador is part of the Anglican Province of Central America, a region beset by violent civil wars in the 1980s and ’90s and whose churches, both Protestant and Roman Catholic, have historically worked for peace and justice.

“For decades, churches in Latin America have shown the love of Jesus by standing with the poor, the marginalized and those whose voices are otherwise not heard. Their ongoing faithful work is an example to us all, as is that of faith-based organizations like Cristosal, which has helped lift up the human rights of all people in El Salvador and strives to address many of the root causes behind the dramatic migration patterns we see all around us,” the Rev. Chuck Robertson, canon to the presiding bishop for ministry beyond The Episcopal Church, told ENS.

Earlier this month, the U.S. Agency for International Development, or USAID, announced it would divert funds from the Salvadoran government directly to civil society organizations, or NGOs, citing deep concerns over the legislative assembly’s May 1 actions.

In his letter, Curry also called out specifically the work of Cristosal, whose executive director Noah Bullock has lived in El Salvador and worked for the advancement of human rights there for over a decade. Bullock also is an Episcopal Church-appointed missionary.

“We walk alongside Cristosal, whose ministry to advance human rights in Central America is such an integral part of the Anglican spirit around the world,” Curry said.

From 1980 to 1992, El Salvador suffered a brutal civil war fought between its U.S.-backed, military led-government and a coalition of guerrilla groups organized as the Farabundo Martí National Liberation Front, or FMLN. The war was fueled mostly by the gross inequalities that existed between a small group of wealthy elites who controlled the government and the economy and the majority of the population living in extreme poverty. (Bukele, the former mayor of San Salvador, was expelled from the FMLN in 2017 for allegedly breaking party rules, and he later went on to create the New Ideas party.)

Cristosal began in 2000 as a partnership between Episcopal clergy in the United States and El Salvador. Maintaining Episcopalians’ support, it later became an independent NGO and now works across the El Salvador, Guatemala and Honduras on issues of forced displacement, corruption, the monitoring and prosecution of human rights violations, and litigating past war crimes, including taking the lead in the El Mozote massacre case. The constitutional court – the Supreme Court chamber whose magistrates who were removed earlier this month – recently opened a path for investigation in the now ongoing trial of that case after more than a quarter-century.

“Democratic governance and the democratic institutions are guarantees of human life, and if they’re undermined and weakened those protections are lost for Central Americans. … That’s where our work is rooted, and the inspiration for that work has always come from the church. … The best way for us to keep ourselves safe is to counter the increasingly hostile public narrative against human rights organizations and to make visible the almost universal support our cause has around the world. It puts a spotlight on us to keep us safe.”

– Lynette Wilson is a reporter and is managing editor of Episcopal News Service.