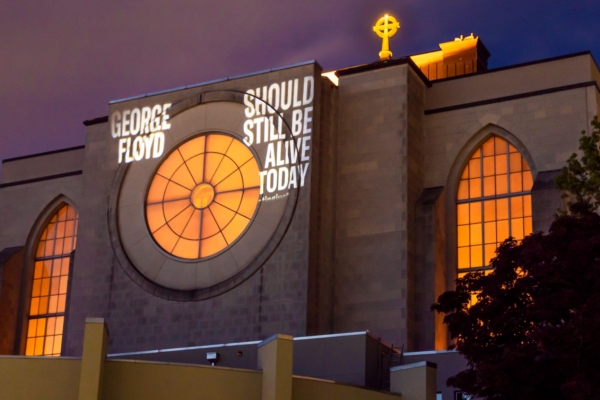 St. Mark’s Episcopal Cathedral in Seattle, Washington, is projecting the names of George Floyd and others killed by police onto the side of its building. Photo: Brian Smale

[Episcopal News Service] St. Mark’s Episcopal Cathedral in Seattle, Washington, marked the anniversary of George Floyd’s murder by mourning his death and extending public awareness to Washingtonians killed by police, using its most visible asset: the façade of its Capitol Hill building.

From May 25 through June 8, Floyd’s name and the names of more than 30 people killed by police in Washington state will be projected onto the cathedral’s western side, where they will be seen by thousands of drivers on Interstate 5. The names are projected for at least two hours after sunset each night, and are accompanied by the words “should still be alive today.”

Among those names is Herbert Hightower Jr., who was killed in 2004 by Seattle police while apparently experiencing a mental health emergency. Hightower’s mother, sister and other relatives came to see his name projected onto the cathedral on May 26, held a brief vigil and expressed gratitude that his name had not been forgotten, cathedral communications director Greg Bloch told Episcopal News Service.

“I was honored to greet the family of Herbert Hightower Jr. last evening, and listened to his mother and his brothers and sister speak fiercely of their desire for justice and their yearning to understand the circumstances of his death,” the Very Rev. Steven Thomason, dean of the cathedral, told ENS. “They also were clearly moved by the sight of his name on the cathedral façade, which serves as a beacon of hope for the city and region.

“Not only did we ‘say his name,’ but their abiding love for him humanized his story for me, incarnationally, and I consider that a cherished gift. We are honored to participate in this project.”

The project is a collaboration with the ACLU of Washington and the Washington Coalition for Police Accountability. The cathedral and its partners hope to bring awareness to the dozens of people killed by police in Washington every year, many of whom died in circumstances similar to Floyd’s but never gained widespread attention. Police officers in Washington kill 40-50 people each year – disproportionately people of color, according to the ACLU.

The project includes a website that lists the names and the ACLU’s description of how each person died. The names have been included with the consent of their families through the WCPA.

“Many who have never set foot inside the cathedral are familiar with St. Mark’s as the big church on the hill that they drive past every day,” said the cathedral’s press release. “It is good and right to be able to leverage our most prominent public asset, the building itself, to ‘say their names’ in such an extraordinarily visible way.”