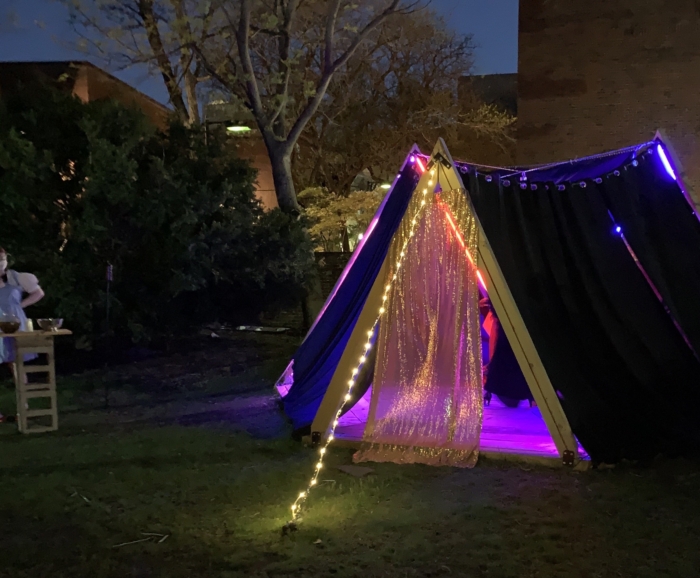 The “prayer tent” in the backyard of the Episcopal Chaplaincy at Harvard University is decorated for a performance of “LadyMass” in May 2021. Photo: Sarabinh Levy-Brightman

[Episcopal News Service – Cambridge, Massachusetts] If you walked past the Episcopal Chaplaincy at Harvard University on a recent evening, you might have heard chanting, music and bells, smelled incense and gotten a glimpse of robed figures. There was a liturgy going on in the backyard of the chaplaincy’s stately colonial building, but not one of the Eucharistic rites found in the Book of Common Prayer. It was a chaplaincy-staged experimental performance art piece that deconstructs and reassembles the Eucharist through a feminine lens.

“LadyMass: Rites of the Emerald Table,” performed over the past two weekends, is a walk-through experience with multiple stations, each with a performer the audience can interact with. Over the course of about a half-hour, audience members meet several recognizable, yet twisted characters that incorporate aspects of Christianity and pop culture. And though it may not be apparent at first, the basic elements of the Eucharist are there: the Word and the offering of food and drink. 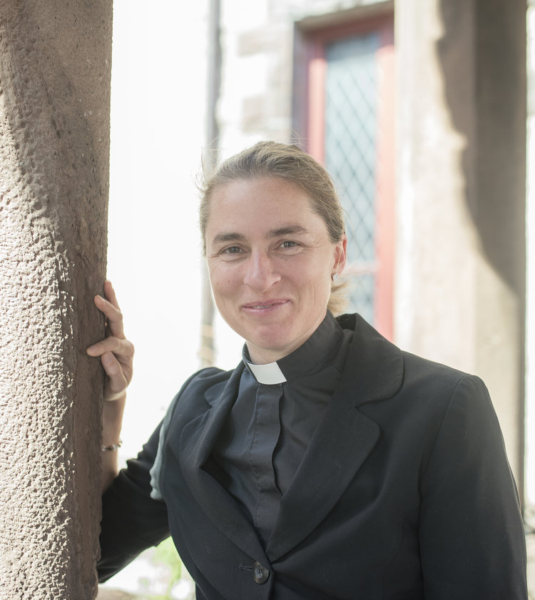 The Rev. Rita Powell, who organized the collaborative project, began envisioning something like it when she became Harvard’s Episcopal chaplain two years ago. Powell hired Meredith Wade as the chaplaincy’s Kellogg Fellow in part because of their shared interest in art as ministry.

“We wanted to use the creative arts to reach out beyond what the borders of the church are,” Powell told Episcopal News Service. “We didn’t just want to be a place that welcomed people who already knew they wanted to be Episcopalian, but we wanted to actually be a presence on campus in a visible and not entirely churchy way.”

Powell and Wade enlisted Kirsten Cairns, the founder and artistic director of Enigma Chamber Opera, to develop their ideas into a production. In her previous position at Trinity Church in Boston, Powell had worked with Cairns, who brought her extensive theater experience to projects like a dramatized Good Friday service.

“One of the elements that was important to me is just thinking about how to make the arts accessible and how to help people engage their creative selves, even if that’s not what they do for a living or if it’s not what they’re formally trained in,” Wade said.

The three women drew inspiration from “Sleep No More,” an adaptation of “Macbeth” in which audience members walk through a hotel and learn parts of the story from performers throughout the building.

Their ideas centered around staging something like the Eucharist, but infused with elements that churches don’t usually associate with it, like femininity and spectacle. Cairns looked to the medieval church’s mystery and morality plays for ideas.

“The church has a tradition of playing with revelry, pageantry, the absurd, in order to communicate and teach lessons, especially when you go back to a time where most people didn’t read and the mysteries of the actual Eucharist were not for most people to see, so in some ways we’re just going back to our roots here,” Cairns told ENS. 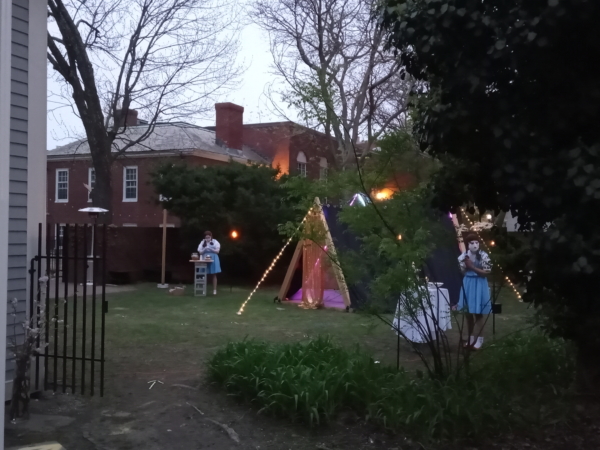 “LadyMass” was set up in the backyard of the Episcopal Chaplaincy at Harvard. Photo: Kirsten Cairns

Powell, Wade and Cairns all performed in the show, along with Powell’s daughter and several students, one of whom plays a character based on the White Rabbit from “Alice’s Adventures in Wonderland.” Students also created the sound effects for another station, at which a dark, robed figure appears to worship a toy Elmo that speaks various excerpts from the writings of Evagrius, the fourth-century Christian mystic, newly translated by a Harvard Divinity School professor.

Cairns emphasized that the discomfort audience members may feel at some of the imagery is meant to be thought-provoking, not disrespectful. 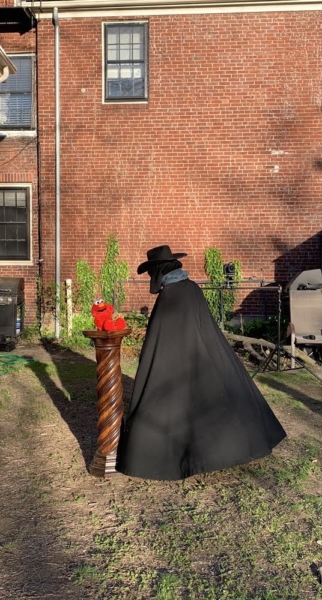 “When you say that you’re being absurd in the liturgy, people might have an initial reaction of ‘That’s sacrilegious,’ ‘That’s irreverent,’ ‘That’s offensive,’ ‘You’re mocking the church,’ which is absolutely not what we were doing,” she said. “In many ways, I think there’s a greater reverence in saying, ‘These are profound mysteries that we cannot possibly understand.’”

Cairns wanted to unsettle the audience’s ideas about what the Eucharist is and who can participate in it, “playing with what is being offered, who is offering it and what is being consumed.” To that end, there are three simultaneous “altars” with performers evoking aspects of mythical feminine energy not typically considered appropriate for church, such as eroticism and anger.

“We’re harkening back to the time when the church was more comfortable with embracing the feminine strength and power within it,” she said.

“We have three very different celebrants at these three altars, and none of their gender is simple, but all of them are in some kind of feminine register,” Powell explained. Two performers – one male and one female – are dressed as Dorothy from “The Wizard of Oz,” but with very different takes on the female archetype. While one happily offers up sparkling wine and chocolate to the viewer in a consecration-like ritual, the other malevolently thrusts wrappers or other food-related trash into the viewer’s hand, symbolizing the opposite of the Eucharist: an empty vessel. 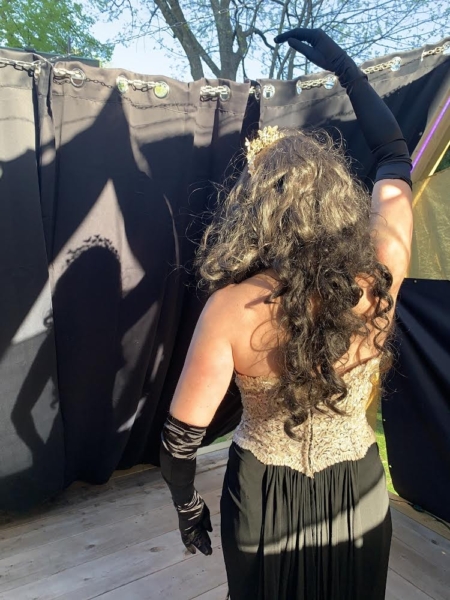 At another station, the audience is invited into a tent, where a woman dancing seductively exchanges the trash for a piece of paper with a spiritual quote written on it. The exchange, Cairns said, makes the audience member an active participant rather than a spectator.

“For a lot of churchgoers, I think that the Eucharist is very passive, that the priest is the one doing the work, all I do is receive and walk away,” Cairns said. “What if it’s more about what you bring to the table, what you give? I hope and believe that what we’ve done over the last two weekends has given a lot to people, but I know for sure that they have given a lot to us.”

Using a grant from the Diocese of Massachusetts’ young adult ministry network, Powell commissioned composer Adam Jacob Simon to write original music, including a Mass setting, that reflected the progression through the space and added an overall atmospheric tone.

For a set, the team took advantage of chaplaincy’s backyard, where plans were already underway to build a neon-lit “prayer tent” art installation and worship space. So when COVID-19 hit, there wasn’t much that needed to be changed. They had even been planning to hand out Mardi Gras-type face masks to attendees before the pandemic made masks a necessity. 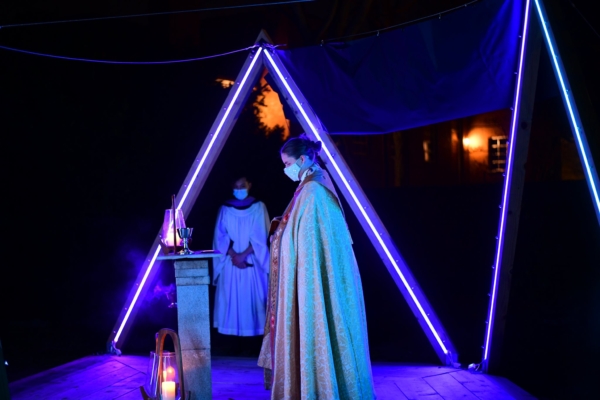 “It was very fortuitous that this piece was ready for the situation of the world,” Cairns said. “It was one of the few art projects that didn’t get canceled when the pandemic came along.”

After the performance, attendees were invited to rest in the garden and write down reflections in a book. The creative team was surprised by the variety of responses, including many that expressed discomfort or confusion but also insight. They also heard from attendees that they were simply excited that something like this was being offered. People walking by were even lured in by the smells and sounds, Cairns said.

“It seems like folks were ready for some type of artistic experience, some type of embodied experience that was COVID-conscious and accessible to them,” Wade told ENS.

Though this round of performances is over, “LadyMass” is not, the team said.

“We had a filmmaker come and work with us on filming it, and she’s working on putting something together over the summer that Rita and Kirsten will take on the road in the fall, so that folks who weren’t able to come experience it in person have still some way to access the experience,” Wade said.

“The piece isn’t over,” Cairns said. “Like an insect, it’s gone through one stage of its form, and now it’s going to transform into something else.”