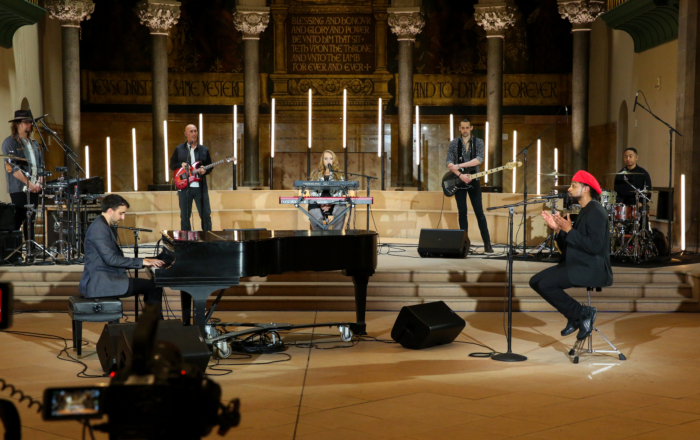 Kory Caudill (left, at piano) and Wordsmith (right, at microphone) perform during the prerecorded Concert for the Human Family in April 2021 at Philadelphia Episcopal Cathedral. Photo: The Episcopal Church

[Episcopal News Service] The Episcopal Church’s upcoming Concert for the Human Family seeks to unify people across boundaries at the intersection of faith, art and justice. Though planning for the concert was underway well before the COVID-19 pandemic, the 2020 election and the racial reckoning that followed George Floyd’s murder, its themes of connecting across difference and healing through storytelling have only become more relevant.

“We know music and stories have the power to open us and connect us more deeply than a speech or book might,” the Rev. Stephanie Spellers, the presiding bishop’s canon for evangelism, reconciliation and stewardship of creation, told Episcopal News Service. “We hope this experience will move us into transformative action.”

The first concert in the series will stream online for free at 6 p.m. Eastern time on May 22. Filmed in April with COVID-safe protocols at Philadelphia Episcopal Cathedral, the concert includes performances by Kory Caudill, a pianist from Nashville, Tennessee, who has partnered with The Episcopal Church to design the series, and featured artist Wordsmith, a rapper from Baltimore, Maryland.

[fvplayer id=”3″] The Concert for the Human Family series was developed alongside the church’s Becoming Beloved Community initiative, which focuses on the work of racial reconciliation within and beyond the church. The concert series brings together musicians from different backgrounds and genres who have unique personal perspectives to offer.

The May 22 concert takes place on the second day of a larger three-day churchwide event, “One in the Spirit: Pentecost Way of Love Revival Weekend,” that coincides with Pentecost.

“Pentecost is the season when we celebrate the birth of the church and the Spirit landing on the glorious diversity of God’s people,” Presiding Bishop Michael Curry said in a press release. “Thanks to vaccinations and CDC recommendations, it’s also the moment when lots of our churches can finally open their arms more fully to the public. We want to mark this moment of renewal with a revival and pray that God would rain blessing, guidance and power down on all people.”

The churchwide virtual revival begins on May 21 at 8 p.m. Eastern time with Washington National Cathedral’s Vigil of Hope, continues with the Concert for the Human Family on the 22nd, and wraps up with a virtual Pentecost Way of Love Revival worship service on May 23 at 4 p.m. EDT. The Sunday service will feature the testimonies, songs and voices of Episcopalians in cathedrals and communities across the church, including St. Mark’s Cathedral in Seattle, Washington, Indigenous churches in Navajoland and South Dakota, Philadelphia Episcopal Cathedral, Washington National Cathedral and Christ Church in St. Louis, Missouri.

The concert will showcase the collaboration between Caudill and Wordsmith, which yielded a collection of songs transcending the boundaries of genre, geography and race. Ranging from lighthearted to heavy, their songs cover topics from the racial profiling Wordsmith has experienced as a Black man to the rural beauty of Caudill’s native Appalachia.

Wordsmith told ENS he appreciated the project’s candid approach, in which touchy topics were not off-limits and open, honest conversations were encouraged. He hopes the concert has the same effect on the audience. 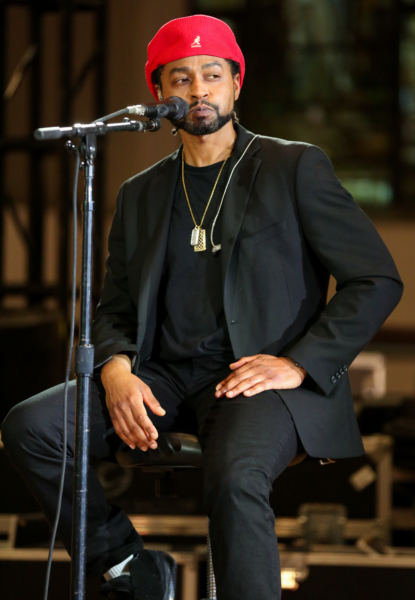 Wordsmith during the recording of the Concert for the Human Family in April 2021 at Philadelphia Episcopal Cathedral. Photo: The Episcopal Church

“We’ve been talking about the struggles we’ve been going through, talking about the divide that we have in America, and just really putting these things out here bluntly so we can have this conversation through music,” Wordsmith said. “I feel this concert will really continue to open people’s eyes, continue to keep the discussions alive on so many topics in this world that we have to address. And that’s my biggest hope, that more people will come together and unite over this.”

“The whole thing is designed to spark conversations and to strengthen communities and hopefully open up an important dialogue between all of us,” Caudill told ENS.

“Everything has been based on very real and very deep conversations and research that we’ve had with folks” going back several years, he said; though they sound tailor-made to the 2020-21 period of racial reckoning, almost all of the songs were written before the murder of George Floyd last May. One deals with the 2005 racially motivated murder of Anthony Walker in England, which Caudill learned about in detail on a trip to Liverpool with a team from The Episcopal Church in 2019.

As difficult as it is to talk about such painful topics, Wordsmith said he found it healing to help other people understand them.

“Everything we’ve seen with George Floyd, Breonna Taylor and so many others – we just want other communities to understand our plight understand what we’re going through and be willing to learn.”

Caudill and Wordsmith said they strove to make music that can transcend spiritual traditions as well as personal backgrounds. While The Episcopal Church is sponsoring the concert series, the music is broadly spiritual rather than overtly religious, inviting people of other faiths or no faith to engage with it.

“It’s important to me that people know that I’m a person of faith,” Caudill told ENS. “At the same time, I want them to know that if they’re having conversation with me, I want to learn about and understand why they view the world the way they do, and to feel welcome to have any kind of conversation they want.” 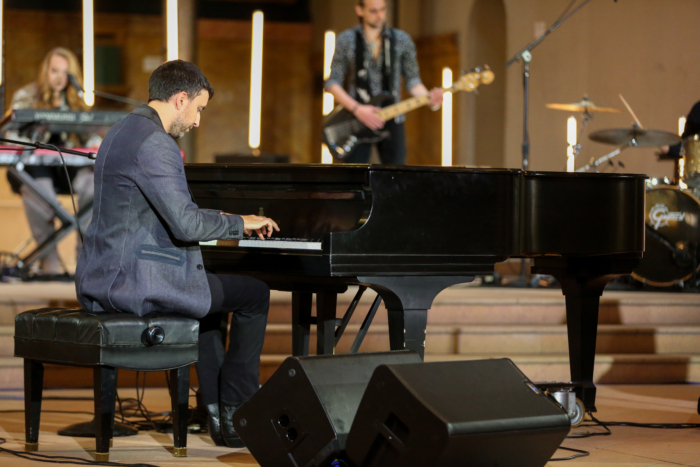 Kory Caudill plays piano during the recording of the Concert for the Human Family in April 2021 at Philadelphia Episcopal Cathedral. Photo: The Episcopal Church

Wordsmith, who is not a churchgoer, told ENS he felt welcome to speak about faith on his own terms.

“That’s been a beautiful thing of working with Episcopal churches: I’ve never been judged at all,” he said. “It was really about ‘We want you to tell your story. We want you to feel open in this world.’”

The May 22 concert will incorporate the church’s From Many, One project that fosters conversation and storytelling across differences; through a series of questions and dialogue prompts, people of different backgrounds are encouraged to seek out common ground and understand each other’s motivations.

“The whole concert is about inspiring and equipping us to live as the whole human family of God, so story sharing is woven throughout the experience,” Spellers told ENS. “The concert begins with a From Many, One conversation between two of the musicians, sharing about what they love, what they’ve lost, where they hurt, and what they dream, all from their very different perspectives and life experiences. These are the stories and dreams that informed much of the music you’ll hear, so it’s wonderful to have the event open this way.”

“The concert ends with Bishop Curry inviting the audience to try a brief conversation across difference on Zoom for themselves. You go from being a mere listener to being a participant,” she added.

Click here for updates on future concerts in the Concert for the Human Family series, including in-person events anticipated in the fall.