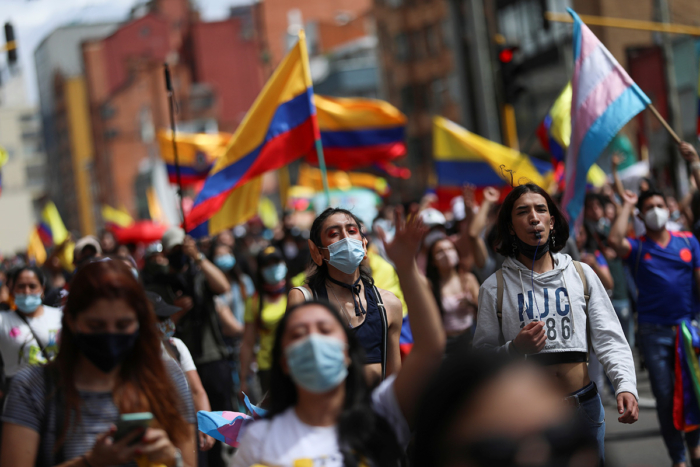 [Episcopal News Service] Episcopal leaders are calling for an end to violence and for the protection of Colombians’ civil rights after more than two weeks of political protests in the South American country have been met by a deadly national police crackdown.

Colombia Bishop Francisco José Duque Gómez issued a written statement expressing “solidarity with the suffering of the Colombia people” while affirming the church’s stance “on the side of the oppressed and violated.”

“We demand of our leaders that the necessary actions be taken and conducive to the reestablishment of harmonious relations,” Duque said. “We urge you … to respect life, integrity and the right to protest, guaranteeing the safety and protection of each and every one who expresses their just claims.”

The Diocese of Colombia is one of the seven Latin American dioceses that make up The Episcopal Church’s Province IX. Presiding Bishop Michael Curry spoke to Duque on May 14 and followed up by releasing a video statement on the unrest.

“We who follow the way of Jesus — we who seek to be the Jesus Movement in our time — stand in solidarity with those who are protesting peacefully and who work and labor faithfully for justice and humane solutions to our problems,” Curry said. “We pray and ask that all people of goodwill join hands and work together for the realization of peace, the establishment of justice and the way of reconciliation of love and life for all the people of Colombia. We stand with you in your struggle and pray God’s blessing and guidance on you and on the entire human family.”

The protests began April 28 in response to a government proposal to increase tax revenue despite the economic hardships many Colombians have suffered, especially over the past year during the coronavirus pandemic. Demonstrations erupted in the capital of Bogotá and spread to other cities, with the unrest growing particularly intense in Cali, southwest of the capital. Although Colombia’s leaders backed away from their tax proposals, the protests haven’t abated and instead expanded to include calls for police reforms. The violent crackdown on the protests has further fueled those calls.

At least 42 people are reported to have died and dozens more suffered injuries amid clashes between protesters and security forces. Human rights groups have highlighted the use of tear gas by police, with some reports of officers firing live ammunition against protesters. Some protesters have responded by attacking police stations and injuring officers.

In addition to the bishop’s statement, the Diocese of Colombia issued a seven-point response to the unrest that called for justice, underscored laws protecting the right to peacefully protest and rejected violence of all kinds on both sides. The diocesan response includes a call to “days of prayer” in the Episcopal parishes and missions across Colombia.

“We express our solidarity with our brothers and sisters who have most suffered from the effects of the pandemic, for all those who have suffered the effects of violence in these days of protest, for those who continue to stand firm in their purpose of protest and political favoritisms, cooperate in a decisive way with the citizenry that only seeks a model of society based in justice, liberty and respect for their rights,” the diocesan statement concludes.

“We have such large constituencies of Colombian clergy in the U.S. We also have a lot of Colombian members in our congregations. They are concerned about what’s going on in their [native] country,” the Rev. Anthony Guillén, missioner of Latino/Hispanic ministries, told ENS by phone. “And we have many relationships with clergy in the Diocese of Colombia. … What affects them affects us, and we’re all in this together.”

The evening devotional time is led by clergy and lay leaders in Colombia, including Duque, as well as Episcopalians and Anglicans living in other parts of the world.

“The prayers resonate the concerns with what is happening in their communities,” the Rev. Glenda McQueen told ENS. She is the officer for Latin America and the Caribbean in The Episcopal Church’s Global Partnerships Office. “The prayers provide a time to express our solidarity as the people of God. No matter where we are, we can all pray for peace in Colombia.”