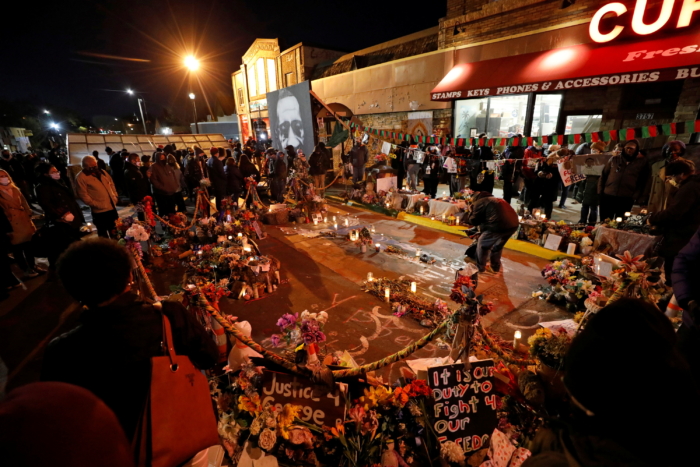 [Episcopal News Service] A group of bishops, including Presiding Bishop Michael Curry, will hold a virtual memorial service to mark the first anniversary of the murder of George Floyd on May 25. The multi-diocesan effort will include prerecorded liturgy, messages and music, including a prayer of lament filmed in George Floyd Square in Minneapolis, Minnesota, where then-police officer Derek Chauvin killed Floyd by kneeling on his neck for over 9 minutes on May 25, 2020.

The service is intended to honor the memory of Floyd as an individual, but also as one of many people of color who have been killed by police in the United States, and also to honor the national movement to end police brutality and systemic racism.

Curry will offer a reflection during the service, which will be led by Minnesota Bishop Craig Loya, Missouri Bishop Deon Johnson, Michigan Bishop Bonnie Perry, Indianapolis Bishop Jennifer Baskerville-Burrows, Washington Bishop Mariann Budde and Colorado Bishop Kym Lucas. The service will air at 8 p.m. Eastern time on the Facebook pages of those dioceses, as well as the pages of other dioceses and seminaries that are participating by submitting videos of prayers or meditations that will be incorporated into the service.

“The renewed movement for racial justice and healing that began in the streets of Minneapolis after the murder of George Floyd, and quickly spread throughout the country and around the world, has inspired a deeper awakening to the ways systemic racism form the very foundations of the institutions they make up our common life, including our church,” said Loya in a press release. “That movement and awakening is the work of the Holy Spirit, and if we are to be faithful as followers of Jesus, we are called to use our whole lives to join the Spirit in this work.”

The service will include a candle-lit “act of remembrance” from Ferguson, Missouri, where the 2014 killing of Michael Brown initiated a movement against police violence that spread across the country and heightened awareness and advocacy in The Episcopal Church. It will also feature a 9-minute and 29-second video – the length of time that Chauvin knelt on Floyd’s neck – created by the Rev. Kevin Goodman, a former television producer who is interim rector of All Saints Episcopal Church in Western Springs, Illinois, according to event details.

“My hope for this service is that we might mark the anniversary of George Floyd’s murder nationally, and then be motivated to act locally, addressing issues of systemic racism in our own unique contexts,” Perry said in a press release. “I believe we can use this moment to create a movement in The Episcopal Church and beyond, enabling The Episcopal Church to be a force partnering with secular organizations already involved in this work, using powerful liturgy to lead people to meaningful action.”

Episcopalians have long been involved in the struggle for racial justice, and especially in the push to end police violence since Floyd’s murder, as Curry noted during a virtual Compline service on April 20 after Chauvin was found guilty.

“You have been faithful through this journey, and many of you have marched and virtually all of you have prayed and you have stayed the course,” Curry said, adding that “there is work yet to be done.”