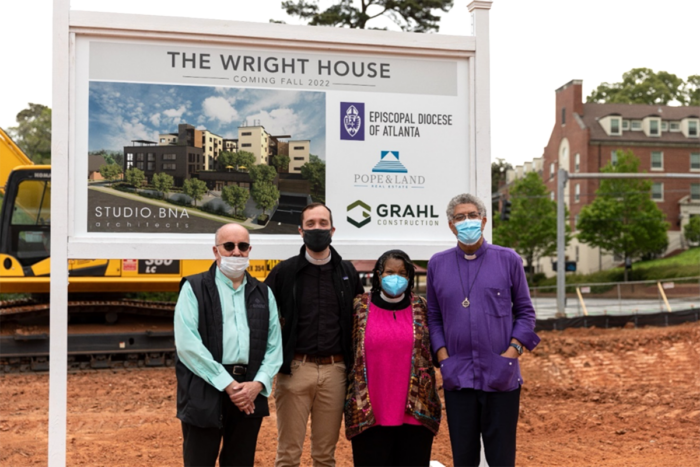 [Episcopal News Service] The Episcopal campus ministry at the University of Georgia in Athens is undergoing a dramatic transformation, and the disruptions caused by the pandemic are only part of the story.

In March, the Diocese of Atlanta demolished a church building at the center of the campus that had housed the Episcopal Center, though Episcopal students hadn’t gathered or worshipped in the building since the first surge in COVID-19 cases a year earlier. In place of the church, construction is underway on a new residential building, which the diocese is touting as an innovative “live, study, pray” approach to student housing.

The building will be named the Wright House after Atlanta Bishop Robert Wright, in recognition of “his steadfast support for children, youth, and college ministries,” according to a news release. It will have 123 student bedrooms across four above-ground stories and plans to welcome students of all faith backgrounds starting in fall 2022. Amenities will include a roof deck, a fitness facility, a coffee bar, study areas, shared kitchen space and on-site parking. An expanded, multiuse chapel space will accommodate the diocese’s growing campus ministry while also serving as a kind of community center for the building’s residents.

The Rev. Clayton Harrington, the diocese’s campus missioner for the past three years, will move into the building’s separate chaplain’s residence when it opens, making him more available to students, especially those seeking pastoral care.

“If you talk to students, they will tell you being a student is stressful,” Harrington told Episcopal News Service. Basing a chaplain in the building adds “another layer of support where they know that if they are in crisis, there is somebody present that can help.”

The development broke ground in April at a ceremonial event attended by Wright, who called it “an amazing project and a new concept for college ministry” in a written statement released by the diocese.

Valued at $18 million, the development is being overseen by Atlanta-based Pope & Land Real Estate and by the Rev. Lang Lowrey, an Atlanta priest who specializes in guiding church development projects in dioceses across The Episcopal Church. This project was structured to provide a “moderate return” on the diocese’s investment by enlisting equity partners to share the upfront costs, Lowrey told ENS. The diocese will continue to own the property and is hiring CollegeTown Properties to oversee leasing and management.

“One of our big assets across The Episcopal Church are our college ministries,” Lowrey said, especially ministries like the one at the University of Georgia that are centrally located on campus. “It’s at the intersection of everything.”

The proximity of dining halls, freshman dorms and a bus line to the rebuilt Episcopal Center is billed as a central amenity to Episcopal students, Lowrey said, though the “live, study, pray” concept transcends religious affiliations. He called it a “community of inclusion.”

“You don’t have to be a practicing Episcopalian, but we do want you to be intentional about your studies,” he said. 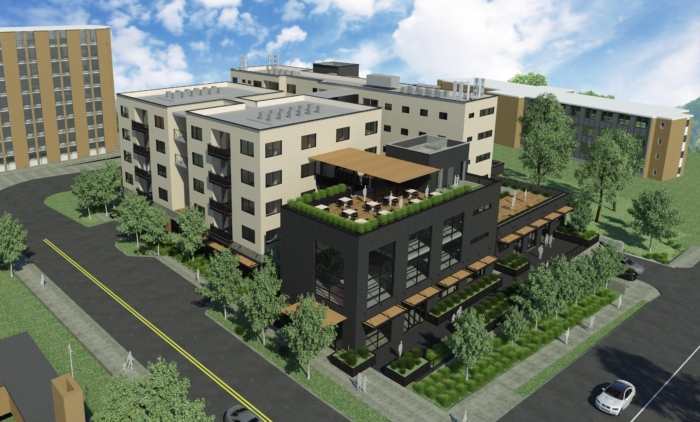 An architectural rendering shows the Wright House, which is being developed at 980 South Lumpkin Street in Athens, Georgia, at the heart of the University of Georgia campus. Photo: Diocese of Atlanta

Students’ normal study habits were upended in March 2020 when the onset of the pandemic forced colleges and universities everywhere to move classes online. The Episcopal Center’s ministry to Georgia students also moved online during the final months of the previous academic year, which “made staying connected trickier,” Harrington said.

This academic year, students returned in the fall to a hybrid learning setup, with some classes still held online. Others met in person with students and faculty following public health guidelines, like distancing and mask-wearing, to slow the spread of the coronavirus.

When Harrington took over as campus missioner in 2018, a core group of fewer than 10 students regularly attended the ministry’s community meals, worship services and formation activities. In two years, the ministry rebounded to the point that gatherings at the Episcopal Center regularly drew 30 to 35 students. Despite the pandemic’s disruptions, many of those students remain engaged with the ministry online, and they have flocked this year to the in-person services that Harrington offered outside the Episcopal Center.

After the Episcopal Center was razed, Harrington began organizing limited indoor gatherings this spring through an arrangement with the campus’ Presbyterian Center. Episcopal events will continue to be held there until the new Episcopal Center is completed. He also encourages Episcopal students to attend Sunday services at one of the two Episcopal churches in Athens: St. Gregory the Great Episcopal Church and Emmanuel Episcopal Church, at which Harrington also serves part time as associate rector.

Though reluctant to sound nostalgic, Harrington said he and the students he serves long for a return to the kinds of personal interactions and communal spaces that they had taken for granted before the pandemic. When the new Episcopal Center opens in fall 2022, “I think there will be a kind of sense of homecoming,” he said.

Lowrey declined to elaborate on details of the development’s financing, citing confidentiality agreements with the diocese’s equity partners. The diocese chose not to maximize its potential revenue from the student residences, he said, so that it could invest more in its campus ministry while also keeping rents reasonable for students. Lowrey estimated bedrooms, each with its own bathroom, could rent for up $1,200 a month, though a final rate has not yet been set. By comparison, living in a typical residence hall costs $6,292 this academic year, according to the university, while off-campus housing typically has more amenities and is more expensive.

The diocese also is developing a needs-based scholarship program to assist students who want to move into the Wright House when it is completed but who aren’t able to afford the cost.

The Episcopal students who are involved with the campus ministry responded with excitement to the announcement last month of the plans for a dynamic new building on the site of the former Episcopal Center. “It was a high note to be able to announce this at the end of a difficult year,” Harrington said.

He, too, is looking forward to moving into the new building with his 11-year-old poodle, Talya. He already has visions of celebrating Holy Eucharist in midweek evening services in the chapel and bringing in tables and chairs for regular community meals.

“Everybody’s welcome, and we don’t just say that. That actually means something,” he said.