[Episcopal News Service] Anglican congregations and ministries in the Middle East have taken a range of approaches to responding to the public health crises and economic disruptions caused by the COVID-19 pandemic over the past year, as the coronavirus continues to spread across the region. 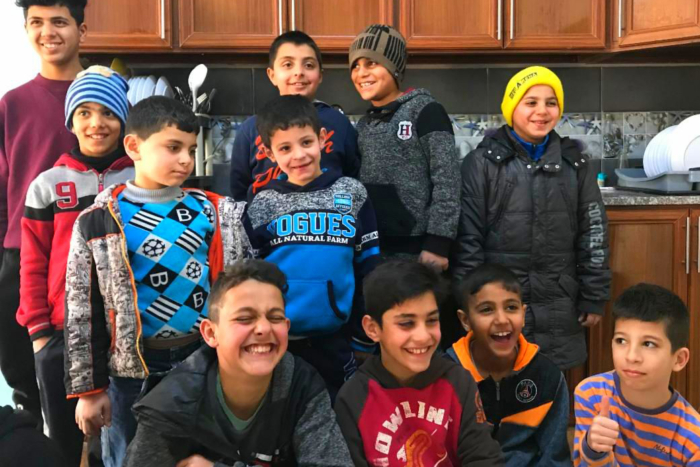 The scale and nature of the crisis varies by country, based on its economy, politics and civil conflict. In some countries, Anglican hospitals and clinics have struggled to meet patients’ needs. Leaders at Anglican schools spoke of the online educational challenges they face. And while worship services remain mostly online, demand for church-based food security and other relief ministries has increased.

“The overall economic impact has been pretty devastating, whether it’s Jordan or Palestine or Israel,” said John Lent, executive director of the American Friends of the Episcopal Diocese of Jerusalem, or AFEDJ. “And now you’ve got the challenge of getting people vaccinated.”

The Diocese of Jerusalem includes Israel, the Palestinian territories, Jordan, Syria and Lebanon, and is one of three dioceses in the Anglican province in the Middle East. The pandemic’s biggest economic disruption has been to the pilgrimage industry, which ground to a halt a year ago, Lent told Episcopal News Service.

The loss of Holy Land tourism has hit the Palestinian territories particularly hard, Lent said, and it has had a direct impact on revenues of the diocese, which operates guest houses that have remained vacant. The diocese’s schools have stayed open through remote learning, and its hospitals and clinics have continued to treat patients. AFEDJ has devoted much of its fundraising efforts to helping medical centers respond to the pandemic, by providing personal protective equipment, renovating indoor spaces to facilitate social distancing, and preparing the facilities in other ways for an increase in patients.

“I think they’ve done a really good job of keeping people safe and responding to the needs,” Lent said.

In the Palestinian territories, the tourism industry mainly is centered in Bethlehem, while the city of Ramallah, as the seat of the Palestinian National Authority, is more focused on political activity as an economic driver. In the past, some travelers to Ramallah have stayed at a guest house run by the Episcopal Technological and Vocational Training Center, where the school’s hospitality and culinary arts students, 11th- and 12th-graders, were able to gain real-world experience. The income and job-training opportunities evaporated when travel restrictions were imposed at the start of the pandemic in March 2020.

“As Palestinians, we are used to catastrophe,” Giovanni Anbar, the vocational school’s director, told ENS in a Zoom interview. He and the school’s teachers and staff members were forced to rethink their education program, moving much of it online, while following guidelines to slow the pandemic’s spread.

The students finished the previous school year with online lessons, and the experience helped educators plan for a successful new school year in the fall, he said. “We learned a lot, I would say.”

The school, though supported financially by the diocese, also draws some of its revenue from fees paid by families, some of whom were unable to pay after parents lost jobs during the initial shutdown. The school was committed to paying its teachers and staff members through the crisis, while cutting other parts of its budget, Anbar said.

The vocational school has gone into and out of distance learning over the past year. When Anbar spoke with ENS in mid-April, it was closed to in-person lessons again because of a new surge in COVID-19 cases. “It doesn’t look good in Ramallah,” he said. 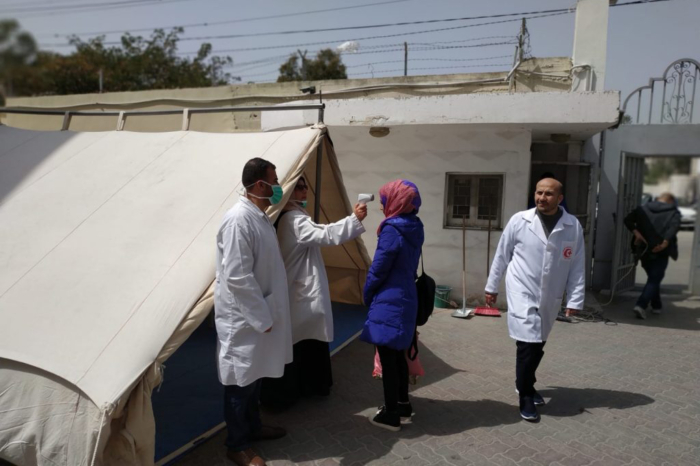 A patient is checked for fever at a triage tent at the Diocese of Jerusalem’s Ahli Arab Hospital in Gaza City in March 2020. Photo: AFEDJ

In late March, the U.S. announced it would give $15 million in COVID-19 aid to Palestinian communities in the West Bank and Gaza. Earlier this month, the Biden administration restored $235 million in aid for Palestinian refugees, reversing a Trump administration policy. The Episcopal Public Policy Network was among the groups advocating for that policy shift.

In Zarqa, Jordan, Saviour’s Episcopal School also has dealt with financial challenges during the pandemic. The commitment to school’s students, however, hasn’t wavered, Dua’a Bisharat, the school’s director, told ENS by Zoom. “We are a family,” she said.

After the government ordered a shutdown of the country in March 2020, Bisharat and the school’s teachers had to figure out how to continue providing lessons to students. They turned to a range of platforms for communicating, including a YouTube channel, Microsoft Teams and WhatsApp.

They were able to resume in-classroom learning for three weeks early this year when the government temporarily lifted restrictions – only to reimpose them when positive cases surged again. That upheaval has made it difficult to plan for the future, Bisharat said, “as if you are walking on the snow or in the mud.”

Some students and parents have died after contracting the coronavirus, she said. Vaccination efforts, however, are ramping up in Jordan. Bisharat said she received the first dose of the Pfizer vaccination and was scheduled for the second dose, and she is encouraging teachers to schedule their vaccinations. School officials are hopeful but can’t commit to a full reopening in the fall until the infection rates come down, she said.

Vaccination rollout so far has tended to favor Middle Easterners living in wealthier societies, with Israel, United Arab Emirates and Bahrain reporting some of the highest vaccination rates in the world. Israel is now recording only about a hundred new COVID-19 infections each day, and with more than 60% of Israelis vaccinated, businesses and schools have reopened.

The outlook is much different in the Palestinian territories of the West Bank and Gaza, where vaccinations are underway but not as readily available or widespread. “Most predictions are Palestinians are going to be some of the last people on the planet to get vaccinated in large enough numbers to restore something close to normal economic activity,” Lent, the AFEDJ executive director, said. “The situation there is really not encouraging.”

In oil-rich Persian Gulf countries like Bahrain, Qatar and United Arab Emirates, much of the labor force is made up of foreign workers drawn to the countries by the availability of employment in commercial development, according to the Ven. Bill Schwartz, an archdeacon in the Diocese of Cyprus and the Gulf. When those economies shut down early in the pandemic and travel was restricted, many of those workers were suddenly unemployed and unable to return to their home countries.

“Obviously, a lot of people dropped through the cracks,” Schwartz told ENS in a Zoom interview from Bahrain, though Anglican churches in the region have tried to help with food drives and other relief ministries.

Those efforts have continued despite the inability to hold in-person worship services. “Most of our churches have been on lockdown pretty much the whole year,” said Schwartz, who also serves as dean of St. Christopher’s Anglican Cathedral in Bahrain.

Different challenges face Iraq and Yemen, Schwartz said. Iraq’s economy is not as strong and lacks the development drive seen in other parts of the Gulf. Its history of political corruption has fueled large anti-government protests in recent years, with the pandemic only exacerbating the challenges facing the nation, he said.

And Yemen is a country torn apart by civil war since 2014. The pandemic is a crisis on top of an existing crisis, and the public health challenge is “mostly related to the infrastructure that’s been destroyed in the war,” Schwartz said. The conflict has devastated the health care system and has caused sporadic power outages. Clean, safe drinking water is only available every few days, he explained, asking, “How do you wash your hands if you don’t have water?”

Since there is no functioning government to lead a public health response to the pandemic in Yemen, Schwartz said, nongovernmental organizations have looked for ways to fill those needs.

The Diocese of Cyprus and the Gulf maintains the only functioning Christian church in Yemen, in the coastal city of Aden, and church leaders have offered the facility for use as a medical and eye clinic. When patients arrive, they are advised on precautions to minimize the spread of COVID-19, and the diocese received money from Episcopal Relief & Development to provide face masks and other protective equipment to Yemenis, Schwartz said.

The Episcopal Province of Jerusalem and the Middle East receives financial support each year from The Episcopal Church through the church’s annual Good Friday Offering. In recent years, the offering has topped $400,000, but proceeds were sharply diminished in 2020 because of pandemic restrictions on gathering in churches for worship, including during Holy Week.

An official total for the 2020 Good Friday Offering has not yet been released, but the Rev. Robert Edmunds, The Episcopal Church’s Middle East partnership officer, estimated it was about a quarter of the total from previous years. This year’s Good Friday Offering came as some dioceses and congregations were resuming in-person worship services.

“It’s never too late to contribute to this church-wide effort as a source of solidarity and support of our sisters and brothers of the Province of Jerusalem and the Middle East,” Edmunds said by email.

AFEDJ’s fundraising for the Diocese of Jerusalem has remained strong over the past year, Lent said. Donations from congregations were down somewhat, but individual giving was at an all-time high, he said. The organization launched another campaign in February, nearly a year after the start of the pandemic, as a reminder that help is still needed.

“We wanted to put the news out there that the region’s still really struggling,” he said. “While things are looking up here in the United States … in that part of the world, it is still a huge struggle and the financial impact of the pandemic is not over.”