[Episcopal News Service] An Episcopal delegation is participating this month in the annual United Nations conference on Indigenous issues, and because the two-week conference is limited mostly to online meetings during the pandemic, this year’s delegation is the church’s largest yet, spanning a wide geographic range.

The 20th meeting of the U.N. Permanent Forum on Indigenous Issues runs from April 19 to 30. The 12-person Episcopal delegation to the conference is led by the Rev. Brad Hauff, The Episcopal Church’s missioner for Indigenous ministries, and joined by Lynnaia Main, the church’s representative to the United Nations. 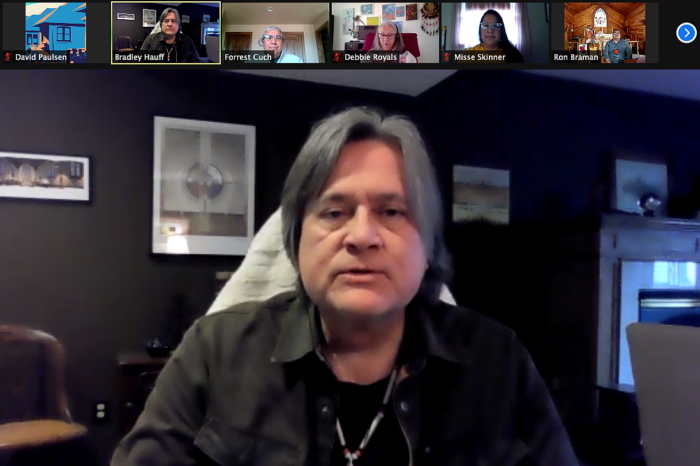 The Rev. Brad Hauff, The Episcopal Church’s missioner for Indigenous ministries, leads a presentation on the Doctrine of Discovery offered April 26 on Zoom by the Episcopal delegation to the United Nations Permanent Forum on Indigenous Issues.

Hauff, a member of the Oglala Sioux tribe, is participating from his home base in Minnesota, while the rest of the delegation is joining from across the United States, including from Arizona, Hawaii, Idaho, North Dakota and Tennessee. They are the Rev. Robert Two Bulls, Oglala Sioux; the Rev. Jasmine Bostock, Kanaka Maoli; Ronald Braman, Eastern Shoshone; the Rev. Tina Campbell, Navajo; Forrest Cuch, Ute; the Rev. Debbie Royals, Pascua Yaqui; Melissa Chapman Skinner, Standing Rock Sioux; the Rev. Rachel Taber-Hamilton, Shackan Band; the Rev. Bude VanDyke, Cherokee; and Caressa James, Cheyenne.

The purpose of the Permanent Forum is to allow Indigenous people to provide expert advice to global leaders through the U.N.’s Economic and Social Council, or ECOSOC, and to inform U.N. agencies working on a variety of international issues, from human rights to the environment. Participants have much to share and to learn, even in an online setting, Hauff told Episcopal News Service by phone.

“What has always struck me is the similarities or the commonalities that Indigenous peoples and communities have among each other,” Hauff said, “regardless of where they are in the world, whatever continent they’re living on, the issues are very similar if not practically identical to one another.”

The Permanent Forum on Indigenous Issues was formed by U.N. resolution in 2000 to focus on Indigenous issues related to economic and social development, culture, the environment, education, health and human rights. Its first meeting was held in 2002.

The theme of this year’s meeting is “Peace, Justice and Strong Institutions,” emphasizing Indigenous peoples role in implementing the United Nation’s Sustainable Development Goal No. 16.

U.N. member states adopted the Sustainable Development Goals in 2015. They were intended as “a shared blueprint for peace and prosperity for people and the planet,” with a target of achieving the 17 goals by 2030. The Episcopal Church’s General Convention voted in 2018 to endorse the goals and to use them as “the basis of development policy and action of the Episcopal Church in its institutions, dioceses, and congregations.”

Goal No. 16 is to “promote peaceful and inclusive societies for sustainable development, provide access to justice for all and build effective, accountable and inclusive institutions at all levels.”

Because The Episcopal Church is an ECOSOC-accredited nongovernmental organization, the Episcopal delegation was able to submit an official statement to this year’s Permanent Forum, as it has at past meetings.

“For Indigenous people, it is impossible to talk about sustainable development without acknowledging the sacred spiritual connection between our Creator and all that is created,” the delegation said in its written statement in support of the Sustainable Development Goal. “When we honor this connection there is peace and harmony. When this connection is dishonored, we see all of humanity’s eventual destruction through abuse of the land, air, water.”

Before the pandemic, the Permanent Forum meetings were held at the U.N. headquarters in New York with full-day sessions in addition to side events, some organized by the Episcopal delegations. This year, the primary daily sessions have been limited to two hours and livestreamed on the United Nation’s website.

U.N. Secretary-General António Guterres alluded to the pandemic’s impact in his opening remarks on April 19. “Indigenous peoples have been particularly hard hit by the COVID-19 pandemic,” Guterres said. “An already vulnerable group risks being left even further behind. The lack of participation of Indigenous peoples in decision-making has often meant their specific needs are overlooked or ignored. As we work to recover from the pandemic, we must prioritize inclusion and sustainable development that protects and benefits all people.”

After each morning session, side events are held throughout the day, often via Zoom. Episcopal delegates are attending separate events, and at the end of each day, they come together for a debriefing about what they heard, learned and shared.

The Episcopal Church has made a deliberate effort in recent decades to welcome Native Episcopalians into fuller participation in the church and to atone for its role in past injustices. In the 1800s, Episcopal missionaries ministered to American Indian tribes, but conversion to Christianity typically required leaving Native spirituality behind.

General Convention resolutions at least since the 1970s sought to support Native American land claims and human rights. And in 2009, General Convention repudiated the Doctrine of Discovery, rooted in documents dating to the 15th century that purported to give Christian explorers the right to claim lands they “discovered” and to oppress and convert the people they encountered.

The Episcopal delegation organized a presentation April 26 about the Doctrine of Discovery that was open to all participants in the Permanent Forum. About three dozen people attended the presentation on Zoom, with Hauff offering an introduction about The Episcopal Church’s history of complicity with systems of oppression against Native Americans.

At one point, he showed a photo of Native American children attending boarding schools where they were “forcibly assimilated into the American culture of the dominant society,” Hauff said. Some such schools were run by Episcopal leaders, including the school attended by Hauff’s own mother. The schools have since been condemned for their role in eroding Native cultural traditions.

“It was an act of colonization,” he said.

VanDyke, one of the other members of the Episcopal delegation, is a priest based in Sewanee, Tennessee. “Every time I get into a conversation about the Doctrine of Discovery, it hurts my heart,” he told the group gathered on Zoom. “It hurts my heart because the church I love not only historically participated in it, but in its own ways, known and maybe unknown, it still does.”

Taber-Hamilton, who serves as rector at Trinity Episcopal Church in Everett, Washington, spoke of the Doctrine of Discovery being a factor in how Indigenous peoples are treated in every province of the Anglican Communion.

“Wherever there are Indigenous people, there is the experience of culture loss, of identity loss, of challenges constantly to even being federally recognized,” Taber-Hamilton said. “So when communities of faith are committed to doing the work of reconciliation … to appreciate the impact of the Doctrine of Discovery on those relationships requires a tremendous sensitivity.”