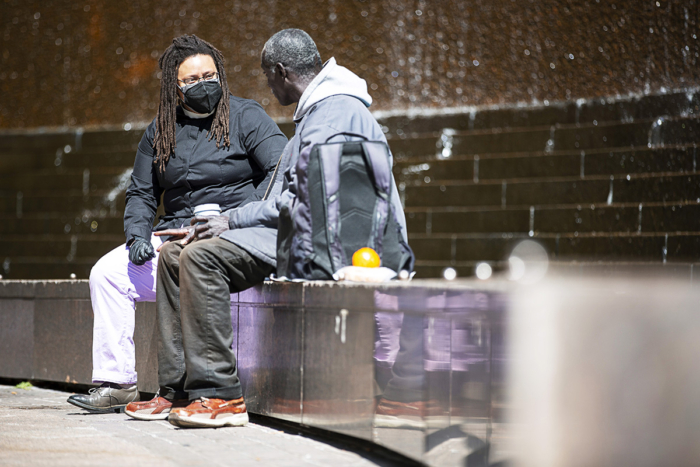 The Rev Kim Jackson, vicar of the Church of the Common Ground in Atlanta, counsels a homeless man in early March at Woodruff Park. The park is a few blocks away from the Georgia State Capitol, where Jackson serves as a state senator. Photo: Allison Shirreffs

[Episcopal News Service] When the Rev. Kim Jackson recently addressed her 55 peers from the well of the Georgia Senate, she did so as an Episcopal priest elected as Georgia’s first openly LGBTQ state senator.

“I want to be honest in saying that being Black and lesbian in the Georgia State Senate feels scary,” Jackson told Episcopal News Service in an interview in early March. “I’ve always been out as a priest, but here it kind of feels like I’m walking a careful tightrope to not upset the status quo.”

Atlanta Bishop Rob Wright recently talked to the Rev. Kim Jackson, who also serves in the Georgia Senate, about the legislature’s recent passage of one of the nation’s most restrictive voting laws.

Listen to the episode here.

Jackson spoke from the Georgia Senate floor on March 25, just hours before the governor signed one of the nation’s most restrictive voting laws, criminalizing offers of food or drink to voters waiting in line, requiring stricter voter identification and strengthening legislators’ oversight of elections. She raised her voice against it.

“I, as a Southerner, as a pastor and as someone who cares for my neighbor, just cannot understand [that] we have made it illegal — illegal! — for someone to pass out some food … or water or an extra chair to someone while they’re sitting in a long line in the Georgia heat,” she said, her tone rising, her cadence and gestures quickening during the 5-minute speech, calling out the legislation’s potential impact on disabled people.

“I want to be clear that this bill has ignored the pleas and the needs of those who are living with disabilities in this community,” she said. “We owe it to people who are already struggling to do all we can to make voting easier for them — never harder.” 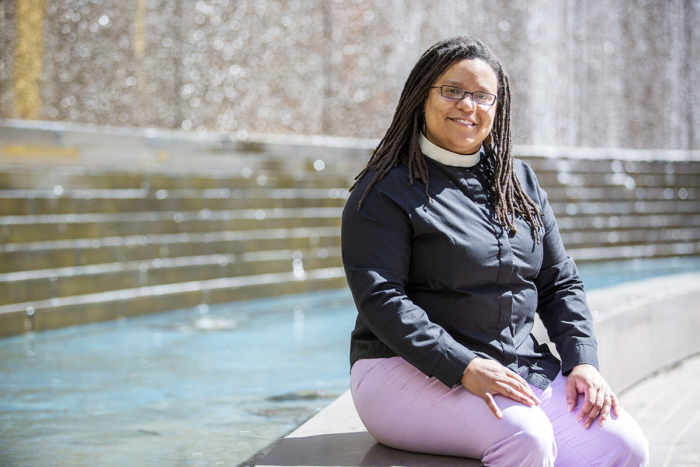 In November 2020, the Rev. Kim Jackson made history when she was the first LGBTQ person elected to the Georgia Senate. Photo: Allison Shirreffs

Jackson’s career has centered on fidelity to Jesus and speaking truth to power: the first led to ordination in 2010; the second to elected office in 2020 in Stone Mountain, an increasingly multicultural Atlanta suburb where, a century earlier, the Ku Klux Klan had reignited its base.

On the day Georgia made national headlines for enacting new voting restrictions, Jackson celebrated her first legislative victory. The Senate passed a bill she introduced that would increase protection for victims of stalking.

“I want to offer legislation that matters, not something that makes the pecan the state nut,” she told ENS. “This could save someone’s life.”

That day, Jackson shared the news with her godmother, the Rev. Melana Nelson-Amaker, rector of St. Christopher’s Episcopal Church in New Carrollton, Maryland.

“This is Kim: She thinks about the things that other people don’t and uses her position and influence to make a good and constructive difference,” Nelson-Amaker said, reflecting on their conversation. “The [anti-stalking] legislation that she got passed reflects that she thinks of people on the fringes or those forgotten, and she has for a long time.”

In her elected service, Jackson expresses a Jesus-centered approach to caring for the needs of others. The outlook comes from years of advocacy and pastoral care for vulnerable and neglected people. 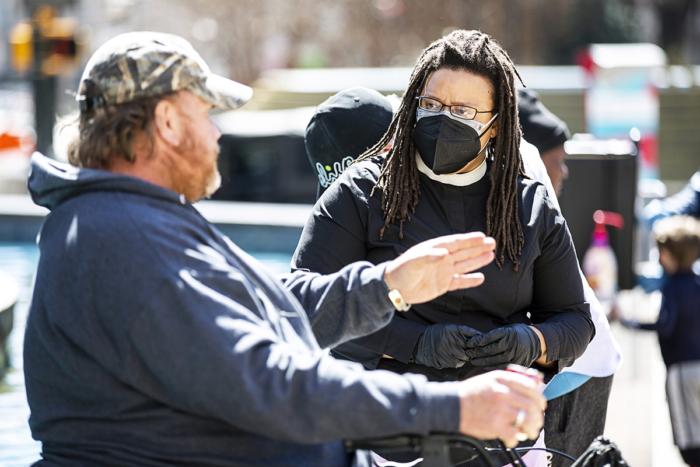 The Rev. Kim Jackson serves both in the Georgia Senate and as vicar of the Church of the Common Ground, an Atlanta street ministry. Photo: Allison Shirreffs

She remains vicar of the Church of the Common Ground, and her parishioners inspire urgency in her legislative work. They mostly live outdoors on the streets of downtown Atlanta, in tents under the freeways or sometimes in homeless shelters.

“Now that I’m on the inside [of government], I see how hard it is to affect positive change for them,” Jackson said. Putting the work in perspective, she added: “Every extra day that it takes to expand Medicaid is another day that a parishioner will not have insurance.”

Jackson has worked on legislation to expand automatic expungement of felonies, which would help parishioners like Frank Torres and others. “There are a lot of us out here, and the love of God that she gives is always a good message,” he said.

She operates her street ministry on a first-name basis and focuses on meeting parishioners’ basic needs for food, clothing and health care. On a Sunday in early March, they gathered at their regular location, Woodruff Park near the State Capitol.

“Sometimes it’s 30 degrees, windy and rainy, and no one is in a good mood,” said seminarian Zach Plants, who earns degree credit by serving with Jackson. “She comes in and everything shifts.”

Parish administrator Matt Johnson recalled one cold February morning when Jackson took a Senate break to visit homeless people gathered outside historic Central Presbyterian Church opposite the Capitol. “One man walked up to her barefoot, and his toenail was three inches long,” Johnson recalled. “Kim spent 45 minutes taking care of his feet.”

Her inclination to see the good in everyone was nurtured in Cowpens, South Carolina, population approximately 2,000, located 185 miles northeast of Atlanta. “Kim has small-town relational chops,” Atlanta Bishop Robert Wright told ENS. “She’s also got a big-city, get-things-done sensibility too.”

Wright and Jackson met in 2006 when she moved to Atlanta with a Furman University history degree and “good trouble” mindset. She joined St. Paul’s Episcopal Church, established in 1880 as one of the oldest Black Episcopal parishes in the country, where Wright was rector.

“Kim pays attention to the gaps where we as a society don’t live up to our word or have chosen to do something else,” Wright said. “She stands now in the proud tradition of pastors and priests who worked in the world and reported to the church on Sunday. Dr. Martin Luther King Jr. did that. Raphael Warnock does that. Pauli Murray did that.” 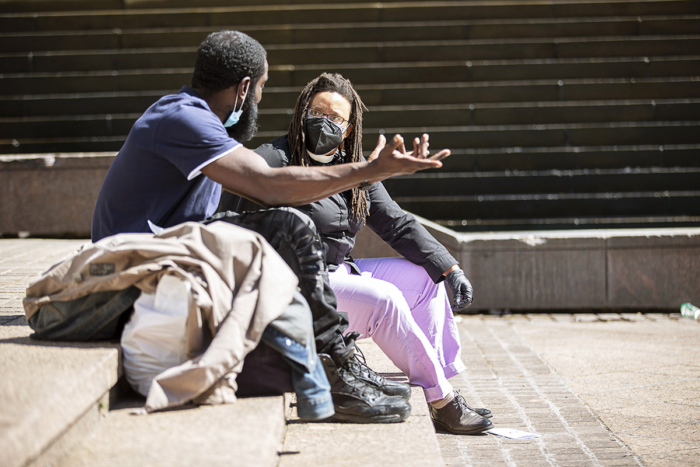 The Rev. Kim Jackson’s work with homeless people on the streets of Atlanta informs her legislative work in the Georgia Senate. Photo: Photo: Allison Shirreffs

St. Paul’s sponsored Jackson for ordination, paying her tuition and living expenses at Virginia Theological Seminary. After graduating and returning to Atlanta, she was ordained a deacon in 2009 and became the Diocese of Atlanta’s first Black openly LGBTQ priest in 2010. She brought advocacy to her first job as priest in 2010 at the nearby Atlanta University Center Consortium, an association of four historically Black colleges and universities. At an early March gathering in the park, Jackson had an unexpected, lengthy conversation with a former AUCC student who had become homeless. “He wanted to pray for me, which doesn’t happen every day,” Jackson said. “He pulled up an app on his phone and prayed that my faith would remain strong.”

When she became associate rector for formation at All Saints’ in Atlanta, she continued her political activism. Several parishioners who serve in the Georgia Legislature became early supporters of her Senate campaign.

“She is a rising star,” Georgia Rep. Mary Margaret Oliver, a cradle Episcopalian and lifelong All Saints’ member, told ENS on March 25. “We’ve always had ministers serving in the Legislature, but never an Episcopal minister. With the uneasiness and anger around the voting bill here today, I am glad for her presence.”

Georgia’s General Assembly operates with set Christian rituals. Each day, a chaplain opens the session with remarks and leads the Pledge of Allegiance, and lawmakers typically open committee meetings with prayer. As two-term Rep. Matthew Wilson, an All Saints’ member, said, “On Sunday mornings, I am tempted to roll over and go back to sleep because I’ve already had five days of church.”

Jackson said she struggles to understand the General Assembly’s adherence to Christian practices as lawmakers pass bills that she says further marginalize Georgia residents who live in poverty, which is 13% of the state’s 10 million people. “Showing a different way of being a Christian is needed,” she said. “I follow a Jesus who gave free health care.”

Jackson invoked the Gospel story of Jesus’ healing the sick at Bethesda to encourage senators’ support of Medicaid expansion. “The federal government is troubling the waters,” she told them. “We need to get in the pool.”

Jackson’s work on the anti-stalking bill impressed Marina Sampanes Peed, a 30-year advocate for the protection of women and children in Georgia.

“Some people here use their view of God and religion to limit rights and care for all people, and I think they have lost or hijacked their faith for power and control,” Peed, the executive director of Mosaic Georgia, said. “Kim comes from the true words of Jesus to love your neighbor as yourself.”

Wilson said Jackson’s voice is reaching the audience who needs to hear it “because the most hateful legislation originates in the Senate,” he said. “It takes a lot of work and time to change hearts and minds, and Kim is very much doing that by speaking to her life and experience. If you can change one mind, you are one step closer to changing the law.”

Jackson said she tries to see “the ‘God-spark’ in everybody.”

“But listening to white men very smugly say that they are doing the right thing by creating obstacles to voting in Georgia — that makes it very difficult to see anything about God in them,” she said.

That struggle is familiar for Oliver, an elected legislator for 27 years. The Micah 6:8 command to “do justice, love kindness and walk humbly” sustains her, she said, but humility is rare in a swing state where power is becoming more contested. “When you can win with a 100% partisan vote, you think you are right and that skews humility. I think Kim represents humility.”

Jackson and her wife share a 5-acre farm in Stone Mountain, with six goats, 18 ducks, 35 chickens, several dogs and cats, and bees.

“Here I am just the person cleaning droppings from a coop,” Jackson said of her home. Beekeeping forces her to “still her heart” and breathe deeply. “If I come to the hive anxious or tightly wound, the bees do not respond well.”

Jackson views herself as a legacy of the Rev. Pauli Murray, the first African American woman ordained an Episcopal priest. Murray, who was also queer, died a year after Jackson was born; Murray bequeathed her vestments to Nelson-Amaker, who cared for Murray at the end of her life.

Jackson wore a kente stole of Murray’s to her Senate swearing-in. “The most beautiful one,” Nelson-Amaker said.

“[Murray] was willing to use all her different gifts in the service of God and people,” Nelson-Amaker said. “Kim has this broad and deep sense of serving God however you can, with whatever gifts you have been given.”

“I very much feel that Pauli Murray is in the cloud of witnesses,” Jackson said. “I do not do this work alone. More than anything, she gives me the courage to keep coming back to this work.”

– Michelle Hiskey is a freelance writer in Decatur, Georgia, and is a member of St. Bartholomew’s Episcopal Church.