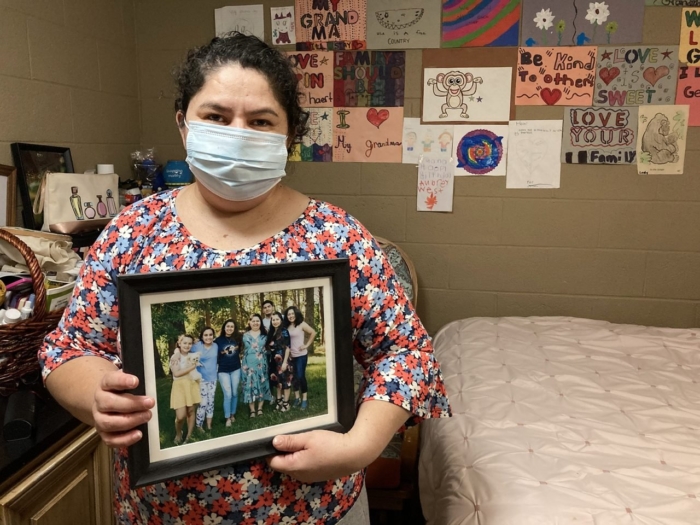 Ortega, 48, is the latest undocumented immigrant to emerge from the network of U.S. churches that harbored people threatened with deportation by the Trump administration. Her Greensboro lawyer secured her a “stay of removal” from Immigration and Customs Enforcement. She expects to get a work permit in the next few days.

A mother of four and a grandmother of three, Ortega took refuge at St. Barnabas Episcopal Church on May 31, 2017, after being ordered to leave the country. She is a native of Guatemala but has lived in the United States for 28 years, most of them in the North Carolina town of Asheboro, about 30 miles from Greensboro. Her husband, Carlos, is an American citizen.

“She has a stay and it can be renewed yearly,” said the Rev. Randall Keeney, vicar of St. Barnabas Episcopal Church, a congregation of about 100 members. “She’ll be packing and head home tonight.”

Before taking sanctuary, Ortega worked as a seamstress for a furniture company in nearby High Point. Six years ago during a raid on her employer, she was arrested for entering the country illegally and released. It was then she first realized her asylum claim was denied. Each year since, she checked in with U.S. Immigration and Customs Enforcement and received a one-year stay of deportation — until in 2017, when for no stated reason she was given 30 days to leave the country.

Houses of worship are considered “sensitive locations,” meaning federal immigration enforcement officers will avoid arresting, searching or interviewing people there under most circumstances.

Ortega was the first person to seek church sanctuary in North Carolina and she is the last to leave. Two years ago, a 25-minute documentary about her struggle to remain in the U.S., titled “Santuario,” aired on PBS.

Ortega was busy greeting church members who came to congratulate her on her freedom Monday and was not able to talk.

Since the inauguration of President Joe Biden, dozens of undocumented immigrants who had been living in churches across the country have been granted temporary relief from deportation by ICE.

At St. Barnabas, a vesting room was cleared and turned into a bedroom for Ortega. An adjacent nursery was transformed into a sitting room with a couch and a desk. The church had two bathrooms, one for men and one for women, but no shower. Ortega’s son-in-law, a plumber, installed a shower in one of them, and the other was turned into a unisex bathroom.

During her stay, Ortega outfitted her small quarters with three sewing machines and sewed pillows, bags, aprons and lately masks. She also loved to cook pupusas, a thick griddle cake or flatbread, in the church kitchen for members of her own Pentecostal church back in Asheboro.

While in sanctuary, Ortega was forced to miss her son Carlos’ high school graduation as well as the birth of her third grandchild. But her family visited often and stayed with her on many nights. Recently, they brought her a small chihuahua mix to live with her; she called it “baby.”

“It’s not hard to become attached to Juana,” said Keeney. “She’s so loving and graceful and courageous. She has a lot of friends here.”