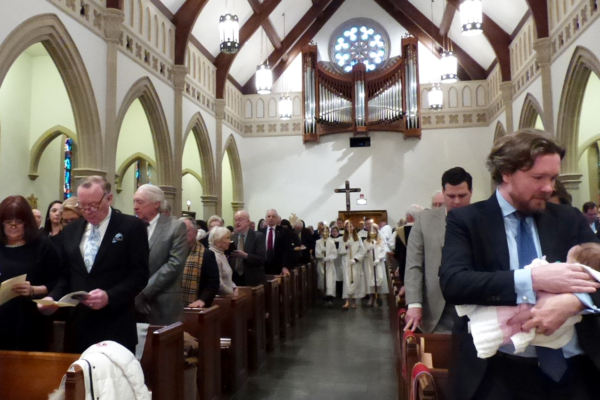 The congregation of All Saints’ Episcopal Church gathers for Sunday worship in Fort Worth, Texas, before the coronavirus pandemic forced the suspension of large in-person gatherings. Photo: Katie Sherrod

[Episcopal News Service] Six congregations in what is now known as the Episcopal Church in North Texas have until 11:59 p.m. on April 19 to vacate their buildings after being evicted by a breakaway group affiliated with the Anglican Church in North America, or ACNA.

The U.S. Supreme Court in February declined to hear an appeal by The Episcopal Church’s Fort Worth-area diocese of a state court ruling, leaving more than $100 million of diocesan property in the hands of the ACNA’s Diocese of Fort Worth. The court’s decision not to hear the case settled what had been a 12-year legal battle.

Since February, the Fort Worth Episcopalians and members of the breakaway group have been going through the buildings in preparation of the transfer. Like the rest of the dozen-year dispute, that’s been “a fairly complicated, fraught process,” said Katie Sherrod, the Episcopal diocese’s director of communications.

Some of the churches had not held indoor services for a while because of the pandemic. St. Luke’s in the Meadow in Fort Worth had been holding outdoor services and had just begun the process of reopening the building for socially distanced worship when the eviction order came. This Sunday, the congregation’s first worship service inside the building in months will also be its last one in the building.

As sad as this moment is for the Episcopalians who have called these buildings home for so long, Sherrod said the congregations have welcomed new parishioners who did not feel welcome in the breakaway parishes, such as gay couples with children.

“We’ve made welcome people who’ve been wounded by other churches,” she said. “So is it worth it? Yeah.”