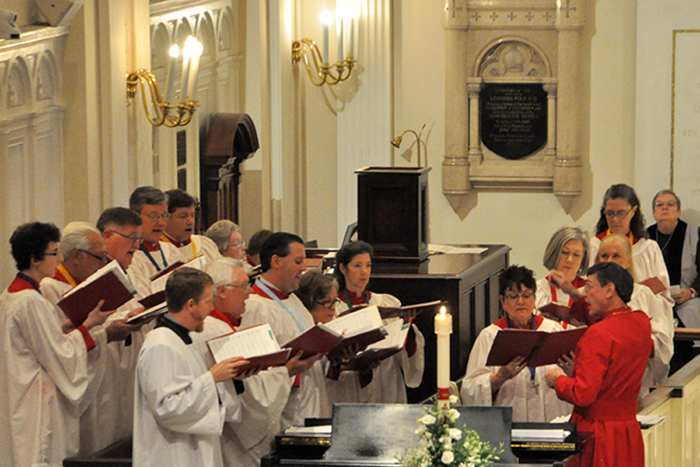 [Episcopal News Service] A memorial plaque on the back wall near the choir and to the left of the altar at St. Paul’s Episcopal Church in Augusta, Georgia, has long paid tribute to a controversial Episcopalian who likely never set foot in the church while alive.

Leonidas Polk was an Episcopal bishop, but not from Georgia. He was a general in the Confederate Army, killed by Union artillery fire in fighting northwest of Atlanta in Cobb County, which is about 150 miles west of Augusta. St. Paul’s hosted his funeral in 1864 because the ongoing war prevented the return of his body to Louisiana, where he had served as bishop. Polk, buried for nearly 80 years at St. Paul’s, isn’t buried there anymore; in 1945, his remains were exhumed and reinterred at Christ Church Cathedral in New Orleans, the seat of Polk’s former diocese. 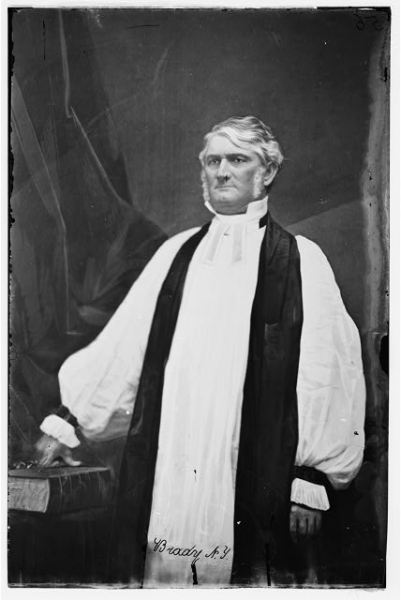 Bishop Leonidas Polk left the Diocese of Louisiana in 1861 to join the Confederate Army and fight for the South in the Civil War. Photo: Library of Congress

Few figures from Episcopal history are as noteworthy and as polarizing as Polk, and in Augusta, his legacy has fueled tensions at St. Paul’s, where clergy and lay leaders have deliberated for the past year over what they should do with the church’s plaque memorializing him. As one of The Episcopal Church’s first missionary bishops and later bishop of Louisiana, Polk was the driving force behind the 1857 founding of the University of the South in Sewanee, Tennessee. He also was a large plantation owner with hundreds of slaves. During the Civil War, he left his diocese to fight to preserve white supremacy over enslaved Black Southerners.

St. Paul’s was founded in 1750. Today, the mostly white congregation has about 800 members. As first reported by Episcopal Cafe, the church’s vestry voted in November to move the plaque. “We intend to honor that decision,” senior warden Ashley Wright told Episcopal News Service this week, but the vestry’s plans are on hold while the congregation engages in an internal reconciliation process: Some parishioners were not happy about how church leaders handled the matter.

The congregation’s former priest-in-charge, the Rev. George Muir, cited that discontent as a factor in his decision to expedite his planned retirement. He stepped down Feb. 1. The month before, Muir’s assistant, the Rev. John Jenkins, announced he too was leaving St. Paul’s, to join a church in Richmond, Virginia. The church now has an interim priest-in-charge.

The vestry hired two other Georgia priests as consultants to guide the reconciliation process, which included interviews with parishioners – not to try to persuade anyone, Wright told ENS. “We just want to hear what people feel.” A report from those consultants is due soon.

“I know there were some missed opportunities for engagement, and it caused some damage in our church,” Wright said. “Now we’re in the process of rectifying that damage.”

The reconciliation process and consultants were suggested by Georgia Bishop Frank Logue.

“The vestry of St. Paul’s is working constructively on a process toward transforming a time of conflict and developing best methods for moving forward for the health of the parish,” Logue said in an emailed statement to ENS. “As bishop I am pleased to support them in their work.”

The plaque is fashioned on a particular type of ornamental marble monument honoring the deceased that is clearly visible within the church from a distance; its inscription identifies Polk as missionary bishop of the Southwest, bishop of Louisiana and a Confederate Army lieutenant general.

In June 2020, Muir called for the memorial’s removal amid the widespread protests against racial injustice that had been ignited by the May 25 killing of George Floyd by police in Minneapolis, Minnesota.

“The racial disparity in our systems, in our culture, is real and so many of the little things we fail to notice help keep it in place,” Muir wrote in a message posted to the church’s website at the time. “For me and for others, one such little thing is the Leonidas Polk memorial. … I believe that if St. Paul’s is truly going to be the gathering place, the place of prayer and witness for our community, that we must remove things that get in the way.”

Other Episcopal institutions have grappled in recent years with Confederate symbols in their worship spaces, including tributes to Polk. The violence sparked by a 2017 rally by hate groups in Charlottesville, Virginia, prompted a renewed drive to reexamine and remove such tributes, from the University of the South in Sewanee to Washington National Cathedral. In Cincinnati, Ohio, Episcopal leaders removed from display a plaque honoring Polk at Christ Church Cathedral, the site of Polk’s consecration in 1838.

The Polk memorial in Augusta was installed when St. Paul’s was rebuilt after a 1916 fire – a replica of an earlier tribute to Polk, Wright said in a June 2020 message to the congregation in response to Muir’s call for its removal.

Muir “is leading us in the discussions that have arisen in the country over the past weeks and as the elected representatives of the congregation, the vestry is responding to and reflecting on the request to relocate the Bishop Leonidas Polk cenotaph,” Wright said in the message. The vestry would “work with the History and the Building and Grounds Committees to develop a deliberate and prayerful response to the request to relocate the monument.”

Over the summer, the vestry formed a working group to study the issue, and that group reported in September that Polk’s only apparent connection to the church was his funeral and former burial there.

Polk’s funeral was held on June 29, 1864, and his family had asked Georgia Bishop Stephen Elliott to preach, according to historian Glenn Robins’ 2006 biography of Polk. Robins notes, “The circumstances of Polk’s death provided the bishop of Georgia with an opportunity not simply to honor his friend and fellow churchman but also to defend the Confederate cause.”

Robins describes one particularly dramatic moment during the funeral when Elliott turned symbolically to the north and summoned Northern bishops to “meet us at the judgment seat of Christ” for their support of abolition. “Your brute force shall avail you nothing,” Elliott declared. “The multitudes whom you have followed to do evil shall not shield you from an angry God.”

Polk’s remains initially were buried outside the church, but a later building expansion placed the altar directly over the crypt where Polk was entombed until 1945.

“Polk’s funeral address and scholarly accounts make it clear that Polk’s legacy has been used as a symbol of the romanticized view of the Confederacy during the post-Reconstruction era and onward,” the vestry’s working group said in its September message to the congregation. “What we are discussing is whether continuing this narrative would do a grave disservice to all of the wonderful things our parish is doing in and around the community. … We welcome your thoughts and any discussion you would like to have.”

In November 2020, the vestry voted to move the memorial to an undetermined new location. The following month, Wright wrote again to the congregation.

“We know that some members of the congregation feel strongly about the move, and we respect everyone’s opinions. The vestry spent considerable time and effort in addressing the proposed relocation,” she wrote, while alluding to pandemic restrictions on gathering in the church. “We understand that this comes at a time when we are physically disconnected from our beautiful church and unable to gather in familiar ways.”

When Muir announced in January that he was retiring sooner than expected, he lamented the tone of the disagreements among parishioners about the fate of the Polk memorial.

“I have experienced patterns of behavior at St. Paul’s that I and others believe are unhealthy and systemic,” he wrote. “This process has taken its toll on me, my family and the parish.”

Jenkins, Muir’s assistant at the time, also addressed the issue in his message for the parish’s annual report, prepared for its Annual Meeting in January 2021. “It has been personally painful to witness genteel violence inflicted on the parish,” Jenkins said. “The work ahead includes confronting old wounds so that healing may occur that leads to reconciliation, resurrection and new life.”

Later in January, Wright provided an update to the congregation, announcing that priests from two other churches in Georgia would be hired for about $5,000 total to spend approximately four months interviewing St. Paul’s parishioners. After determining the sources of conflict, they would then recommend a path forward.

In considering the Polk memorial, “our vestry went through a pretty focused, intense purposeful process,” Wright told ENS. “A lot of prayer, a lot of energy, a lot of meetings, a lot of hours. We had the opportunity to educate, reflect, respond, but our congregation was not able to participate in that process with us.”

That may have fueled the anxiety and mistrust within the congregation, Wright said, and in hindsight, the vestry probably should have engaged parishioners in a similarly purposeful process of deliberation. “That’s kind of where we are now,” she said. “We made the decision. We believe it’s the right decision, but we want the congregation to have an opportunity to process it as well.”