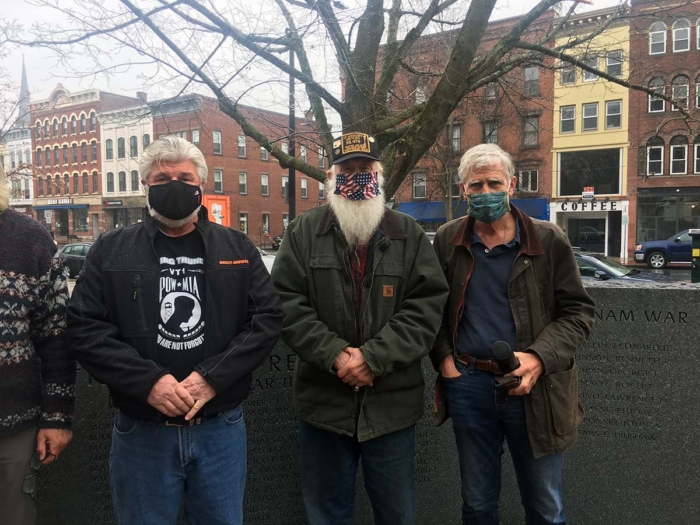 [Episcopal News Service — Northampton, Massachusetts] John Kelley wasn’t comfortable talking about Vietnam with a non-veteran in the room. He said so, directly, from the end of a large conference table, the emotion in his voice quieting everyone else. He’s tall, at least 6 feet, with long white hair and a white beard that brushes against his chest. A cloth mask patterned with American flags covered much of his face and beard, drawing attention to his eyes.

Kelley, 75, is a husband and father. He’s also an Army veteran who served 15½ months in Vietnam. When he returned from the war to Northampton, Massachusetts, he eventually started his own trucking business, choosing to be alone most of the time — not for a year or a decade, but for 50 years, until he retired four years ago. As his schedule became less demanding, memories of the war came back to him more frequently; he could no longer avoid the past. “I’m an easygoing guy, but when it comes to Vietnam, it’s hard for me,” he told Episcopal News Service in March. For decades, he didn’t tell people he served in Vietnam, but he’s comfortable talking about it with other veterans. And from the time that he retired until the pandemic, he got together with several dozen of them every Wednesday at the local Building Bridges lunch.

A community ministry of the Diocese of Western Massachusetts, Building Bridges hosts regular lunches for veterans in towns around the diocese. The pandemic has shifted meals from sit-down comfort food to grab-and-go bags; it has not impacted the ministry’s planned expansion into the neighboring Diocese of Massachusetts and possibly New Hampshire. With all veterans eligible for the vaccine and a tent at the ready, the first eastern Massachusetts site should launch in Swansea next month. 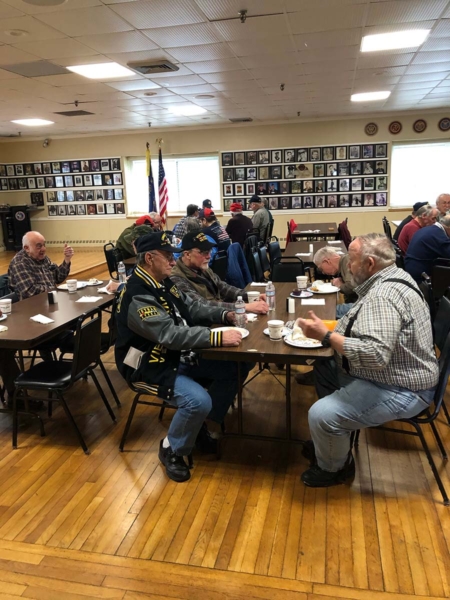 Veterans having lunch before the pandemic at Building Bridges in Leominster, Massachusetts. Photo courtesy of Chad Wright

In 2012, Western Massachusetts Bishop Douglas Fisher contacted the Rev. Christopher Carlisle about starting a housing ministry for female veterans. Fisher’s time as a U.S. Military Academy chaplain had connected him with veterans, and he knew that while men leaving the military could access transitional housing, females had limited or no access to the same transitional services. He asked Carlisle, who had founded Cathedral in the Night, a Northampton street church serving homeless people, to lead the effort. When that idea failed, Carlisle and Steve Connor, then a Veterans Affairs officer, decided on a ministry with a simple premise: offer a free lunch at the World War II Club to local veterans and an optional guest, no expectations, no strings attached.

“For the first three months or so, we’d get one veteran, three veterans, two veterans, and it wasn’t looking terribly promising,” Carlisle said. Three months in, about 25 veterans began showing up each week. “And then it really took off” in 2013, Carlisle said. By early 2020, 60 to 70 people gathered regularly for the Northampton lunch. In all, about 300 gathered for lunch across Building Bridges’ five weekly sites, while up to 200 gathered monthly in four other towns.

Of Massachusetts’ nearly 7 million residents, 323,253 were veterans in 2017. In 2019, an estimated 19 million Americans, or nearly 6% of the population, had served in the military. Most served during the Gulf War (7.6 million) or the Vietnam War (6.3 million), while fewer than half a million World War II veterans were still alive. Women comprise about 10% of veterans, a percentage reflected at Building Bridges’ lunches.

Kelley feels comfortable and safe at Building Bridges, where “people feel like your brothers and sisters,” even among generations of peers, including post-9/11 veterans he’s met who served more tours in Afghanistan than he did in Vietnam. Connor, now director of Central Hampshire Veterans’ Services, said that younger veterans are equally, if not more, protective of their Vietnam War, Korean War and World War II elders. 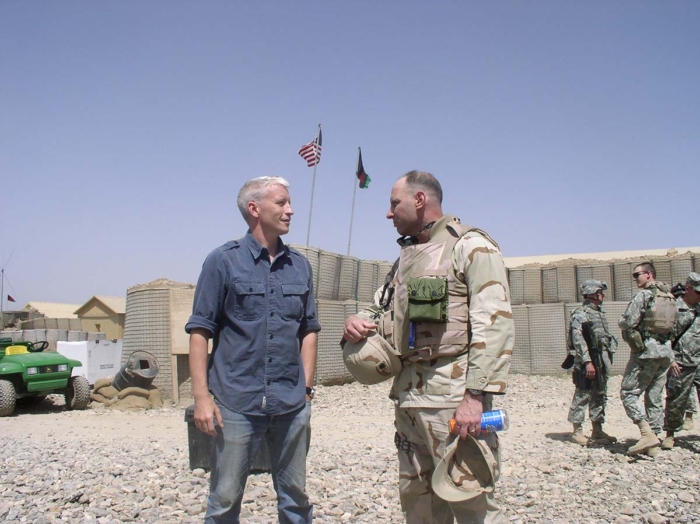 John Paradis with CNN’s Anderson Cooper at a forward operating base near the Afghanistan-Pakistan border in 2006. Photo courtesy of the U.S. Air Force

Veterans face “distinctive health issues related to their military service and are more likely to suffer from trauma-related injuries, substance abuse and mental health disorders than people who have never served in the armed services,” according to the U.S. Census Bureau. Transitioning from the military back to civilian life can make things harder.

“There’s an adjustment, no matter who you are, leaving military culture and coming into the civilian culture,” said Connor, who has cooked for Building Bridges and promoted the program. “It’s a shock, as big of a shock as boot camp was taking you out of the old culture.”

Connor served on an aircraft carrier from 1977 to 1979. He left the Navy two years early, after surviving a sexual assault involving a colleague, something he first talked about 12 years ago. Many veterans don’t address the emotional effects of their military experiences, Connor noted. “People who didn’t face it or didn’t work through it — for instance, me — it comes back,” he said.

Every few weeks, Building Bridges features a speaker or program specific to veterans’ mental and physical health needs, and while it is a diocesan offering, only two lunch sites are churches. Carlisle, who isn’t a veteran, has learned that many feel judged or dismissed by organized religion. Attendees appreciate his subtle pastoral presence. “It’s really just bringing people together,” Fisher said. “It’s Eucharistic, right?”

That simplicity has yielded profound effects; it’s common for veterans to say that the ministry saves lives. Connor and other veterans interviewed for this story talked about the social isolation felt by many veterans; studies show that veterans, even noncombatants, are at a higher risk of suicide than the general U.S. population.

“I can’t count how many times I’ve had veterans come up to me and say they wish Building Bridges was nationwide,” said Associate Director Chad Wright. “Food gets them in the door. Camaraderie keeps them coming back.” 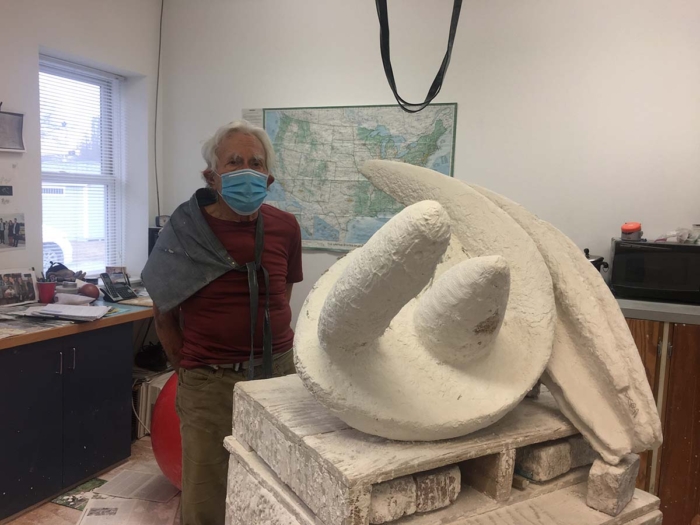 Like others, Northampton resident Richard Rice initially went to Building Bridges for the food. The Vietnam War veteran and sculptor spoke to ENS in his studio, where fine white dust covered everything. At 80, he still practices psychiatry part time, but estimates that he spends 70% of his days alone, sculpting. Five years ago, Rice planned to get a lunch to-go from Building Bridges; he said he didn’t “feel worthy” of joining the other veterans. After completing medical school, he’d spent two years in the Army doing research at a military hospital in Philadelphia, Pennsylvania. “Some of those guys were fighting for their lives,” Rice said of the other lunch-goers. “All I did was kill frogs and do experiments on their eyes.” 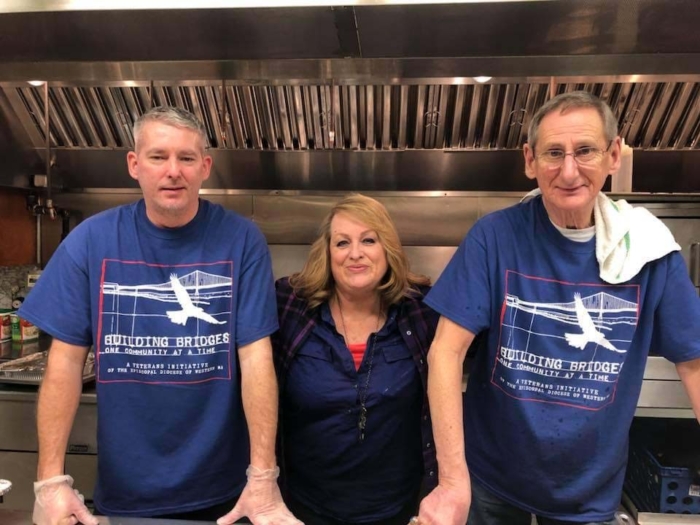 According to Wright, who served two years of active duty in the National Guard during the Gulf War and six years in the reserves, anyone who has served one day in any branch of the military is welcome at Building Bridges. Rice couldn’t imagine feeling comfortable there, but people invited him to join them. They were friendly and smart — and they didn’t judge him. Building Bridges provides two meals, Rice said: the food on the table and the people around it, “and they’re both nourishing.” Since that first lunch, Rice has reflected on his shame as a noncombatant Vietnam veteran; he felt tainted. He’s beginning to understand that his feelings aren’t unusual. “I’m starting to see that that just may not be me,” he said. “It might just be what it’s like.”

It initially surprised Rice that a church would host veterans, asking for nothing in return, with little or no religious elements to the meal. John Paradis, who served in the Air Force from 1989 until 2009, said that though one might not attend an Episcopal church service, the sense of belonging veterans get at Building Bridges is powerful enough to restore their faith in humanity after serving and then seeking their place in American society upon return. “There’s true spirituality that goes with that,” he said. “It can be magical.”

Paradis’ last role in the Air Force was as a public affairs officer. His family moved nine times in 20 years. He struggled when he retired from active duty, which was also hard on his wife and children. Referencing Sebastian Junger’s book “Tribe,” Paradis highlighted the clash between, on one hand, military units’ sense of purpose, community and interdependence and, on the other, the isolation and independence of civilian American culture, in which veterans are often pigeonholed as either broken or superhuman. “It’s really important to give veterans an opportunity to tell their stories,” he said. 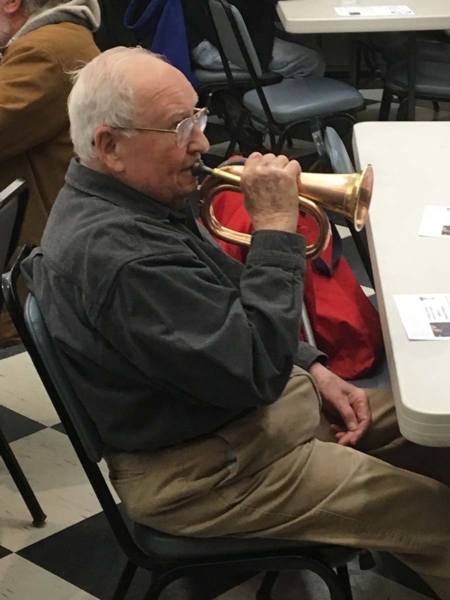 During the pandemic, veterans have continued to pick up bagged lunches or have them delivered. They catch up outside or in open garages, including Kelley’s, as Carlisle plans for the future: The World War II Club closed for good, prompting a search for a post-pandemic venue. He’s also working to secure enough funding to sustain the program’s administration long term, as Building Bridges’ website and social media presence become more robust. The hope is increased communication with veterans, but Carlisle isn’t sure how many people will use it. “Word of mouth among veterans is huge,” he said.

Awareness has already spread elsewhere in the state. The Diocese of Massachusetts plans to launch its first Building Bridges site later this spring at Christ Church, Swansea. The diocese’s missioner for networking and formation, Martha Gardner, is planning the debut with the Rev. Alan Hesse, rector, and Christ Church parishioner Dave McCarthy. McCarthy is a Vietnam veteran connected with the eastern Massachusetts veteran community, in part through Vet to Vet. Christ Church will invite veterans and their families to a Saturday morning breakfast prepared by parishioners.

As Building Bridges expands, Carlisle sees a specific dynamic as the key to the ministry’s success. “The critical element that inspires a healthy Building Bridges culture is gratitude,” he said. Americans who have had little contact with veterans, he added, need to let go of “historical prejudices and notions that veterans aren’t part of my life, and realize they are — and have to be.”