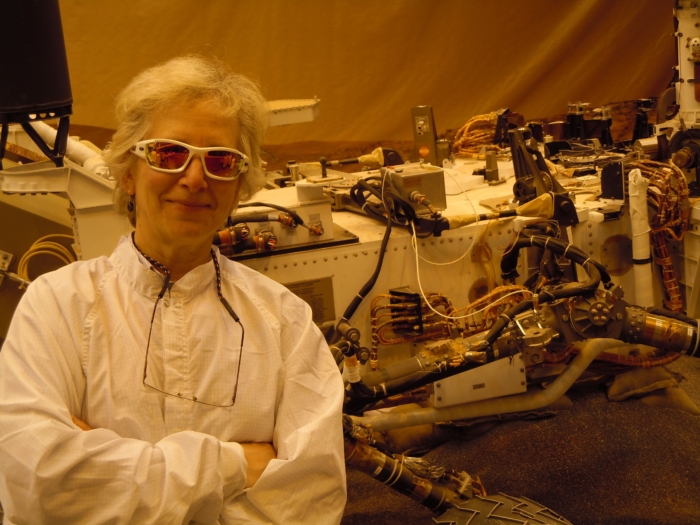 [Episcopal News Service] When Episcopal News Service recently spoke to the Rev. Pamela Conrad, rector of St. Alban’s Episcopal Church in Glen Burnie, Maryland, she was exhausted – but not only from the liturgical marathon of Holy Week or the weary slog of daily life during the COVID-19 pandemic. On top of that, Conrad is a member of the tactical operations team for NASA’s Mars rover mission, often working through the night, analyzing feedback from the Perseverance rover as it searches for signs of potential life.

From her living room in Maryland, Conrad connects virtually with scientists around the country and at NASA’s Jet Propulsion Laboratory in Southern California for several shifts a week, monitoring sensors that she helped design as they transmit data about the Martian environment. Among the instruments she works with are the cameras that have sent back over 25,000 photos, including Perseverance’s first selfie, which shows the rover and the small helicopter that is expected to take the first-ever powered flight on another planet later this week.

The Perseverance rover took these photos of itself and the Ingenuity helicopter on April 6. Photo: NASA/JPL-Caltech/MSSS

“Every time we get new images, it is such an amazing sense of awe,” Conrad said.

Conrad, 68, has been working for the National Aeronautics and Space Administration since 1999 on projects including the Curiosity rover, which landed on Mars in 2012. Priesthood is a more recent vocation; she was ordained in 2017 and has continued her scientific work on the side since becoming a rector.

“My full-time job – and I’m very clear about this – is as a priest. And my second thing that I do is the science because the science informs my ministry as a priest,” Conrad said.

She told ENS that the scientific and spiritual worlds have always been intertwined for her, united by a sense of wonder. From an early age, she remembers “being very in touch with the general concept of nature and God.”

“I think that the evolution of me as an explorer with respect to this world as well as other worlds, and also as an explorer of the vast spiritual landscape that’s internal, have both been present, always,” she said.

Conrad traces her interest in space exploration back to the night when she was a toddler and her father pointed out Sputnik – the first satellite launched into orbit – passing overhead, but she took a roundabout route through other professions before arriving at NASA. After training as a musician and working as a video producer, she pursued a graduate degree in geology, focusing on geobiology – the study of how life arises from planetary landscapes. That led to a job at the Jet Propulsion Laboratory, where she applied her knowledge of geobiology to the search for life on Mars. 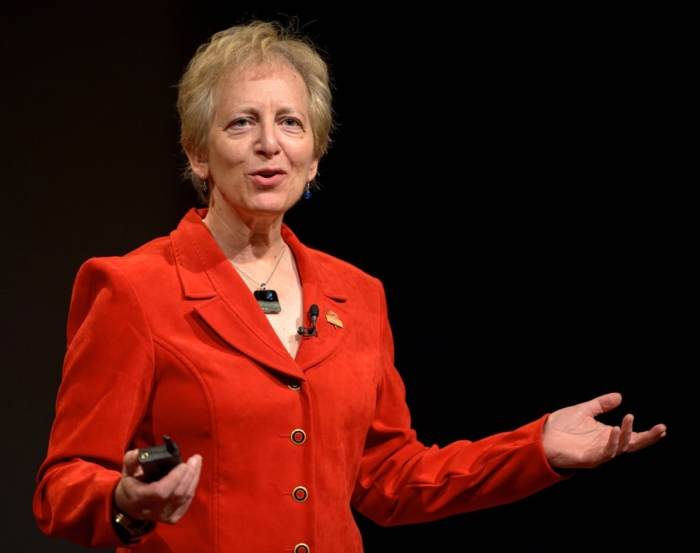 “[It] was an obvious choice to become involved with Mars right away,” Conrad said, “being our closest planetary neighbor and one that I could reasonably explore in my lifetime with robots.”

But all the while, Conrad was experiencing a parallel calling to return to The Episcopal Church, from which she had “run in horror” as a young woman. In the 1970s, when Conrad was in college and women’s ordination was a disputed issue, the rector of her church in was disciplined for allowing an irregularly ordained woman to celebrate the Eucharist.

“I just said, ‘You know, Jesus would never approve of business this way; I’m just going to go be a free agent.’ And that didn’t work because I kept getting this subtle call back to community, but I didn’t know how that should be manifest,” she recalled.

Two moments of epiphany gave her some clarity. On a trip to Antarctica, she stood and stared at a distant mountain range as the wind pounded her face and “felt all the anger that I had about the church just blow out of me. … It was a road-to-Damascus moment.” Then, at a rally against Proposition 8 – the 2008 California ballot initiative that banned same-sex marriage in the state – she was saddened by an encounter with anti-gay Christian protesters who were screaming in anger, along with their children.

“I remember thinking, ‘If I had stayed in the church, perhaps I could have been a voice of kindness and love and there wouldn’t be little children yelling,’” she told ENS. “That’s when I thought, ‘I’m going back to church, and I’m going to stay until I can develop my own leadership within the church.’”

At first, she worried what her scientific colleagues would think about her entering the ordination process, but it ended up confirming her call to ministry.

“I was afraid to tell them,” she said. “As it turns out, no one thought it was weird. In fact, they began to come to me in a pastoral sense. And I was surprised. That was a good lesson – that I should not prejudge people, and that we all have the need to connect in community, no matter how nerdy we are. … I think you always deal with people on a pastoral basis, whether you’re relating to them on a science project or you’re relating to them in a congregation.”

Now, with her role as a full-time rector, she must balance her participation in the Perseverance mission with the responsibilities of a parish priest. She only takes night shifts if she knows she can sleep in the next day, and she finds a substitute if something comes up, like the recent death of a parishioner.

“It’s difficult to draw the line sometimes … but I have to be disciplined about that, because the pastoral needs of the people in my congregation are my highest priority.”

Conrad is a firm believer in the harmony of science and faith – which she advocates through her leadership role in the North American province of the Society of Ordained Scientists – and sees the search for life on Mars as an affirmation of a God who exceeds human understanding. 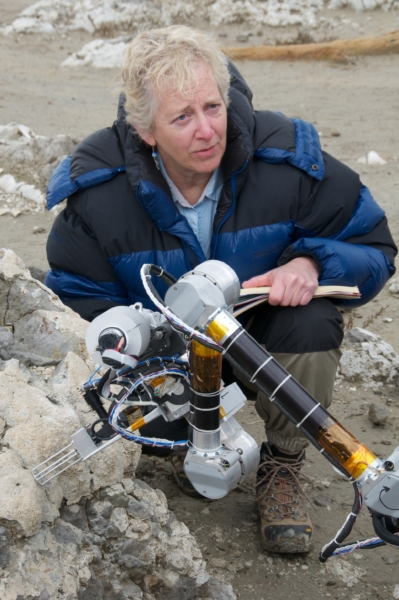 “People often regard humans as the pinnacle of creation. We don’t want to consider the possibility that Mom doesn’t like us best,” she told ENS. “As Christians, what we have to ask ourselves is, If God can create life here, is God big enough to create life elsewhere? Of course, the answer is yes.”

Conrad also sees a role for The Episcopal Church in dispelling the myth that science and religion are incompatible, given its roots in the Anglican concept of faith informed by reason.

“In a time when people are discarding reason in favor of conspiracy theories, or suspicion of science, we can help,” she said. “And I believe that we are called to this moment to help reconcile those two perspectives so that we can ask ourselves, Why wouldn’t we use all the gifts in our disposal, all the processes of learning and knowing? And science is one of those processes.”

She also thinks the church is called to take a proactive approach to the ethics of interplanetary travel and colonization. Given the tragedies brought about by exploration and colonization on Earth, Conrad wants Christians to start thinking carefully about how the human race can ethically expand beyond Earth.

“How can we as a culture do a respectful job of exploring so that we can explore without exploiting?” she asked. “As we become poised to be an interplanetary species – and we will, because exploration is a biological imperative – will we take our Christian selves into that exploration? … And we as beloved community can play a role in that by articulating it now before we lift off for Mars.”