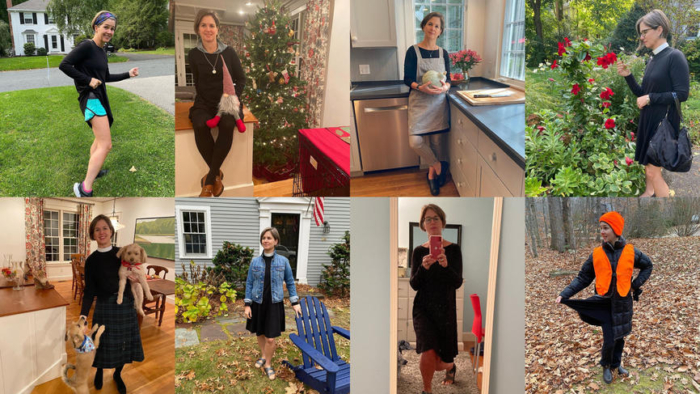 [Episcopal News Service] For many who have worked from home during the pandemic, wearing the same clothes for more than a day has become a normal occurrence. But one Episcopal priest is doing it to the extreme, on purpose.

In 2020, the Rev. Sarah Robbins-Cole, rector of St. Michael’s Episcopal Church in Holliston, Massachusetts, and chaplain at Wellesley College, wore the same dress for 100 days in a row as a challenge to counter “fast fashion” – the now-ubiquitous practice of buying cheap, mass-produced clothing and throwing it away or donating it to charity when it’s no longer fashionable.

The challenge is intended to change people’s perceptions of how much clothing they need, and to bring awareness to the fashion industry’s unsustainable and environmentally harmful practices.

“I’ve always been concerned about fast fashion anyway and the impact on the planet,” Robbins-Cole told Episcopal News Service.

She wore a breathable black merino wool dress from Sept. 6 to Christmas – except to sleep and work out – and it only needed to be washed about a dozen times. She enjoyed the challenge so much, she said, that she’s now more than halfway into yet another 100-day dress challenge, which she started on Jan. 29 with a different dress.

Robbins-Cole got the idea for the 100-day dress challenge from a social media post several months into the pandemic.

“I thought, ‘Well, this seems like something that would be an interesting challenge to do during a pandemic,’” she said. “It just kind of suited my moral compass and … I usually wear a dress to work anyway.”

Among the environmental impact statistics that stick with her are the approximately 700-800 gallons of water that go into producing one cotton T-shirt and the 81 pounds of clothing that end up in landfills for each American every year. Americans now buy five times as much clothing as they did in 1980, according to textile recycling company USAgain; when it’s no longer wanted, 85% of that clothing gets thrown away, and even the remaining 15% that gets donated often ends up in landfills anyway.

For Robbins-Cole the project started as more of a personal challenge – a way to get creative with putting together a new look each day with the same dress as a base.

“I chose the first dress because it seemed the most versatile,” she said, “so I thought I could probably get 100 different looks out of it.”

Since she wasn’t seeing people in person as much, not many people noticed initially, especially since she often wears black clerical clothes anyway, but she did tell the students she was working with at Wellesley College that it was intentional.

“I thought, ‘If anyone’s going to notice I’m wearing the same dress, it’s going to be my students,’” she said. “I told, like, one friend, two friends maybe, but really didn’t share it with a lot of people.”

She made an Instagram account to document all the different looks she got out of the dress, posting a picture of her outfit every day along with some brief reflections, and accumulated a few followers until it started getting picked up by media outlets – from local TV stations to news sites from as far away as England and India. She now has over 5,300 followers.

Since Robbins-Cole did not come up with the idea of the 100-day challenge, she’s not sure why her particular story has gotten so much traction. Maybe it’s because she’s a priest. Maybe it’s the surprising versatility of the outfits she’s put together. Maybe it’s the thoughtfulness of the reflective captions she writes – the stories behind the other articles of clothing she wears, the slice-of-life observations. Or maybe this simple, daily ritual is just the kind of thing that helped people stay grounded during a chaotic time.

“I’m surprised that there would be so many people interested in my story, because it’s just one middle-aged woman wearing the same dress for 100 days,” she told ENS, “but I think that we like getting glimpses into other people’s lives.”

To her surprise, her Instagram account has even turned into a tight-knit “community” of people from around the world.

“I love checking in with them and seeing what they’re doing every day,” she said. “There’s a lot of things that are bad about social media, but they’re also some really wonderful aspects. And in this particular platform, people are really supportive.”

She gets comments and questions about the challenge and about her life “all the time” and has come to view it as a kind of ministry.

“That was one of the reasons why I kept going,” she told ENS. “I’m on sabbatical right now for my church, so it’s, in some ways, kind of pastoral care. Some of it is just advice. Some people ask me for styling advice, which is really funny, because it’s not really my thing.”

A common reaction she gets is disbelief – “That’s so great you can do that; I could never do it.” But it turned out to be easier than she expected, and “it’s just seriously not a big deal,” she said. As of April 8, she’s 68 days into the second 100-day challenge, this time using a different dress – also made from breathable black merino wool – that she received as a gift. Because her followers asked her to keep posting her daily outfits, she’s kept up the routine every day.

But is this just a Zoom-era challenge? When it’s safe enough to gather in person regularly, will she switch it up more often?

“I don’t know – I’ll probably go back to my clothes at some point,” she said. Until then, she’s enjoying making connections and educating people. “I don’t know how long I’ll do it into the future, but it’s working.”