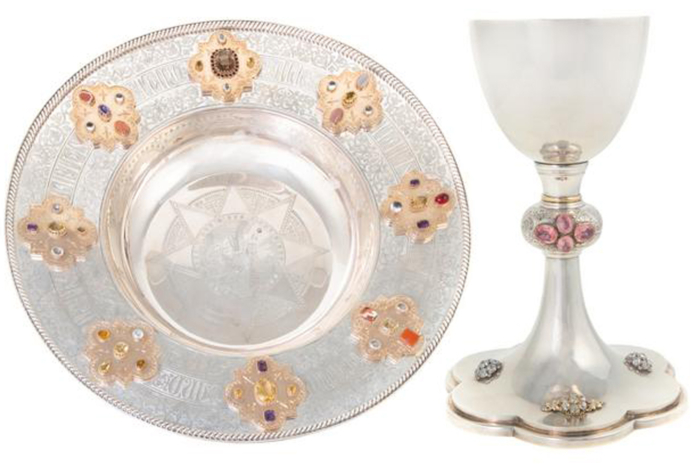 The gem-encrusted silver offering plate and chalice up for auction were given to St. Paul’s Episcopal Church in Baltimore, Maryland, on Easter 1876 according to the items’ inscriptions. Photo: Alex Cooper Auctioneers

[Episcopal News Service] St. Paul’s Episcopal Church, founded in 1692, is the oldest church in Baltimore, Maryland. It owns an offering plate that is itself more valuable than any offering the congregation might collect on a typical Sunday. Made of silver and encrusted with gems, the offering plate bears an inscription dating it to “Easter 1876.” A similar inscription is found on another historic item, one of the church’s silver chalices, which features clusters of diamonds.

Neither item is in regular use. Both have been stored in a safe for the past decade, the Rev. Mark Stanley told Episcopal News Service. “You’d almost need an armed guard to bring them out and use them. They’re too valuable,” he said.

Too valuable to use on Sunday – but possibly just valuable enough to help the congregation endow an educational scholarship. Church leaders are working with an auction house to sell 15 silver items at St. Paul’s, including communion sets and a baptismal font bowl. The proceeds are estimated to reach $75,000. The gem-encrusted plate and chalice alone could be worth up to $60,000 at auction.

“Why are they sitting in a safe? Let’s invest them in the children of Baltimore City,” said Stanley, who has served St. Paul’s as rector for 17 years.

The downtown church, commonly known as Old St. Paul’s, established and still maintains ties to the St. Paul’s Schools in suburban Brooklandville. It began as a school for girls in 1799, initially serving orphans. In 1849, a second school opened for boys. The schools, which merged in 2018, have roots in the church’s historic mission of service to financially disadvantaged children, Stanley said.

This year, he and other clergy and lay leaders, looking for a way to “stay in touch with that mission,” developed the scholarship plan. The congregation’s anti-racism council also supported the effort to assist students, specifically African Americans, who otherwise might not have the opportunity to attend the pre-K through 12th grade day school. The congregation had researched some of the church’s historic complicity in white supremacy and racist institutions, particularly how it benefited in its early years from the slave-dependent tobacco industry.

“We have some rights to wrong here,” Stanley said. “We want to make a difference, to address systemic racism.” 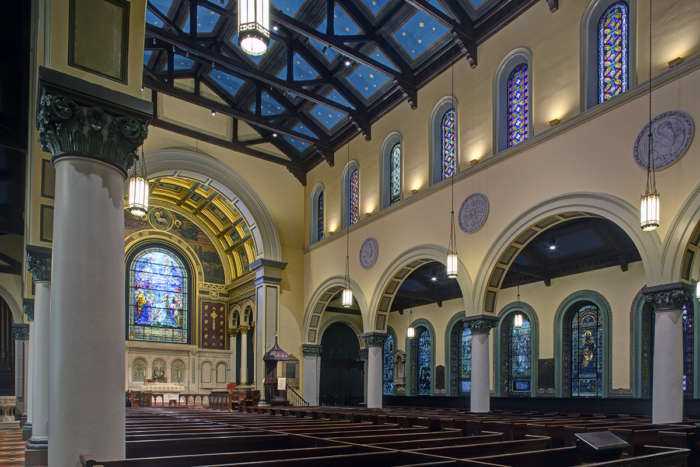 In February, Stanley proposed to the St. Paul’s vestry that the church sell some of the historic items that had been locked away in the church’s safe. The vestry agreed to combine proceeds from that sale with money from the church’s endowment to raise the initial $300,000 to establish the scholarship fund.

The church plans to work with the nonprofit Baltimore Educational Scholarship Trust, or BEST, which will identify students in the community who would be appropriate candidates for the scholarship. Stanley said the church hopes this fall to provide its first scholarship of $15,000 to help one student attend the St. Paul’s Schools where high school tuition is $32,800. The school is offering financial aid to offset the remaining costs for the student.

The church expects its first scholarship recipient to be entering the ninth grade, and the annual scholarship will allow that student to complete high school at the private school. After that student graduates, another student will be chosen for the next scholarship.

If the scholarship fund grows, the church may be able to increase the number of students it supports each year, Stanley said. For now, the focus is on raising the initial money through the auction, which is underway this week (lots 436 to 450) through April 8. It is managed by Alex Cooper Auctioneers of Towson, Maryland.

St. Paul’s Episcopal Church has an average Sunday attendance of about 180. Some of its 500 members raised concerns about letting go of valuable items connected to the church’s history, but in general, the church’s goal of creating the scholarship has generated support and excitement within the congregation, Stanley said. “To me, there’s a time to do bold action,” he said, and he emphasized that the church isn’t selling everything, only items that haven’t been used in years.