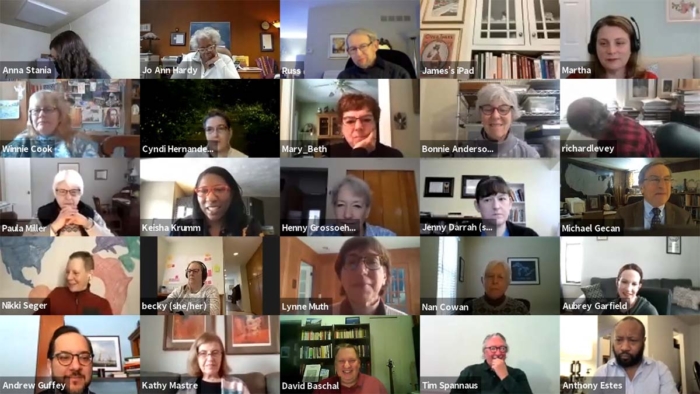 [Episcopal News Service] Michigan Bishop Bonnie Perry’s leadership follows two frameworks: Scripture and community organizing principles. She employs this mix of theological and secular tools within the diocese and the communities and region it serves.

“I long for a church that is dynamic, or relevant, deeply involved with the issues of the world and continually calling people back to what nurtures our souls, what gives us life, and then using that sustenance to then create change, to create a more just world. A world that some people may think is beyond our reach, a world that may be naive for me to think about, but I think our communities of faith are sometimes not audacious enough in our hopes,” Perry told Episcopal News Service in an interview when asked about her vision for the diocese.

Perry was consecrated bishop of the Diocese of Michigan on Feb. 8, 2020, just over a month before the COVID-19 pandemic forced churches to suspend in-person worship. The diocese covers southeast Michigan, including Detroit and its suburbs, and extends 90 miles west through Ann Arbor to the state capital, Lansing.

Prior to her consecration as bishop, Perry served as rector of All Saints’ Episcopal Church in the Ravenswood section of Chicago, Illinois, for 27 years. In Chicago, she was known inside and outside the church for inspiring community engagement. All Saints later became an important community partner on an affordable housing campaign aimed at redressing redlining and other racist and discriminatory lending and housing policies that historically targeted African Americans.

Less than six months after Perry’s arrival in Michigan, at her direction the diocese began offering community organizer trainings that were facilitated by Michael Gecan, senior adviser and longtime organizer at the Industrial Areas Foundation, and Keisha Krumm, executive director and lead organizer of Greater Cleveland Congregations.

Leaders in the Diocese of Michigan “want to rebuild and improve their institutions. And they’re looking for tools and ways to think about it, get it started, engage their own staffs, clergy and lay leaders,” Gecan told ENS. “And that’s where it all starts: It starts with talented leaders who understand their mission, understand the challenges, understand the context, and then want to begin testing, experimenting and trying different ways to revitalize their institutions.”

The diocese offered trainings in June 2020 and again in February. “After the first training, there was a lot of buzz and we were able to get 70 more [participants], and now it’s buzzing again,” said Jo Ann Hardy, the diocese’s canon to the ordinary and chief operating officer and a native Detroiter. “Folks do see the value; they see the value for their community and they also see the value in their local congregations….

“What we’re doing right now through the community organizing training efforts is trying to identify leaders, so that when we see a big problem in our communities abroad in the diocese, we can galvanize people who can lead those efforts and also already have established relationships with community leaders and folks in municipalities that can help us get big things done.”

Building on participants’ enthusiasm, the diocese is offering further leadership training to develop the one-on-one relationship-building tools. These skills are necessary for “galvanizing” power to address such issues as lack of affordable housing, food insecurity, police brutality and systemic racism, environmental injustice and gentrification, and to support efforts including criminal record expungement, which helps formerly incarcerated individuals reintegrate into society and the workforce.

Episcopalians engage in public life as individuals, groups, networks and coalitions; organizing emphasizes the strength of citizens’ consolidated power. Perry was first introduced to community organizing in 1989, around the time of her ordination to the priesthood while working in the Diocese of Newark alongside the Rt. Rev. Mark Beckwith, who would later become the diocesan bishop.

“What I’m looking for and longing for, praying for and working for is I want our communities of faith to be people who have the ability to enact Gospel values. You’re only able to put the values in place that you have the power to make happen. And for me, power is morally neutral; it’s what you do with it,” Perry said.

Participation in public life is not the same as partisanship, or party fealty. Afterall, as Gecan pointed out during the February training, political parties regularly swap governing power, and to affiliate with any one party would be ineffective. In his book, “Going Public: An Organizer’s Guide to Citizen Action,” Gecan presents case studies where citizens collectively shifted the power dynamics with elected and government officials, landlords and corporate leaders to advocate for everything from affordable housing to pubic pools to cleaner, better-stocked supermarkets.

“‘You only get the justice that you have the power to compel,’” Hardy told ENS, sharing what she called her favorite “Mike Gecan quote.”

During the second day of the two-day online training, participants observed Gecan and former House of Deputies President Bonnie Anderson, who is a member of All Saints’ Episcopal Church in Pontiac, have a one-on-one conversation during which they got a sense for one another as people – who they are, what drives them and what issues are important to them. Then the group paired off in private Zoom rooms for 20 minutes to practice having an initial meeting, during which they worked on making contact and establishing rapport, coming together ahead of a need or crisis, or to divert a crisis.

“The way he [Gecan] structured one-on-one meetings was really helpful for me,” said Asztalos, who has worked as a professional activist on political campaigns, mostly recruiting and motivating others to participate. “It was helpful because most of my one-on-one experience is more traditional, like interview mindset: Can you do this job? Are you interested? That kind of stuff.” 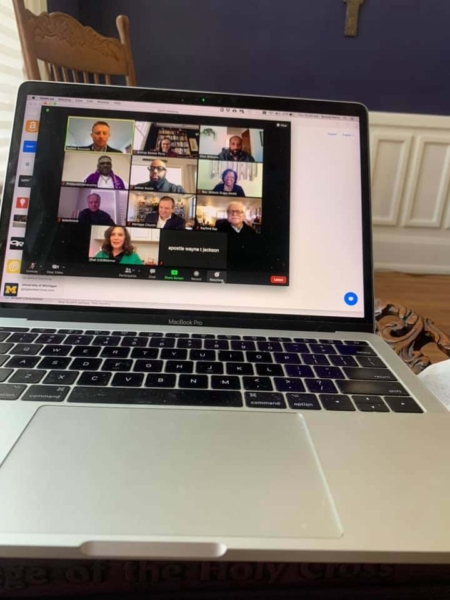 Perry views having conversations with community leaders and elected officials as part of her job. “If we’re going to be effective in shifting the culture of our country to that where we are more connected rather than polarized, then you know, we need to have relationships with each other. And then you can make common calls, and then you can move on an issue,” she said.

The Rev. Nikki Seger, who leads St. Michael’s Episcopal Church on Lansing’s southeast side, was a lay member and warden at All Saints’ Episcopal Church in Chicago while Perry was rector there, and Seger served on Michigan’s diocesan bishop search committee, which prioritized racial reconciliation work in its profile.

“I have known for a long time that Bishop Perry has, you know, this, this call for organizing as a way to be effective church in the world,” Seger said.

Seger’s parish is looking to couple its work around Sacred Ground, The Episcopal Church’s film-based dialogue series on race and faith, with organizing, and it has both an advocacy and an outreach team. “It took us a little while to differentiate what advocacy was versus outreach,” she said.

Outreach is addressing the immediate problem, while “advocacy is looking upstream and seeing what’s causing it,” Seger said, paraphrasing the famous Archbishop Desmond Tutu quotation: “There comes a point when we need to stop just pulling people out of the river. We need to go upstream and find out why they are falling in.”

Though not inherently bad, service absent a broader vision can create or reinforce dependence, as Gecan pointed out during the training. Part of the challenge is that “it’s endless and doesn’t get to the root” of the problem, while also diverting from mutuality, which turns recipients into beneficiaries.

Some years ago, members of All Saints Episcopal Church in East Lansing began to turn their attention to the reasons people were metaphorically falling into the river.

“When I came to All Saints in like ’91, I was the director of Christian education, and at that time, we did a lot of outreach, which would be service,” Janet Chegwidden told ENS. The social justice piece began to come together about 10 years later, when All Saints members began to read and learn about engaging politically and influencing public policy. “Then we kind of segued into Action of Greater Lansing and really tried to do both, separating outreach as a service and immediate help for those in need, as opposed to effecting change, which is what I consider social justice.”

Through Action of Greater Lansing, a faith-based, nonpartisan coalition that works to hold elected officials accountable to the needs of their constituents, Chegwidden has led a campaign to provide local specialty health care services to chronically ill children insured by Medicaid, which is work that requires a long-term commitment.

After taking part in the organizer training, Chegwidden said she also appreciated the one-on-one conversation exercise, since oftentimes interactions, particularly with officials, can feel stilted, with one person doing most of the listening. “I would like to be a bit more confident in how to build power relationships with decision-makers.”

“My own sense of priesthood, personhood doesn’t get real energized around activism; I wouldn’t describe myself as an activist priest,” Estes, who was ordained in 2019, told ENS. As a new curate, he met with Perry and they discussed his passions and energy when she suggested he take the introductory organizer training, which he did last month.

“I didn’t know what to expect. What I got was another way to think about what it means for the kingdom of God to have come near to us, not only initially in Jesus, but what it means to continue to proclaim and promulgate that today,” said Estes, whose church is located near the Detroit River in the city’s historic Bricktown section. “It is a way of, of using and aggregating the institution’s power, the local church’s power to make our little corner of Rivard and [East] Jefferson, wherever our local church is, to make that look more like an annex of the kingdom of God on the Earth.”

“We need to make this zip code look a little bit more like the kingdom of God, where the eyes of the blind are open and the hungry are fed,” he said. “Community organizing is just another way to do that very work by essentially making disciples and getting leaders together to work also for that same kind of change. … When they come home from a long day of being in the world and confronting the powers and speaking truth to power, I want to make sure that they have water to bathe their feet in, and bread and wine to eat and drink.”

– Lynette Wilson is the managing editor of Episcopal News Service. She attended the February 2021 organizer training along with participants from the Diocese of Michigan.