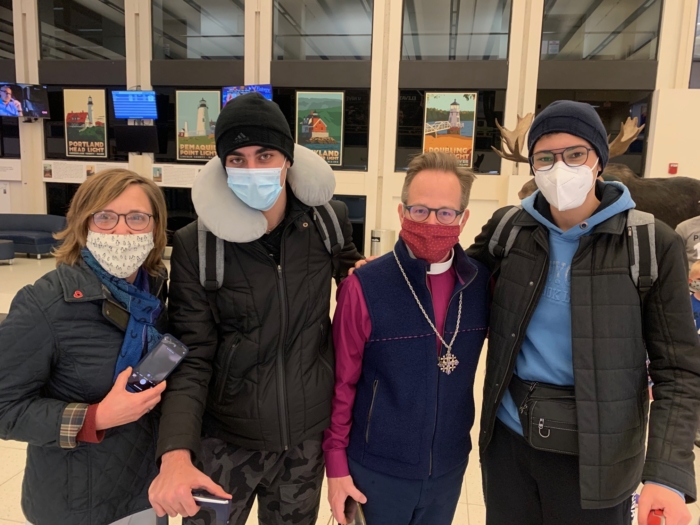 [Episcopal News Service] The two teenage sons of an Anglican archdeacon in Lebanon have arrived safely in the United States to study at a boarding school, thanks to an effort by the Diocese of Maine.

Ralph and Marc Zoorob, ages 15 and 16, are the sons of the Ven. Imad Zoorob, archdeacon of Lebanon and Syria in the Episcopal Church in Jerusalem and The Middle East. The Diocese of Maine and a group of determined Episcopalians organized a campaign last year to bring the boys to Lincoln Academy in Newcastle after hearing firsthand from the archdeacon about the deterioration of living conditions in Beirut due to the Aug. 4, 2020, explosion and the country’s economic crisis.

After months of fundraising and wrangling with immigration logistics, the final step in the process — obtaining visas — happened on March 5, said Heidi Shott, communications director of the American Friends of the Episcopal Diocese of Jerusalem, who initially launched the effort. On March 27, Ralph and Marc landed in Portland, Maine, where they were greeted by Shott, her husband Scott and Bishop Thomas Brown with whoopie pies — a Maine delicacy.

“To see Marc and Ralph walk down the escalator at Portland’s Jetport was a little bit like seeing a dream come true,” Brown told Episcopal News Service. “Of course, they were exhausted — it had been a 23-hour trip — but they were also excited. And so are we!”

The Zoorobs, who are in post-travel COVID-19 quarantine until April 6, virtually attended Easter Sunday service at St. Andrew’s Episcopal Church in Newcastle. St. Andrew’s — the Shotts’ home parish — is close to the boarding school, and parishioners have been participating in fundraising and anticipating their arrival for months.

“Lincoln Academy is their primary community in Maine, that’s true, but it’s totally inspiring to hear them speak about their faith, their desire to remain connected to God, and to be part of St. Andrew’s,” Brown told ENS.

Having met members of St. Andrew’s by Zoom over the past few months, the Zoorobs have a built-in community to support them as they settle into their new life. In an email to the diocese, Ralph Zoorob wrote, “I want to stay close with God, so I want to go to church whenever I can.”