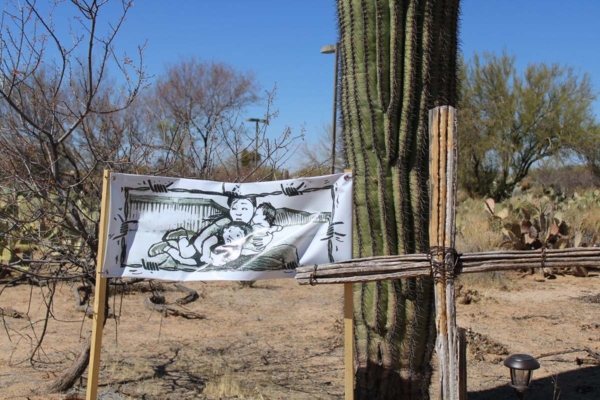 Artist Michelina Nicotera-Taxiera depicts Station III, “Jesus falls for the first time,” as a migrant mother falling to the ground while carrying her children through the desert in this March 11, 2021, photo at the Episcopal Church of the Apostles in Oro Valley, Arizona. Photo: Tony Gutiérrez/ENS

[Episcopal News Service – Oro Valley, Arizona] As Christians around the world recall the suffering of Jesus during Holy Week, one Arizona artist has found a way to unite Jesus’ suffering with the plight of migrants and asylum-seekers who attempt to cross the U.S.-Mexico border daily.

Michelina “Mick” Nicotera-Taxiera, a parishioner at the Episcopal Church of the Apostles here, created the “Migrant Way of the Cross” — artwork and meditations that tie the traditional Stations of the Cross with the present-day realities of many migrants.

Station XII, “Jesus dies on the cross,” for example, is represented with a row of crosses featuring the names and ages of children who have died in Border Patrol custody. Nicotera-Taxiera cried as she recalled the May 20, 2019, death of 16-year-old Carlos Gregorio Hernandez Vasquez at a Weslaco, Texas, detention center.

“It took a long time for him to die. Probably four hours before anyone checked on him,” she said, adding that these young children are simply “trying to help their families out.” 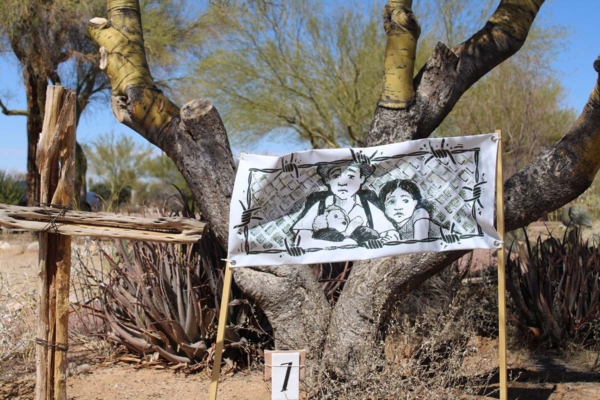 Station VII, “Jesus falls for the second time,” highlights the vulnerability of migrant children who are kept in detention centers by themselves. Photo: Tony Gutiérrez/ENS

The Migrant Way of the Cross is situated along an outdoor prayer trail on the campus of the Church of the Apostles. Every year, the parish tries to feature the work of a local artist on the campus, said the vicar, the Rev. Debra Asis. Previous artwork has included icons and migrant quilts.

“There’s an integrity to this walk. I really respect artists and the integrity of their work; these pieces belong together,” said Asis. “This is the walk as it was moved by the Spirit through Mick to give to all of us and the broader community.”

The Migrant Way of the Cross has drawn Episcopalians and pilgrims of other faiths. Asis, who is involved in ecumenical dialogue in the area, said she invited her counterparts to walk the prayer trail, and many have taken her up on that offer, bringing along their congregants. Visitors have included members of the local Church of Jesus Christ of Latter-day Saints, the pastor of the nearby St. Odilia Catholic Parish, Baptists and representatives of the local Jewish community. 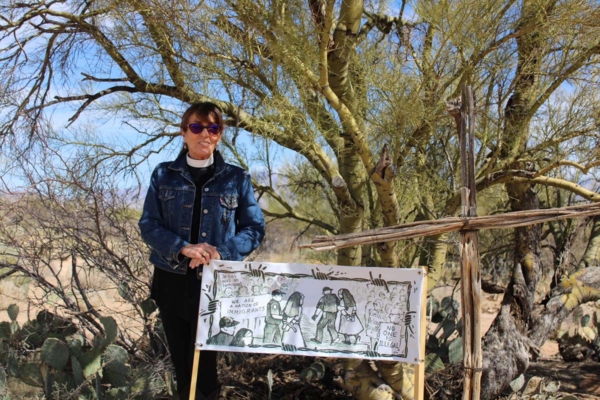 The Rev. Debra Asis, vicar of the Episcopal Church of the Apostles in Oro Valley, Arizona, stands next to her favorite: Station V, “Simon helps Jesus carry His cross.” Photo: Tony Gutiérrez/ENS

The Migrant Way of the Cross was originally scheduled to be displayed during Lent in 2020, but because of the shutdowns brought on by the coronavirus pandemic, it had to be postponed. Nicotera-Taxiera and her husband Franco Taxiera placed the images along the trail the weekend before Lent started this year.

Nicotera-Taxiera drew her inspiration from the art style she observed during a 1990 pilgrimage to El Salvador to mark the 10th anniversary of the martyrdom of the Catholic archbishop of San Salvador, St. Óscar Romero. March 24 is recognized as Romero’s feast day in both the Episcopal and Roman Catholic liturgical calendars, and he is among the 20th-century martyrs depicted at Westminster Abbey in London. Upon returning to the U.S., Nicotera-Taxiera created a Stations of the Cross series using the Salvadoran people as models for Jesus. 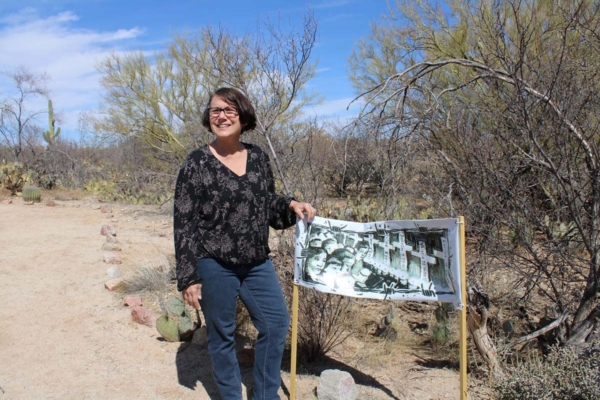 Artist Michelina Nicotera-Taxiera discusses her favorite piece: Station XII, “Jesus dies on the cross.” In this interpretation, she invites people to recall the children who have died in Border Patrol custody, including crosses with their first names and ages. Photo: Tony Gutiérrez/ENS

Nicotera-Taxiera said she looks to Romero for inspiration and intercession and reflected on the fact that, despite perceptions that he would maintain the status quo, he eventually developed the courage to challenge the oppressive regime in El Salvador.

“The part I love most about his story is that he didn’t start out brave, [but] realized later on in life, ‘That can’t be. I have to be a part of the solution,’” she said. “If you feel compelled to tell the story, then you have to have some courage.”

She revisited the project in 2019 after learning about the ongoing separation of children from their families when crossing the border. Pulling from the Eastern iconography tradition of “writing” the image as a prayer, Nicotera-Taxiera said she relied on the Holy Spirit to guide her. 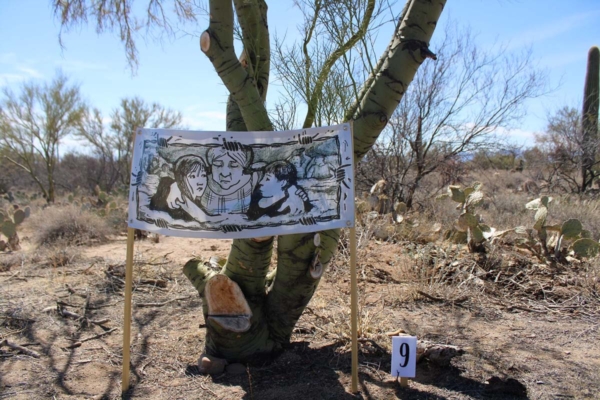 Station IX, “Jesus falls for the third time,” highlights the dangers and exhaustion facing migrant families as they cross the border through the desert. Photo: Tony Gutiérrez/ENS

“Every one of these I embodied and thought about deeply. Some of them I struggled with and had to redraw and redraw until I felt like it was saying what I wanted it to say. Or a lot of times, it was beyond me,” she said. “I mostly thought about what Jesus had suffered, and then how [that related] to people suffering on the border.”

For Nicotera-Taxiera, the migrants’ and Jesus’ plights are not simply united, but rather, Jesus is suffering alongside the migrants.

“Jesus is at the border helping people. I think I should be down there with them,” she said. “Whenever people are suffering, there Jesus is. It’s kind of our job, too, if we can just think of people as being Jesus.”

Seeing the “migrating neighbor” as made in the “imago Dei,” or “image of God,” is rooted in our baptismal identity as Episcopalians, said the Rev. David Ulloa Chavez, missioner for border ministries for the Diocese of Arizona. “We are called to ‘seek and serve Christ in all persons, loving our neighbors as ourselves, striving for justice and peace among all people, respecting the dignity of every human being.’”

“The challenge is to see and receive the embodied image of God in the migrating neighbor and also to recognize that the image that we bear is also being welcomed,” he said. We can both see and receive this holy embrace between neighbors by trusting God’s loving, liberating and life-giving help.

The response “is a recognition of the sense that we do have free will, but we also have limits, and we need the inspiration and strength of God to help us to live into this more faithfully,” Chavez said. 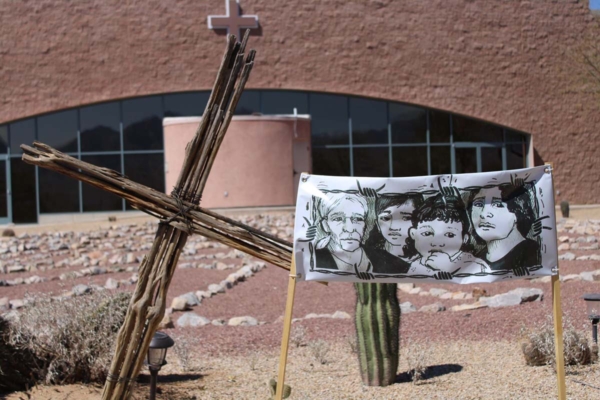 Gale Hall, coordinator of the missions team for the Church of the Apostles — of which Nicotera-Taxiera is a member — became emotional when looking at Station XIII, “Jesus is taken down from the cross,” which is also the inspiration for Michelangelo’s “Pietà” statue. Nicotera-Taxiera drew her own version of the “Pietà,” depicting a migrant woman holding her dying child in the midst of the desert.

Asis emphasized that the stations are not a political statement, but rather a challenge to recognize human dignity.

“I’ve had people say things like, ‘You know, I never really thought about them as people.’ This really touches home in a way that conversations don’t,” she said, adding that some migrants have died in the Arizona desert just 13 miles from the church property.

The vicar’s favorite piece is Station V, “Simon helps Jesus carry His cross,” which Nicotera-Taxiera depicted as the groups of Catholic religious sisters being arrested outside the U.S. Capitol after protesting U.S. immigration policy in July 2019.

“We have some very conservative and very progressive people. There were people who were coming in the run-up to the 2016 election who were saying, ‘I can’t talk in my church. I’m afraid to say anything,’” added Asis. “We have collectively sought ways to provide opportunities for people who are far apart in their beliefs, in their politics, in their traditions they like to adhere to, to be in conversation with each other and to realize that underneath all of this, we are humans.” 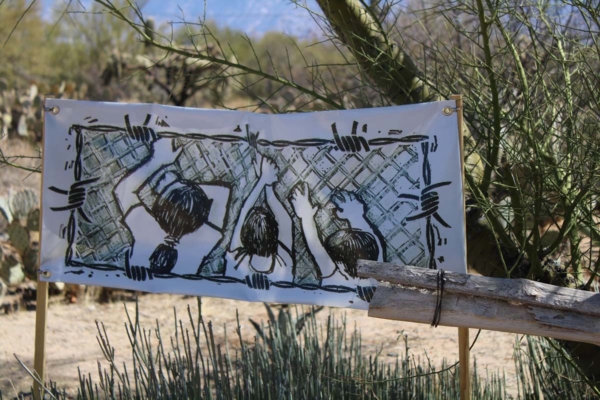 Station I, “Jesus is condemned to death,” highlights the plight of migrant children who are kept in detention centers by themselves. Photo: Tony Gutiérrez/ENS

For Hall, the Migrant Way of the Cross serves as a call to action. As coordinator of missions, Hall is working to facilitate volunteer opportunities for those who feel so inspired. Most of the team’s work is with the Casa Alitas program in Tucson, a short-term shelter for migrants supported by a multifaith effort and run by Catholic Community Services of Southern Arizona, the Catholic Diocese of Tucson’s Catholic Charities affiliate. The team also recently invited a representative from the local Unitarian church to discuss detention ministries.

Hall said she hears people respond to the stations with phrases such as, “I’m moved, and I don’t know where to go with this.”

Like many others, Nicotera-Taxiera has felt the emptiness that has come with the COVID-19 shutdowns. She hopes that people are able have some kind of spiritual experience in meditating on the Migrant Way of the Cross.

“Lent and Advent are my very favorite seasons of the church,” Nicotera-Taxiera said. “I love the whole feeling of waiting, so I think people are longing for that experience.”

The artwork and accompanying meditations for the Migrant Way of the Cross can be found at thewayofasylum.com.

– Tony Gutiérrez is a freelance journalist based in Cave Creek, Arizona, specializing in religion.