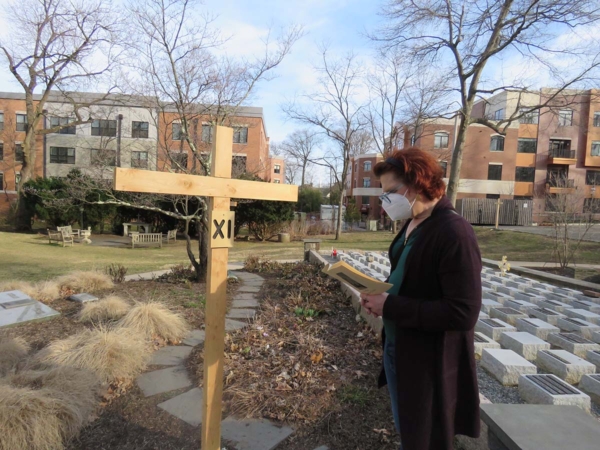 [Episcopal News Service] On a pilgrimage to the Holy Land three years ago, Adaeze Nwachuku prayed the rosary while walking the Via Dolorosa or “Sorrowful Way,” the path Jesus is believed to have walked on his way to his crucifixion.

This Lent, she walked that same path symbolically in the light of a setting sun thousands of miles away at an outdoor Stations of the Cross at her Episcopal parish, Christ Church in Short Hills, New Jersey. She stopped and gazed at each station, touching the trees on which they hung, while listening to an audio version of the traditional worship service.

“It was, for me, like being in Jerusalem and actually walking the path,” she said. “It moved me to a different space in life.”

Nwachuku is going through her own “darkness and wilderness” of chemotherapy. Walking and reflecting on the 14 stations showed her that Christ is “bigger than any treatment,” she said. “It was a huge healing moment.”

As many church buildings remain closed and worship services online because of the COVID-19 pandemic, some congregations are exploring new ways to offer spiritual experiences in an era of shutdowns and social distancing. In the Episcopal Diocese of Newark, Christ Church and Grace Church in Madison erected temporary outdoor Stations of the Cross for congregants and visitors to walk and pray by during Lent. 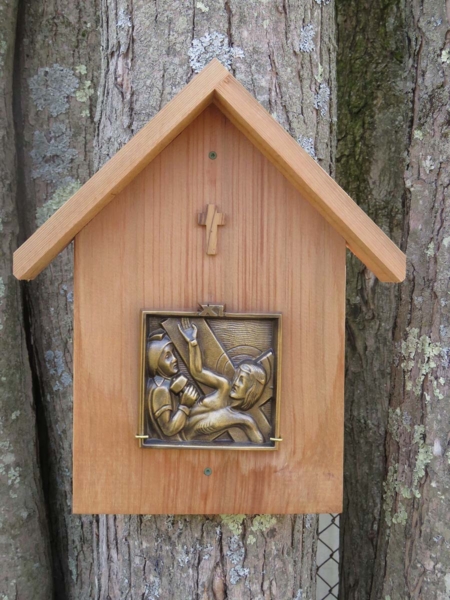 Christ Church wanted to share something in Lent with the community, as it had during Advent when the congregation placed lights in the churchyard trees to illuminate the neighborhood, said the rector, the Rev. Bowie Snodgrass. “It was really wonderful to have the light outside this year when we were not able to be in the church together.”

She conceived the idea for the Lenten stations while walking her daughter to nursery school. She noticed a line of trees along a retaining wall behind the church. “It was just a little Holy Spirit inspiration: We could put 14 stations and a box with a little explanation on those trees.”

They purchased a set of bronze plaques depicting the traditional stations that they found aesthetically pleasing – “and it wasn’t ‘blond Jesus,’” she said. A carpenter built structures to house them, mounting each plaque on a cedar plank with a small olive-wood cross above and an overarching roof. One-page handouts list the names of the stations along with some prayers.

“The idea was to have something that people could do on their own or with their household that was Lenten and meditative – not just the stations, but also the whole setting and context,” Snodgrass said. “We have one person who’s joined the church since the pandemic online who grew up here. He came to the stations, and he said he hadn’t been to the building since he was a Boy Scout.” 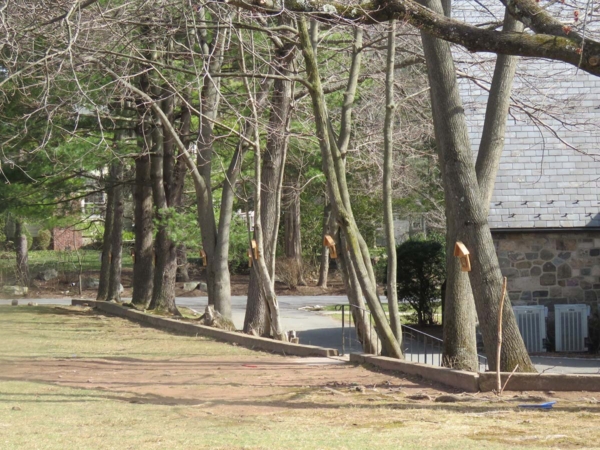 Christ Church in Short Hills, New Jersey, erected its outdoor Stations of the Cross on a line of trees behind the church. Photo: Sharon Sheridan

“I grew up Roman Catholic, so Stations of the Cross is like part of my DNA,” said Christ Church member Christopher Harlow-Jennings. At Catholic school, “we did stations every Friday in Lent during lunchtime.”

He continued to pray the stations in different settings throughout college, graduate school and beyond, including participating in a stations walk-through with the Calvary Episcopal Church youth group in Summit, New Jersey. One year, an artist led the youth in creating their own stations.

“Now, the thing is that church is all on the computer, and some of these opportunities to pray outside and to have prayer time in a holy place by yourself is sort of hard to come by,” Harlow-Jennings said. He walked the Christ Church stations on a sunny day, with children playing soccer nearby.

“It was peaceful,” he said. The images were “simple and moving.”

“The simplicity of this kind of lets you use your own mind to guide you,” he said. “I thought that was just beautiful.”

The ability to walk the stations physically while praying, observing the surroundings, touching the trees and listening to a recorded service that she brought with her made a huge difference for Nwachuku.

“I’m a tactile and auditory learner. I need to feel, touch, and I need to hear stories,” she said, explaining that storytelling is an integral part of her culture as an Ibo born in Nigeria.

Episcopalian Brigid Dwyer, who walked the Grace Church stations, noted that they are an “embodied worship style.”

The Short Hills stations face the back of the church, where the sights include a dumpster, concrete wall and chain-link fence.

“It is the least attractive part of our whole property,” Snodgrass said, “but I felt like that was also very relevant because Lent is when we examine the parts of ourselves that we try to hide away.”

Similarly, the Grace Church stations wind along the parking lot as well as through a memorial garden. Backdrops include trees and flowers in some places but a fence and apartment building in others. Background noise includes car and truck traffic, barking dogs and passing trains.

“That’s been a powerful part of the experience for people,” said the Rev. Susan Ironside, Grace’s rector.

Grace parishioners customarily pray the stations indoors at the church but couldn’t safely do that this year, she said. “This has brought a new sense of what it’s like to pray about a God who took on frail flesh. When you hear the world going on around you, it’s a very interesting way – and moving way – to ponder the Passion of Jesus when the town is going on about us as we have our life of prayer.”

Grace’s stations are simple wooden crosses, marked with Roman numerals. A booklet provides a map and traditional prayers and readings from the Book of Occasional Services. 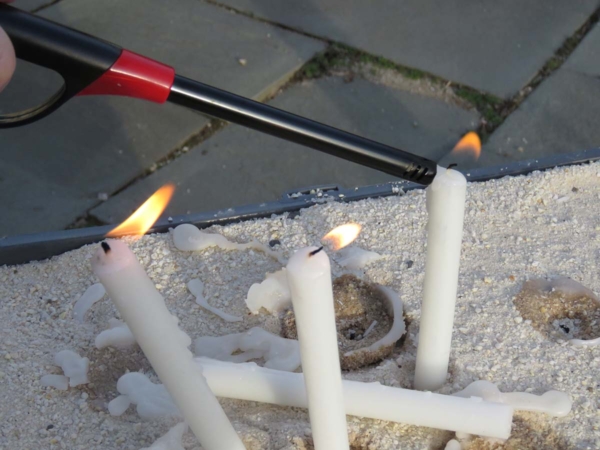 Worshippers can light a candle at the conclusion of the Stations of the Cross at Grace Church in Madison, New Jersey. “When I come to work, I see fresh wax. I see lovely evidence of God’s people at prayer,” says the church’s rector, the Rev. Susan Ironside. Photo: Sharon Sheridan

The journey “concludes at a large cross where we invite people to light a candle with their prayer offering and intention of some kind,” Ironside said. “When I come to work, I see fresh wax. I see lovely evidence of God’s people at prayer.”

The outdoor stations can be a less-intimidating way for non-church members to participate, she said. “It’s been a good way to connect with one another and with our community.”

Dwyer first visited the stations with two student colleagues from nearby Drew Theological School. “One of them said that they knew stations from growing up Roman Catholic, and the other one, I don’t think she had ever done stations before.”

For Dwyer, a lifelong Episcopalian, the stations are a treasured tradition.

“Stations is something I try to do as often as possible during Lent. I’ve been doing stations since I was a child,” she said. “A couple of years ago, I led a weekly stations at Christ Church, Bloomfield/Glen Ridge [New Jersey]. We divvied up the parts, just seven or eight people going around.”

While that church has “gorgeous” images, simply walking and praying Grace’s outdoor stations was spiritually fulfilling for Dwyer. “You didn’t need the images,” she said. “It was just as meaningful just going from bare wooden cross to bare wooden cross.”

In another Holy Week pandemic innovation, the Diocese of New Jersey church where Harlow-Jennings works as music director, St. John on the Mountain in Bernardsville, is planning an outdoor garden of repose where people can come and pray throughout the night on Maundy Thursday into Good Friday. This and the outdoor stations allow people to engage their faith in a new way while pandemic restrictions remain, he said.

“People are hungry for coming back to do something in real life, in person, and this is a chance to sort of nudge people into a different realm of prayer than they might otherwise be comfortable with,” Harlow-Jennings said. “It’s almost like a chance to rekindle older traditions.”

-Sharon Sheridan Hausman is a freelance journalist and a priest in the Diocese of Newark.