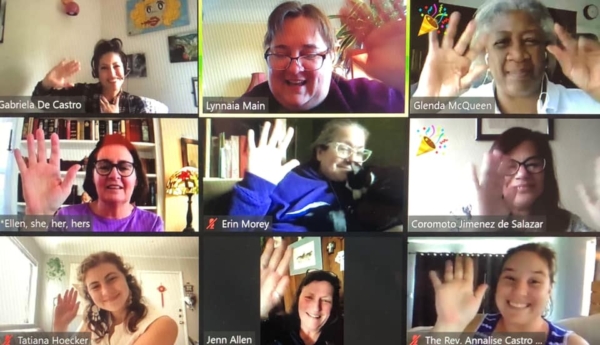 Members of the Episcopal delegation to the 65th session of the United Nations Commission on the Status of Women during a Zoom meeting.

[Episcopal News Service] As the 65th session of the United Nations Commission on the Status of Women, or UNCSW, comes to an end, the Episcopal and Anglican delegates to the mostly virtual conference are bringing back a message to the church: The work of gender justice is even more important in light of the COVID-19 pandemic’s disproportionate impact on women.

For the last two weeks, delegates have attended online meetings, learning about the challenges faced by women and girls around the world, and advocating for policies that align with the church’s mission. The top goals include increasing women’s access to decision-making positions, prioritizing issues impacting marginalized women, expanding education for women and girls, and eradicating gender-based violence.

This year, six Episcopal Church delegates represented Presiding Bishop Michael Curry – all from the same cohort selected for last year’s conference, which was disrupted by the COVID-19 pandemic. There were also delegates from the Anglican Communion and Episcopal Relief & Development.

“These wonderful women … have attended U.N. meetings, taking notes, reporting daily debriefs, posting [on] blogs and social media, said Lynnaia Main, The Episcopal Church’s representative to the U.N., during a Zoom debriefing session with the delegates on March 25.

“In terms of advocacy, we have sent word to member states … to share a written statement of priorities ahead of CSW, and we’ve sent comments on the [first and second] drafts of the agreed conclusion since arriving at CSW, most especially through direct communications with the U.S. mission to the U.N.”

Activities the delegates participated in included panel discussions on the role of faith communities in gender justice, a round-table discussion on intergenerational lessons and workshops on changing gender norms in the Democratic Republic of Congo and on advocating effectively in the digital era.

Many of the delegates said they were struck by the daunting challenges women worldwide face, as well by the sense of solidarity they experienced during the meeting. And this year, they said, COVID-19 was the lens through which all the issues were viewed – and magnified. Episcopal Church delegate Ellen Lindeen said that in the sessions she attended, she saw countries trying to advance women’s rights in “so many different ways.”

“[But] despite all this good work,” she said, “the global pandemic has interfered with progress and created a shadow pandemic” for women, who are disproportionately affected by economic crises, have less access to social protections and are much more likely to be health care workers or first responders, according to the U.N. The pandemic escalated the preexisting burdens of inequality.

“This issue was already there before COVID hit, but it’s been amplified, and many countries stated that the gender-based violence has doubled in the last year,” Lindeen said during the March 25 online debrief. “The pandemic has complicated everything, including access to health care and support, loss of jobs for women, an increase in unpaid work for women, frontline jobs by women that risk COVID infection, and gender-based violence.”

However, one silver lining of the pandemic was the virtual availability of the UNCSW conference, which made it far more accessible than ever before.

“That was really new experience, that this elusive, inaccessible event was suddenly open to all of us and has enriched the way we all think and talk about equality,” said Chiseche Mibenge, who attended on behalf of Episcopal Relief & Development, where she is director of gender initiatives.

On March 26, the delegates held a live, virtual closing worship service to celebrate and reflect on the work they did. Among the prayers they offered were the Gender Inequality Prayer created by Episcopal Relief & Development and prayers of thanksgiving for the ministry of each delegate.

“You were called together to serve the church at the United Nations,” said the Rev. Margaret Rose, The Episcopal Church’s deputy for ecumenical and interreligious relations, “to witness to justice and the kingdom of heaven. Together, you provided leadership and wisdom for this team in the spirit of Christ. You have helped your sisters to mark your direction and encouraged one another on your way.”