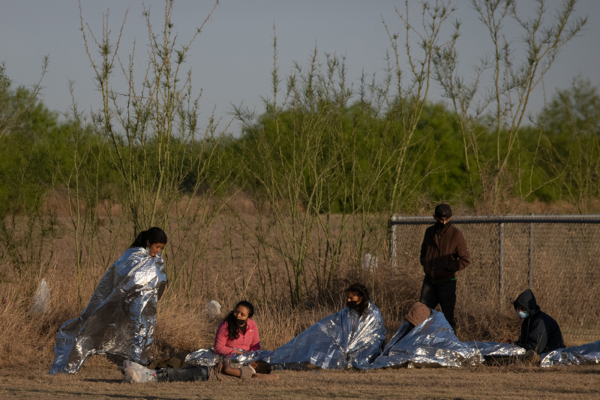 Asylum-seeking unaccompanied minors from Central America take refuge March 19 near a baseball field after crossing the Rio Grande into the United States from Mexico on rafts, in La Joya, Texas. Photo: Reuters

[Episcopal News Service] The Episcopal Diocese of San Diego is developing a plan with ecumenical partners in Southern California to provide spiritual support for hundreds of unaccompanied teenage migrants whom the federal government will begin housing starting this weekend at the San Diego Convention Center.

About 500 girls ages 13 to 17 are expected to arrive March 27, followed by another 500 or so on March 29, according to San Diego Bishop Susan Brown Snook. Her diocese was contacted this week by a federal contractor to help coordinate worship and chaplaincy services for the unaccompanied minors. Those plans are still taking shape.

“Really, we’re in the stage of figuring out what this might look like,” Snook said in a phone interview with ENS on March 26. “We’re basically building the plane while we’re flying it.”

Up to 1,400 unaccompanied minors eventually could be held at the convention center, she said, part of a wave of migrants that have crossed the U.S. border in the past two months as the Biden administration has sought to revise and, in some cases, reverse the Trump administration’s immigration policies.

The U.S. Border Patrol detained more than 11,000 unaccompanied minors in the first three weeks of March, after more than 9,000 such detentions the previous month, according to CNN. Individual children are only a fraction of the migrants apprehended crossing the border, many of them seeking asylum.

Local officials announced early this week that the San Diego Convention Center was one of the sites along the border where those children will be held while the federal government makes arrangements for them to stay with relatives in the United States or with foster families. Another large boarding facility already has opened at a convention center in Dallas, Texas.

The federal contractor overseeing social services for the unaccompanied minors in San Diego contacted the Episcopal diocese because of the diocese’s connection to Episcopal Community Services, a diocesan institution that provides services as a separate nonprofit. The diocese’s role in assisting the migrant girls will be limited to faith services.

Snook said the contractor’s request was for a religious services team – volunteers able to lead worship with the migrants, whose faith backgrounds range from Roman Catholic to evangelical. Episcopal leaders are working with local Roman Catholic and Lutheran leaders and other ecumenical partners to develop worship options.

The team could start with a Palm Sunday service on March 28, though plans are tentative and may depend on pandemic precautions. Snook told ENS that volunteer chaplains might be limited to those who have been vaccinated against COVID-19.

The chaplains won’t be involved with behavioral counseling, Snook said, but they may have opportunities to pray with the girls and provide other pastoral care upon request.

“We’ve been told many of these girls are deeply traumatized, and some are pregnant,” Snook said. “They’ve all been through terrible experiences, and they’re all without their parents.”

Border dioceses like San Diego have been doing “heroic work” in recent years as they live up to The Episcopal Church’s long legacy of serving refugees and migrants, said the Rev. Charles Robertson, the presiding bishop’s canon for ministry beyond The Episcopal Church. This still-developing opportunity to assist unaccompanied minors in San Diego coincides with the church’s ongoing call “to help folks who are trying to find new homes and new hope,” Robertson told ENS.

In recent years, the Episcopal dioceses along the southern border have prioritized ministries of support for asylum-seekers within their dioceses. Diocesan leaders have said their efforts to continue providing that direct support were complicated by the Trump administration’s “remain in Mexico policy,” which blocked migrants on the southern U.S. border from waiting in the United States while their cases are pending.

President Joe Biden vowed to reverse that policy while avoiding a surge of migrants on the border, but his administration still has faced the challenges of processing tens of thousands of migrants each month.

Biden, in a news conference on March 25, said the wave of migrants seeking to cross into the U.S. is partly cyclical, not solely caused by changes in federal policies. He rejected what he saw as the previous administration’s unprecedented decision to let migrants languish on the Mexican side of the border while they followed lawful avenues for seeking asylum in the U.S.

“I can’t guarantee we’re going to solve everything,” he said. “But I can guarantee you we can make everything better. I can make it better. We can change the lives of so many people.”