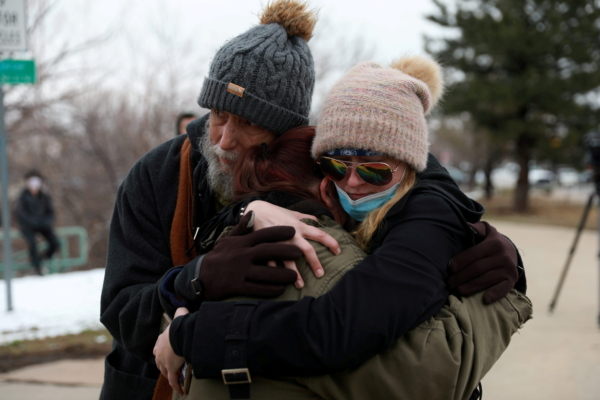 Sarah Moonshadow is comforted by David and Maggie Prowell after Moonshadow was inside King Soopers grocery store during a shooting in Boulder, Colorado, on March 22, 2021. Photo: Alyson McClaran/Reuters

[Episcopal News Service] As the United States grieves for its second mass shooting in a week, Episcopalians continue to respond with calls to action, pastoral care and prayer.

A gunman killed 10 people at a supermarket in Boulder, Colorado, on March 22, as Americans were still mourning the killings of eight people – six of them Asian American women – in Georgia on March 16. In addition, there were five other incidents around the country in the days between in which multiple people were shot.

“Let us be silent and humbled before the sense of violation this brings to us,” the Rev. Mary Kate Rejouis, rector of St. Aidan’s Episcopal Church in Boulder, told her parishioners during an online vigil hours after the shooting. Rejouis’ parish is across the street from the University of Colorado Boulder and is home to its Canterbury Club. She and her family were out of town at the time of the attack.

“So much was broken tonight, or perhaps the brokenness we live in was revealed here, as it was in Atlanta just a few days ago. I feel broken too — both for the reality of this experience today, and also for the truth of it — we know this ritual. Violence, devastation, prayer, come together, burials, grief, some hand wringing … until the next one. I have had enough of that,” she said.

Colorado Bishop Kym Lucas shared her reaction in a video message to her diocese the same evening, saying the back-to-back shootings left her heartbroken and angry.

“Coming so soon on the heels of the horrible massacre in Atlanta, I confess to you that this news was devastating to me,” Lucas said. “I am angry that we keep experiencing this kind of senseless violence, these needless deaths.”

Lucas and her local counterparts in the United Methodist Church and the Evangelical Lutheran Church in America offered a litany of prayers for the victims and the community.

Lucas is a member of Bishops United Against Gun Violence, along with Connecticut Bishop Ian Douglas, who told Episcopal News Service that the church’s response comes in several distinct forms during crises like these, including pastoral care, prayer, public witness and action. The group began to form in the aftermath of the 2012 shooting at Sandy Hook Elementary School in Newtown, Connecticut, an experience that continues to inform Douglas’ outlook on the problem of gun violence in America.

“We have to do something to address this pandemic of gun violence in our nation and in our culture,” Douglas told ENS, and he added that too many communities are now becoming familiar with these types of tragedies. Douglas reached out to Lucas to offer support after the shooting, saying, “We’re here for you. And we’re praying for you. And we know what it’s like to go through this in our diocese.”

Prayer, however, must be a catalyst for action, Douglas added.

“We do a lot of education … and then we are working hard for safe and sane gun legislation,” Douglas said. “So we don’t simply say, ‘We’re thinking of you and we’re praying for you.’ We are praying. But … we pray in order to act. We don’t pray because there’s nothing else we can do.”

The Episcopal Church, through its Office of Government Relations, has adopted and refined its policy positions on gun safety and gun reform since 1976, all stemming from General Convention resolutions. They include stricter gun licensing procedures, restricting assault weapons, requiring background checks and increasing funding for mental health treatment.

The Office of Government Relations issued an action alert on March 23, encouraging Episcopalians to write to their senators and urge them to pass two pieces of universal gun background check legislation currently before the Senate.

“Numerous polls show that a large majority of Americans, as many as 9 in 10 people, support universal background checks,” the action alert said, reminding Episcopalians that gun violence is a much larger problem than mass shootings alone.

“Over the past two weeks, we have once again seen mass shootings take the lives of Americans, most recently last week in Atlanta and last night in Colorado. While these tragedies generate attention and media coverage, we must remember the less visible but daily toll that gun violence takes on our communities through suicide, domestic violence, and other means.”

Through her anguish over the Boulder shooting and her dismay over the lack of action that has been taken to prevent incidents like it, Rejouis expressed a resolve to push for lasting change.

“The right end of prayer is action,” she said. “And no action any one of us takes on our own will be enough, but it will certainly not be enough if we collectively do nothing.”

That’s where the church, and especially groups like Bishops United Against Gun Violence, can play a major role, Douglas said.