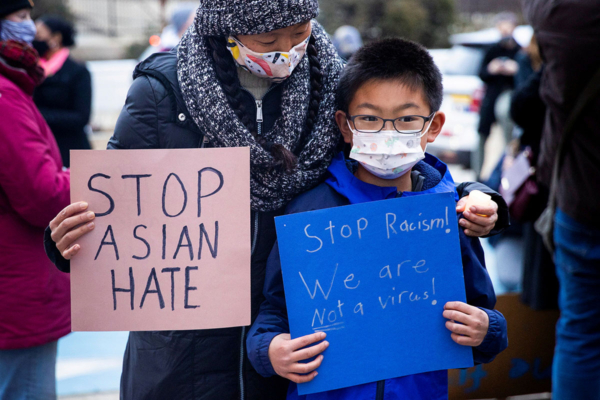 Melissa Min attends a March 17 vigil in Philadelphia, Pennsylvania, with her son James in solidarity with the Asian American community after increased attacks on the community since the onset of the coronavirus pandemic a year ago. Photo: Rachel Wisniewski/REUTERS

“I am filled with deep sorrow over the shootings in Atlanta,” Oregon Bishop Diana Akiyama, who became The Episcopal Church’s first Asian American female bishop on Jan. 30, wrote to her diocese.

“When I first heard the news, I was speechless. It has taken me a while to find the words because my first reaction was to weep and wail,” she said in the March 18 message.

Also on March 18, Presiding Bishop Michael Curry issued a statement about the killings.

“Wherever and whenever hatred or bigotry rises up and is directed at any child of God, we who follow Jesus of Nazareth and therefore stand for love, must act,” he said. “We must stand up, speak up and show up. Today we do so with and for our Asian American and Pacific Islander brothers, sisters and siblings.”

The shootings have again thrust the racism long experienced by Asian Americans into the national spotlight. Although local authorities have not yet confirmed a motive, the shootings are the latest in a series of escalating attacks on Asian Americans. Reported hate crime incidents against Asian Americans increased nearly 150% in the largest U.S. cities in 2020, according to a California State University study.

“There is fear among our Asian American congregations and communities,” the Rev. Winfred Vergara, The Episcopal Church’s missioner for Asiamerica Ministries, told Episcopal News Service, pointing to other recent attacks on Asian Americans in New York City. The primary cause of the attacks, Vergara believes, is the racist rhetoric used by former President Donald Trump and many of his supporters, blaming the COVID-19 pandemic on Chinese people. Many Americans, he added, do not distinguish among the many different Asian cultures, making anyone of Asian descent a potential target.

“As tensions between the U.S. and China increase and as the prejudice against Asians as ‘bringers of diseases’ continues, we predict there will be a continuing uptick of racist violence against Asian Americans,” Vergara said. However, he explained, the roots of this racism go much deeper; people of Asian descent have endured discrimination and violence as long as they have been in America.

The pandemic has exposed the white supremacy and racism that have “infected the soul of America for centuries,” wrote New York Bishop Suffragan Allen K. Shin in a March 18 statement sent to his diocese.

“It has played out in the racial inequalities with a devastating effect in the lives of the people of color in the marginalized and underprivileged communities in terms of the COVID infections and deaths, of the economic hardship and even of the vaccine rollouts,” Shin said.

Coinciding with the pandemic, the killings of Breonna Taylor, George Floyd and other African Americans offered further evidence of the white supremacist, racist structures and systems that are endemic in U.S. society, he said.

“During the pandemic we have also seen a dramatic surge of hate crimes against Asians across the country, particularly against the elderly and women,” Shin said.

An 84-year-old man from Thailand died after he was slammed to the ground in San Francisco, California; a 61-year-old Filipino man was slashed across the face with a box cutter while riding the subway in New York City; and a 56-year-old Malaysian man was attacked on the street in Chinatown in Manhattan. Then, earlier this week, the murders in Atlanta.

“Anti-Asian racism … is not new, but the ‘permission’ to openly act on it was given since the outbreak of the pandemic,” she said. Kim also co-leads The Gathering, a ministry of the Diocese of Los Angeles that provides a space for Americans of Asian and Pacific descent to talk about spirituality. She told ENS that she has been experiencing the hatred firsthand.

“Since last year, I myself have been avoided [in the] aisles of a high-end supermarket and screamed at by a [truck driver] in front of my house, which changed the dynamics of my everyday living,” she said. “Multiple Asian-targeted assaults have happened in my neighborhood also.”

In the New York City borough of Queens, Peter Ng, the former Asia-Pacific partnership officer for The Episcopal Church, has seen it too. Since he immigrated to the United States from Hong Kong, he has never felt afraid to leave his home until now. Since he retired, he has made a habit of walking around his neighborhood every morning. Now he and his wife aren’t sure that it’s safe to do that anymore.

“It’s getting more and more serious,” he told ENS. “Throughout my 50-plus years living in this country, I’ve never experienced the [anti-Asian] sentiment being so high.”

The church’s Asian American-focused ministries are responding to the increase in overt, violent anti-Asian racism and the fear that it brings with prayer, pastoral care and calls to action.

“The violence in our communities is staggering,” Akiyama wrote. “It is difficult to resist despair as we struggle with feeling helpless. … While reasonable laws about owning guns would help protect the innocent, the quest for peace will persist. We can legislate for civil peace, but no law will help us find spiritual peace … at least no human law.”

Kim told ENS that times like this underscore the importance of ministries like The Gathering that “provide a safe space to talk, unpack and share the pain and anger within the Asian American communities.”

“Absolutely there has been a need for pastoral care,” said the Rev. Peter Huang, co-leader of The Gathering. “Whenever The Gathering has held events this past year, our members have wanted to connect with others to find comfort, support and solidarity while living with this ongoing stressor.”

Kim added that her parish has also been a haven of support.

“I am a rector in a white-dominant parish, and I did receive overwhelming support from my congregation,” she said. “Not only Asians/Asian Americans are reaching out for help and pastoral care, but people who are aware of the severity and un-Christian nature of these incidents are looking to participate in ways that are practical and with unprecedented vigor – which is encouraging.”

However, providing a safe space for healing is only part of the church’s role in responding to racism of all kinds, Vergara said. It must be coupled with “a call for solidarity and making sure that Asian Americans and all ethnic peoples in this country be accepted as Americans and as integral parts of the life and future of the American church and society.”

Huang and Kim said the church should respond publicly and visibly to racial injustice. And last summer, they co-sponsored a vigil in solidarity with the Black Lives Matter movement.

“The church can be instrumental in combating racism and white supremacy,” Huang told ENS. “More immediately, the church can partner with organizations that provide education to raise awareness and advocate for change. The important and more difficult work is also for the church to actively work toward a multicultural church and confront its own institutional racism by examining current practices and power dynamics.”

Kim echoed Huang’s call for solidarity and action within the wider church, in addition to providing support and safety.

“Reach out to your Asian siblings of Christ with a word of encouragement and comfort. But do not end there,” she said. “Stand up against all forms of racial violence and hatred in our society as many other Asians stand with the Black communities in their continued struggle against the systemic racism and the culture of white supremacy.”