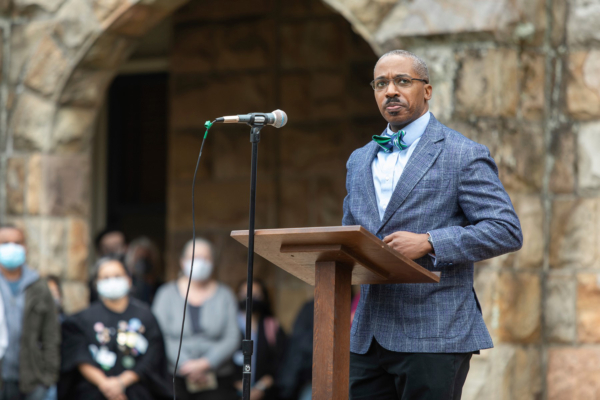 Editor’s note: This story points out the use of racially offensive language.

[Episcopal News Service] Officials at the University of the South, owned and governed by 28 Episcopal dioceses in the Southeast, are investigating a weekend incident in which some students shouted the N-word and other racial epithets at an opposing team during a lacrosse match hosted by the university in Sewanee, Tennessee.

“To our great dismay, a few of the Sewanee students hurled the most vile racial epithets,” Brigety said. “So pronounced were the shouted slurs in the third quarter that the game officials on the field ordered that Sewanee fans be cleared before play could continue.”

Brigety was elected a year ago as the university’s first Black vice-chancellor. Sewanee was founded in 1857 by a slaveholding Episcopal bishop and other pro-slavery Southern clergy who saw the university as a way to represent the interests of Southern slaveholding society. For nearly a century after the Civil War, Sewanee and its School of Theology refused to allow Black students to attend, and for most of its history, it maintained tributes to the Confederacy in monuments, names and symbols on campus, many of which have been moved or removed in recent years.

Even today, only about 3% of Sewanee students are Black, Brigety told Episcopal News Service in a Feb. 3 interview. “We have to do the work to figure out how we make Sewanee a place that is truly welcoming for everybody,” he said.

On Feb. 7 during a Sewanee worship service, the vice-chancellor revealed that vandals had repeatedly attacked the on-campus home where he and his wife and two teenage sons live. Brigety, who took office in June 2020, cited the incidents – from liquor bottles and other trash left on his lawn to threatening signs posted by his door – as a call to affirm Sewanee’s values.

Brigety has declined to elaborate on the nature of the threats, though “there were not any conventionally understood racial epithets included in them,” he told the Washington Post for an article this week.

Sewanee began researching and confronting the legacy of its past complicity in white supremacist systems in 2017 when it launched the Roberson Project on Slavery, Race, and Reconciliation. Citing some of the project’s findings, the Sewanee Board of Regents declared in a September 2020 statement that the university “rejects its past veneration of the Confederacy” and commits to “an urgent process of institutional reckoning.”

Brigety, in his March 14 letter to the campus community, said he wasn’t present at the March 13 lacrosse match but learned of the racist incident from Athletic Director Mark Webb. Brigety then went to the field, met with the team from Emmanuel College and apologized for the Sewanee students’ conduct.

“I told them that Sewanee does not tolerate such behavior, and that we considered the assaults on their dignity completely unacceptable,” he said.

On March 15, hundreds of students, faculty, staff and community members staged a walk-out and gathered on the campus’ quad to protest racism and racist incidents at Sewanee.

And on March 17, the Student Athlete Advisory Council organized a March Against Racism. Hundreds of students braved the rain to march across campus, according to a university Facebook post.

After this story was published, the bishops of the dioceses that govern Sewanee issued a statement, on March 18, condemning the racist incidents on campus.

Webb is conducting a comprehensive review of the weekend incident and will consider new protocols to prevent similar incidents at future sporting events, possibly by dispatching Sewanee staff and security to monitor fan behavior. Brigety said Webb also will meet with student-athlete groups to underscore Sewanee’s values, including treating competitors with respect.

“We are also determined to identify those who were responsible for yesterday’s hate speech so that appropriate measures can be taken,” Brigety said in his letter, adding that none of the offenders had yet been identified. He asked for anyone who knows who shouted the epithets to report that information to campus officials.

“Though this is a painful episode for our community, I am hopeful that the demonstration of our commitment to our values of dignity and decency will help us to heal,” Brigety said.