[Episcopal News Service] Episcopal clergy are highlighting The Episcopal Church’s support for LGBTQ couples this week while condemning an announcement by the Vatican that it would not allow blessing of same-sex unions because the relationships are seen by the Roman Catholic Church as sinful.

A Vatican office that handles matters of church doctrine was responding to questions about whether Catholic clergy can bless gay and lesbian couples. The office’s March 15 response, approved by Pope Francis, asserted that God “cannot bless sin.”

“These words injure LGBTQ+ people and all who advocate for justice and equity for all children,” Los Angeles Bishop John Harvey Taylor said March 17 in an email message to his Episcopal diocese in Southern California. The Vatican’s statement, he said, “risks putting a stumbling block between Jesus Christ and all who are spiritually hungry and who need and deserve the hope of resurrection.”

Newark Bishop Carlye Hughes called the news “a heartbreaker” in a video message to her northern New Jersey diocese. “I can’t speak for any other denomination. I can speak for mine. I want you to know that in this church … we recognize your goodness and we are delighted that we are all part of the same denomination, looking for God, celebrating God, sharing God’s love.” 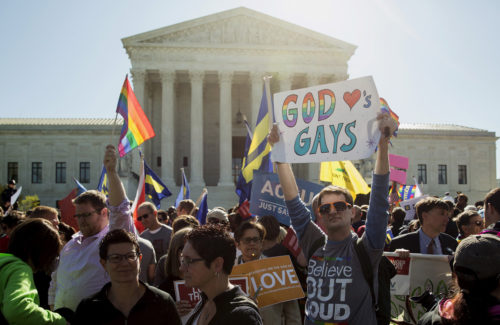 Supporters of same sex marriage rally in front of the U.S. Supreme Court before the court hears arguments about gay marriage in 2015. Photo: Reuters

The Episcopal Church’s General Convention first approved liturgies for blessing same-sex unions in 2012. After the U.S. Supreme Court legalized same-sex marriage nationwide in 2015, that year’s General Convention approved trial-use marriage rites for use by all couples. A follow-up measure in 2018 sought to ensure same-sex couples had access to those rites in all of the church’s domestic dioceses.

The Roman Catholic Church does not offer the sacrament of marriage to same-sex couples. In announcing its position against same-sex blessings, it sought to differentiate that prohibition from its efforts to welcome gay and lesbian Christians more fully into the church. God may bless them as his children, the Vatican said, but not their unions.

Some Episcopalians turned to social media to condemn the Vatican’s statement while affirming The Episcopal Church’s efforts to promote full LGBTQ inclusion in the life of the church, including the sacrament of marriage.

“As an Episcopalian, I am often glad that the Vatican does not speak for me,” the Rev. Mike Angell said on Facebook. Angell is rector of Episcopal Church of the Holy Communion in University City, Missouri.

“My church has learned to stand proudly with our LGBTQ+ members, to declare God’s blessing. I am also mindful that there are so many Roman Catholics for whom this document comes as a slap in the face. … The church’s role in blessing is simply to witness what God has already done. You are blessed. Your loved is blessed. No church can take that away.”

“We see you and experience you as true blessings, reflections of our living God,” Rickel said on Facebook. “Thank you for the inspiration and the many ways you show us how to love. Thank you for the gifts you bring to our collective body of Christ. Thank you for how you have blessed me and you bless this church.”

The Episcopal Church not only blesses same-sex unions but has gay clergy. An Episcopal High Mass is not that different from Catholic Mass. There’s always an alternative to the Vatican. https://t.co/3ZWzZCe9Hi

Sometimes I miss the Catholic mass, but then I read things like this.

Luke and I left 3 years ago and became members of The Episcopal Church, which is LGBTQ-affirming and supports equal rights for people of all genders. https://t.co/hlXn2w2JpM

The Episcopal church welcomes you… marries and ordains you too https://t.co/GjRjy0Rn4g

The Rev. Weston Mathews, rector at Grace Episcopal Church in The Plains, Virginia, also took issue with the Vatican’s justification, based in a claim that God “cannot bless sin.”

“The church has real sin to repent from. Can we stop scapegoating beloved people of God who seek love and care in this transitory life?” Mathews said on Facebook. “Sending love and light to LGBTQ+ Roman Catholic friends and family in Virginia and around the world who are in pain and mourning today. God loves you whether you’re single or married or in a relationship or [it’s] complicated.”

In the Diocese of New Jersey, Bishop Chip Stokes issued a statement of “sorrow and concern” and called the Vatican’s conclusion discriminatory and hurtful. Stokes also compared it to a recent anti-gay statement by the Anglican archbishop of Nigeria that labeled homosexuality a “deadly virus.”

“Both the recent Vatican statement and the statement of the Archbishop of Nigeria are unacceptable and dehumanizing of the people to whom they refer,” Stokes said.

“The witness, experience, faithfulness, and love of countless LGBTQ persons, many in exemplary, faithful partnered or married relationships, continues to evidence and reflect the divine love of God in Christ. This has been a great gift to us as church; one that we would urge other parts of the wider church to recognize, embrace and bless.”