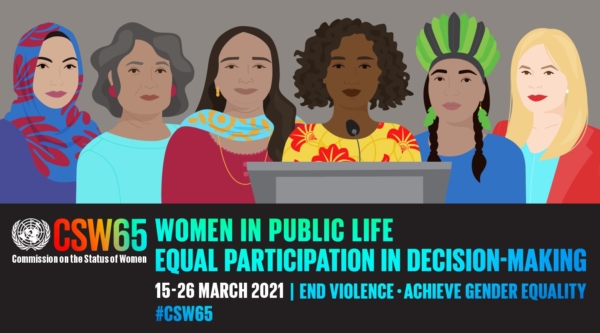 [Episcopal News Service] Members of the Episcopal delegation to the 65th United Nations Commission on the Status of Women, or UNCSW, marked the start of the conference on March 15 with a virtual prayer service, affirming their commitment to the advocacy work they will be doing for the next two weeks on behalf of women and girls around the world.

The U.N. conference, dedicated to the promotion of gender equality and the empowerment of women, has taken place every year since 1946, though last year’s was disrupted by the COVID-19 pandemic. Episcopal and Anglican delegates have participated in UNCSW since at least 2000, advocating for the priorities identified by the presiding bishop and the Anglican Communion.

For 2021, there are six Episcopal Church delegates named by Presiding Bishop Michael Curry and eight Anglican Communion delegates – each representing a different Anglican province. There is also a small delegation representing Episcopal Relief & Development this year. The Episcopal delegates observe the official meetings, represent the presiding bishop and the church, meet with U.N. officials and representatives of member states, and collaborate with interfaith and ecumenical partners. They also take what they’ve learned back to their own communities and pass it along to other women, said Lynnaia Main, The Episcopal Church’s representative to the U.N.

This year, of course, will be very different. Meetings mostly will be virtual, including all the parallel events that typically offer delegates valuable opportunities to network and influence policies on a more personal level.

“There are no coffee bar visits. … There’s no crossing each other in the hallway. None of that is possible,” Main told Episcopal News Service. “Basically everything we do is limited by our two-dimensional reality.”

But the delegates will still engage with the various events as much as they can.

“We’re not just there to network and learn about what’s happening,” she added. “We’re there to actually try to influence what the governments are doing during the meeting.

“Our delegates, when I say they’re representing the church, they’re sitting in front of their computer at a designated hour. Each person has signed up for a specific meeting that they’re going to attend.”

The Episcopal delegates are specifically advocating for priorities outlined in a document submitted to the U.N. by Curry, based on General Convention resolutions. Chief among those points – which echo the overall themes of this year’s meeting – are:

Despite the challenges posed by the virtual format, there may be better opportunities for such advocacy in 2021 than in previous years. Main was invited to attend a briefing on March 11 with President Joe Biden’s new mission to the U.N., including Ambassador Linda Thomas-Greenfield, to talk about U.S. priorities for UNCSW.

The presiding bishop’s delegates introduced themselves at a virtual meet-and-greet on March 11, sharing their backgrounds and what excites them about this work.

“I am really hoping to … experience and partake in this intergenerational dialogue that is so central to the work that bodies like the U.N. do,” said Maria Gonzalez of the Diocese of Olympia. “As a fairly young activist myself, I always love hearing the voices and the perspectives and stories of people who have been at this work for a really long time. … UNCSW is just such a great opportunity to be able to do that.”

On March 15, the first day of the UNCSW summit, the Anglican Communion and Episcopal delegations hosted a virtual noonday prayer service organized by the Rev. Jennifer Allen. Delegates offered prayers in four languages, incorporating meditations on the 12 areas of concern listed in the Beijing Platform, a landmark U.N. statement on women’s rights.

Members of the presiding bishop’s delegation also invite everyone to join them for a virtual debriefing presentation to the church from on March 25 and for a closing worship session on March 26. You can also follow and engage with them via social media.