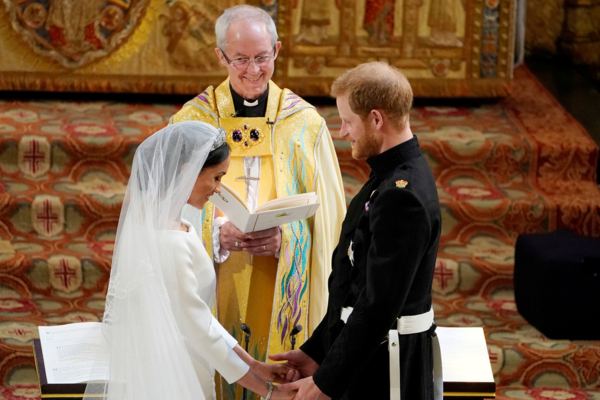 Prince Harry and Meghan Markle exchange vows in St George’s Chapel at Windsor Castle during their wedding service, conducted by the Archbishop of Canterbury Justin Welby on May 19, 2018. Photo: Pool via Reuters

[Episcopal News Service] The 2018 royal wedding is looking a bit less royal this week, after Oprah Winfrey’s interview with Prince Harry and Meghan Markle about their decision to quit the British royal family’s inner circle and move to the United States with their son, Archie.

But was the royal wedding even a proper wedding?

That question is up for debate, sparked by a brief comment made by Markle during the interview, in which she said the couple actually were married three days earlier, in a private ceremony with just Archbishop of Canterbury Justin Welby.

“We called the archbishop and we just said, ‘Look, this thing, this spectacle is for the world, but we want our union between us,’” Markle told Winfrey in the interview, which first aired March 7 on CBS. The couple’s private ceremony was held “in our backyard” at Kensington Palace, Markle said.

“Just the three of us,” Harry confirmed. 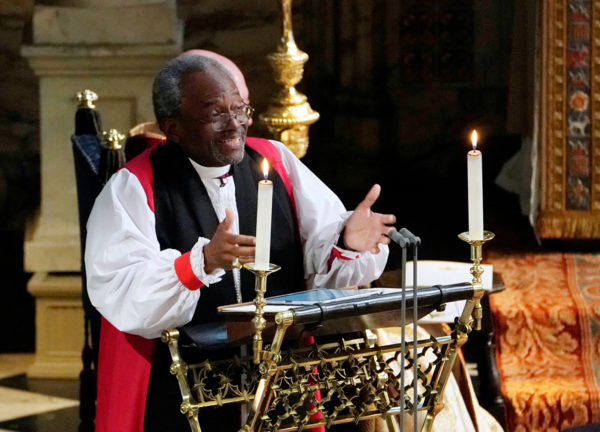 The Episcopal Church’s Presiding Bishop Michael Curry preached at the public ceremony on May 19, 2018, in Windsor Castle at the couple’s request, generating international acclaim for his sermon on the power of love. Welby, as head of the Church of England, presided over the royal wedding and solemnized the marriage, but under his church’s canonical law, a second wedding of the same couple is not allowed.

“A couple who are already lawfully married cannot choose to re-marry each other, unless there is some doubt as to the validity of the earlier marriage,” according to a clergy handbook.

Does that mean Curry preached at a wedding that wasn’t a real wedding? Not necessarily. The invalid ceremony might have been the private one.

A Church Times article noted that a Church of England marriage isn’t official unless it has at least two witnesses, in addition to the officiant. If Harry and Markle’s private ceremony with Welby included no other people, it may not have passed that test.

A spokesperson from Lambeth Palace, where the archbishop is based, declined to comment on the matter, according to the Church Times.

"The issues raised, particularly that of race, are concerning. While some recollections may vary, they are taken very seriously and will be addressed by the family privately." pic.twitter.com/Zbu1iNBlHO

The royal family reacted publicly to the interview for the first time on March 9. “The whole family is saddened to learn the full extent of how challenging the last few years have been for Harry and Meghan,” Queen Elizabeth II, Harry’s grandmother, said in the statement released by Buckingham Palace.

“The issues raised, particularly that of race, are concerning. While some recollections may vary, they are taken very seriously and will be addressed by the family privately. Harry, Meghan and Archie will always be much loved family members.”