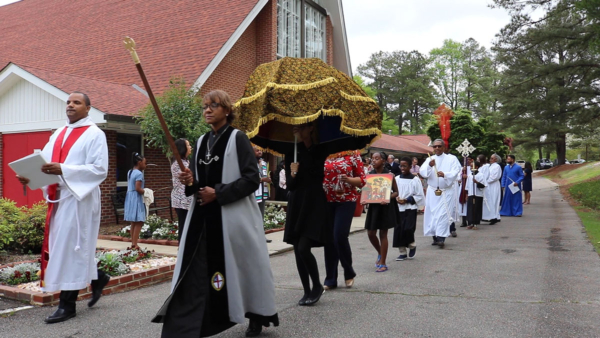 [Episcopal News Service] One of the great moments in 11-year-old Arri Davila’s life was hearing prayers of thanksgiving for the beauty of dreadlocks – hair like hers – at St. Ambrose Episcopal Church in Raleigh, North Carolina.

“They were talking about blessing people with locks, and me and my sister were really happy. It was very comforting because when we are at my mom’s church, we are the only two brown-skinned people there,” Davila told Episcopal News Service recently.

St. Ambrose, a historically Black congregation founded in 1868 on the city’s southeast side, intentionally incorporates Afrocentric icons and art, lively jazz-inspired music and inclusive prayers. The church also gives permanent recognition – even on needlepoint kneelers – to Raleigh native Anna Julia Cooper, the Rev. Pauli Murray, U.S. Supreme Court Justice Thurgood Marshall and other Black Americans who are commemorated in The Episcopal Church’s calendar of saints, as a way to “disrupt,” or separate, Christianity from a legacy of white supremacy, said the Rev. Jemonde Taylor, rector.

“It is challenging to become what you cannot see,” said Taylor, who recalled his own youth in a historically Black Episcopal congregation in his hometown Louisburg, North Carolina, where European images, formational materials, clergy, teaching and preaching created liturgies that did “more to reinscribe racism than disrupt it. Worship is central to who we are as Episcopalians, and that worship tends to replicate the very thing that we teach against, racism and white supremacy.”

Taylor said the legacy of white supremacy “continues to do excruciating damage, distorting the divine image in people.” While an engineering student at North Carolina State University, he took a course on intertestamental literature – the two-century period between the composition of the Old Testament and the first book of the New Testament – and discovered Ethiopian Orthodox Christianity. “The professor said Europeans thought the Book of Enoch was a myth until the Portuguese encountered the Ethiopians and found it in their canon. That blew up several paradigms I had. I didn’t know Ethiopians were Christians. I didn’t know anyone could educate any Europeans on anything Christian, since Christianity is a ‘white’ religion.

“I went to the residence hall and did an internet search on Ethiopia and Enoch, and the website for St. Mary of Zion Church in Washington, D.C., came up. There was an image of Mary and the Christ child. I stared at that image for 10 minutes because it was the first time I saw a truly authentic African representation of the Holy Family. Everything before that looked like the [Leonardo] da Vinci paintings with brown skin. And here, I saw people who looked like me.

“I did some more research and found that Christianity came to the horn in North Africa, not through European slave traders and colonialists, but through Jerusalem. I began using the term ‘indigenous African Christianity.’ It liberated me, as someone who grew up in the church, coming of age and wrestling with what it meant to be a Black Christian,” he said.

After seeing Ethiopian Orthodox imagery, Taylor adopted Ethiopia as a spiritual home, as opposed to Canterbury, though he stayed with The Episcopal Church.

“Some people would say, how can Black people adopt the religion of the enslaver, but it liberated me,” he said. “I had Ethiopia as my spiritual home, a Christianity to some extent untainted by white supremacy and colonialism.”

That experience in 2000 helped shift Taylor’s vocation to the Episcopal priesthood. That same year, Taylor witnessed two examples of Black leadership in the church that further inspired him. The first was seeing a Black man celebrate at the altar of the church of his youth.

“It was the first time in my life I had seen a Black man stand at the altar. I said, ‘Wow, I can actually see myself doing that.’ I was discerning a call back then even though I would not have articulated it as such,” he said. 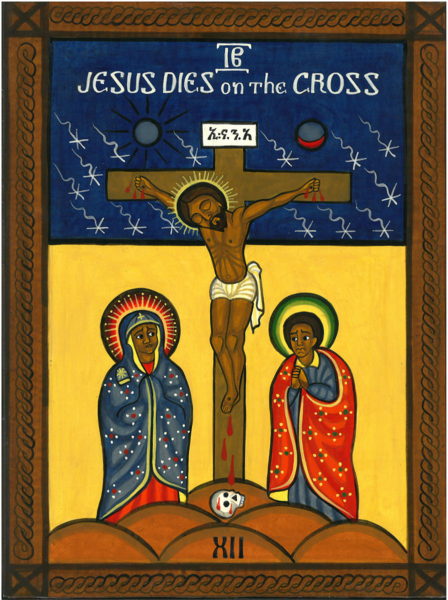 An icon depicting Jesus’ death on the cross is part of an Ethiopian-inspired Stations of the Cross at St. Ambrose Church in Raleigh, North Carolina. The icon was created by Christopher Gosey, of Holy Images Icons. Photo: Courtesy of St. Ambrose

Images of God often determine self-image and even perceptions of leadership qualities, says Steven O. Roberts, an assistant professor of psychology at Stanford University who studies race and racism.

“I grew up in almost an exclusively Black church, led by a Black female ministry, and in that church, there was imagery of a white male God that always stood out to me; an entity that didn’t really look like anyone in the church, and I always wondered how that affected us psychologically,” Roberts said in an interview posted on YouTube. In the interview, he discussed the findings from his studies, which show that how people visualize God predicts who they think is fit for leadership.

Roberts led researchers in a series of studies focused on U.S. Christians. In one case, they conducted a Google search of the word “God.” “We just typed ‘God’ into Google images to see how often God is portrayed as a white male,” Roberts said. “We found that about 72% of all the images that came up, that presented God in some kind of humanized form, did in fact, present God as a white male.”

Taylor’s quest to reflect the beauty of Blackness through prayer and worship led to a three-year search to commission Ethiopian iconography from Holy Images Icons for St. Ambrose as another tool to incorporate a more biblical view of Christ, a more diverse imagination of God and to “un-suture” or “decouple” white supremacy from Christianity.

He cited the work of J. Kameron Carter, professor of religious studies at Indiana University Bloomington, who believes “that Christianity midwifed the racial world … and must break with what it did.”

Jesus “became the slave to blow up the structure itself,” Carter said in a 2019 interview with “The Table Podcast,” a publication of the Biola University Center for Christian Thought, located in La Mirada, California. The episode, titled “Unshackling the Imagination,” focused on Christianity’s structural injustice and need for more culturally sensitive images.

“St. Ambrose is committed to the un-suturing of white supremacy from Christianity through worship and educational practices,” Taylor said. “The hope is to ensure all see themselves as beloved children of God. Worship spaces should be uplifting and community-centered, where one feels connected to the divine.” 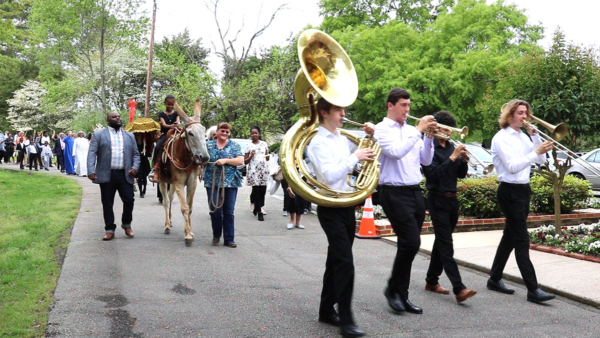 For Mellisa Smith, 48, who grew up in the Anglican church in Trinidad, a post-colonial nation rich in cultural and religious diversity with strong East Indian and African ties, attending St. Ambrose awakened awareness.

“After you have been here (in the United States) for a while, you feel like you don’t matter,” said Smith, who moved to the U.S. in 2000. “You are not represented, and representation matters. I never felt that before. I want to matter.”

And yet, “when Fr. Jemonde started to introduce the whole notion of representation, of Jesus looking like us, at first it felt like it was sacrilegious,” Smith recalled. Even in Trinidad, where approximately 35% of the population is of African descent, and 35% of South Asian descent and 25% of mixed races, “there were always stock images of a European Jesus.”

At St. Ambrose, church bulletins depict Black art and its social media posts feature Black saints. “To hear about Black people being saints, I didn’t even know that was possible,” she said. “I know that sounds really bad, but growing up, the saints were always European folks.”

The awareness has “raised my curiosity in my faith,” Smith said. “It gave me a deeper connection to God, a deeper knowledge that God cares about me because God can look like me.” Of critical importance, she said, St. Ambrose has created a space where her daughter, Maya, 13, feels that pride in Black culture “is normal.”

For Thomas Johnson, 56, St. Ambrose is the first church that feels like home, like family. Growing up in Ohio, he felt unwelcome in the Catholic church his family attended, often wondering, “Does God look like me?”

Years later, even at another historically Black Episcopal church, Johnson said, “there were white images, even though it’s a Black church in a Black community. It’s fascinating that you don’t question it. You’ve been surrounded by these images your entire life.”

Images that “have made me recognize white supremacy,” he said. “It made me realize how these images were intentional, a way of keeping you in your place and making you feel inferior. It was white supremacy at the highest level. … No matter what the depiction of Jesus is in the Bible or other spiritual texts, and what they say about Jesus’ hair or skin tone, it is not lived out in most churches.”

But at St. Ambrose, there is plenty of room for questions and no more wondering. “When you see an image of God or God’s son and it looks like you, it makes you feel good,” Johnson said.

He recalled his son, Jackson, several years ago, pointing out that the image of Jesus at St. Ambrose “looked like his good friend Eli, who’s Ethiopian.” His son, Johnson said, didn’t question his friend’s resemblance to Jesus because he wasn’t exposed only to the more Eurocentric images.

“They’re both 14 years old now, and it makes you realize how those other images made you feel like you weren’t a member in God’s family,” Johnson said. “I always hoped it would feel like this, but I never got to experience it till now. It was a profound moment in the context of the larger world, but in the context of St. Ambrose, it was just another family experience.”

It’s similar for Arri Davila, the 11-year-old who wears her hair in dreadlocks, St. Ambrose is “a cool place. It’s very diverse. It’s a very beautiful place … where Jesus is like life,” she said.

Her adoptive mother, the Rev. Mary Davila, who is white, recalled the moment when her daughters heard the blessing for the people with dreadlocks: “Both of our girls have locks, and their little faces just lit up. To have their tradition and their beauty called forth and blessed in church, I can’t tell you what a gift that is.”

Davila, a priest, serves part-time at Christ Church, another Raleigh congregation, but has attended St. Ambrose with her adopted daughters twice monthly on her Sundays off. Elsewhere, her daughters’ hair has evoked uncomfortable responses, she said.

“Out in the world, more commonly, they have people reach for their hair and touch it and ask questions about it, and they don’t always stand tall in their hairstyle. But, to hear that God sees you as beautiful, I can’t tell you the value of that.

“To have visual representations of Jesus at St. Ambrose, whose skin color is much darker than what we’re used to seeing in the literally white-washed Bible,” is a blessing and a gift to the entire family, Davila said.

– The Rev. Pat McCaughan is a correspondent for Episcopal News Service. She is based in Los Angeles, California.