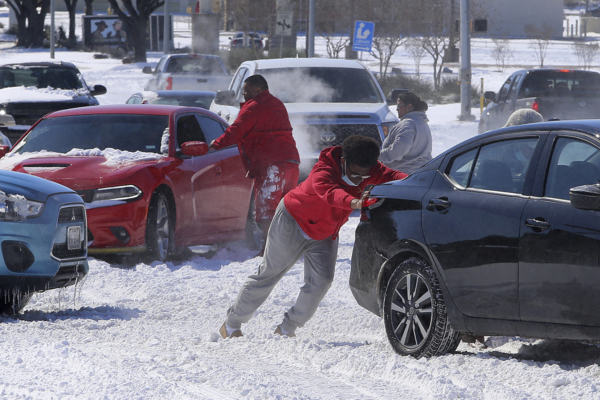 People push a car free after it spun out in the snow Feb. 15 in Waco, Texas. A winter storm brought snow, ice and plunging temperatures across the southern Plains and caused a power emergency in Texas. Photo: Associated Press

[Episcopal News Service] A combination of low temperatures and rare snowstorms have created a winter weather emergency across the South, with Texas facing some of the region’s direst conditions, from widespread power outages to a deadly traffic pile-up.

The cold-weather crisis also has disrupted parish life for many Episcopal congregations as church leaders and members respond to the sudden needs of people in their community who are suffering through the unforeseen disaster.

St. Matthew’s Cathedral in Dallas, Texas, posted photos on its Facebook page of snow covering its roof and then announced that the latest winter storm had forced the cancellation of in-person Ash Wednesday services. When another Dallas congregation, the Church of the Transfiguration, canceled its in-person services, it spent Ash Wednesday dealing with a developing catastrophe: a flooded church.

One of the pipes in Transfiguration’s fire sprinkler system had ruptured in the freeze, leaking enough to fill the church’s nave with several inches of water, the Rev. Casey Shobe told Episcopal News Service by phone. A neighbor walking by heard an alarm inside the church and notified a parishioner, prompting a team of volunteers to respond and to drain the water.

Shobe, Transfiguration’s rector, said the extent of any damage to the stone floor or pews won’t be clear until an inspector can visit. The church has been lucky enough to maintain power throughout the cold weather, though some parishioners are suffering through outages, cold homes and burst pipes, as well as immobility from dangerous road conditions.

“Being without power for days on end, it has been emotionally and practically challenging for the people of our church,” Shobe said.

About 3 million homes and businesses in Texas were without power earlier this week, but by Feb. 18, the outages had fallen to about 500,000, according to the Associated Press. Millions have been advised to boil their drinking water.

In addition to the outages in Texas, hundreds of thousands of customers are without power from Louisiana to Virginia. More than 30 deaths have been blamed on the severe weather this week.

The Diocese of Dallas has been spreading the word about warming shelters and promoting donation drives to provide food, blankets, coats and other winter gear for those in need in the region.

Residents in the Waco area can warm up at St. Alban’s Episcopal Church in the Diocese of Texas. St. Alban’s is calling for volunteers and donations to support its efforts.

In the Diocese of the Rio Grande, St. Paul’s Episcopal Church in Marfa, Texas, also is serving as a warming shelter. On Feb. 18, with a high in the 20s, the community received another 4 inches of snow while dealing with the latest power outages, according to the Rev. Michael Wallens, St. Paul’s vicar.

“You just have to sort of keep on your toes,” Wallens told ENS by phone. Earlier in the week, the temperature dropped as low as zero, and the wind is strong in the Big Bend region near the Rio Grande. “We’re not used to this at all. We get sprinklings and dustings [of snow] once in a while, but it’s really never gotten this cold.”

Texas Bishop Andrew Doyle took to Twitter on Feb. 17 to offer support for congregations and parishioners in his diocese who are serving their communities as they try to stay warm.

“This is a statewide crisis. Our churches while dealing with their own crisis are helping, delivering food, and opening as warming stations,” Doyle wrote. “I’m so grateful for our parishioners and so many others who are helping. I’m grateful for those trying to get electricity to everyone, those who are saving people from fires caused by people trying to stay warm. So many people in goodness and Grace leaning towards one another.”

I’m so grateful for our parishioners and so many others who are helping. I’m grateful for those trying to get electricity to everyone, those who are saving people from fires caused by people trying to stay warm. So many people in goodness and Grace leaning towards one another.

The Rev. Billy Tweedie, a priest at Church of the Resurrection in Austin, Texas, spent part of his day Feb. 15 on the city’s streets looking for people struggling with homelessness and offering to help them find warm shelter, according to a KXAN-TV report. And in Denison, Texas, north of Dallas, St. Luke’s Episcopal Church continues to open its doors to homeless residents looking for a hot meal and a warm place to stay. The church’s homeless ministry is 10 years old, and its warming center opened two years ago, according to KXII-TV.

“Whether they live in a big fancy home or whether they live literally on the street, we approach and we treat them equally,” the Rev. Don Perschell, St. Luke’s rector, told the TV station. “The coffee pot will be on all night long.”

Many of the churches in the Diocese of Fort Worth are without power and unable to offer shelter, and many roads and church parking lots are still covered with ice and snow, said Katie Sherrod, the diocese’s communications director.

“Clergy are checking on folks by phone and text and coordinating offers of shelter from those who have heat to those who don’t,” Sherrod told ENS by email. “But the biggest hurdle is transportation. It is very dangerous on the streets, even for those wanting to deliver blankets and sleeping bags.”

She pointed to 4Saints Food Pantry in Fort Worth as one of the bright spots in the diocese’s response. Despite the cold weather, it was able to open Feb. 12 for its regular Friday hours and served nearly 100 families, Sherrod said. It won’t be able to reopen on Feb. 19, however, because of icy conditions.

Transfiguration in Dallas, despite maintaining power, hasn’t opened its building for use as a warming station, out of concern that travel to the church could lead to crashes while the city’s icy streets remain mostly “undriveable,” said Shobe, the rector.

“In a city like Dallas, 4 or 5 inches of snow shuts the city down,” he said, because the city doesn’t have the equipment or cold-weather infrastructure to respond like a Northern city would.

The high temperature of 26 on Feb. 18 still won’t thaw the city, he said, though warmer weather is in the forecast for next week. Until then, church leaders are using phone trees to check in on parishioners during this seemingly unprecedented crisis.

“No one can ever remember there being something quite like this,” Shobe said. “And we were certainly not prepared, as a state and a region.”